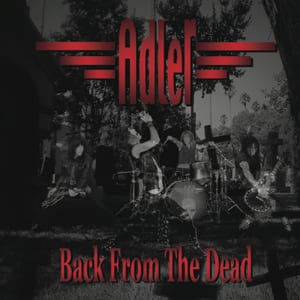 Well, here comes the time when ex-Guns N’ roses skinman occupies the headlines for all the right reasons and not for the usual stuff (eg. statements about Axl Rose or how he managed to kick out his bad drug habits). In addition, it is surprising the fact that Steven Adler managed to release something as fresh, inspiring and rejuvenating as “Back From The Dead” and at the same time he didn’t fail to pay tribute to his past. Truth be told here, I didn’t expect such a qualitative job by Adler as I was aware of his health issues but also of his rather typical street rock n’ roll sound with Adler’s Appetite.

“Back From The Dead” should be seen as a crossroad where the past and the future of hard rock music meet in an harmonic way, really. Just imagine the melodic side of Guns N’ Roses (without being copycats at any point) with the modern touch –in the compositions and the production- of bands like Hinder and Nickelback. I don’t know whose idea it was to hire the three other members of the band, but I must say that the guys are doing a hell of a job and helped Adler bring forth the majestic rock that was so much needed and anticipated of him. Last but certainly not least, the production is forwarded towards the American radio and the American Youth in general.

Highlight: Steven Adlers succeeds in stepping out, at last, from the Guns N’ roses shadow…it took him almost 25 years and we wish him wholeheartedly all the best in the future!