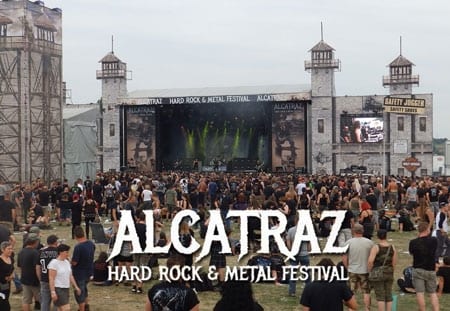 I believe that many a times big festivals can be rather tiresome rather than give the opportunity to someone to acquire a complete picture for bands of a wide spectrum which cannot be experienced otherwise.  And not to beat around the bush, it is much preferable to see ten great bands a day on one stage, rather than hover around three or more stages so getting glimpses of many bands and have an incomplete experience about their performance.

Alcatraz Festival in Kortrijk, Belgium was one of these cases.  Unfortunately, I was only able to attend the first day of the festival due to personal reasons, making sure, however, to get a full report on it from elsewhere.

Let us see…..what the story was in Alcatraz, leaving the organization aspect, something totally foreign for Greek events, for last.

Upon my entrance to the festival at around 11.30 I managed to see Wolf while finishing their set. Although I cannot say that I had a clear picture of their performance, I was informed that they did pretty well. For the record, their set list was:

Up next were Armored Saint. Defying the big stage for them the band electrified the audience with classic songs as well as others from their new album.  Bush and Vera gave an excellent performance once again. 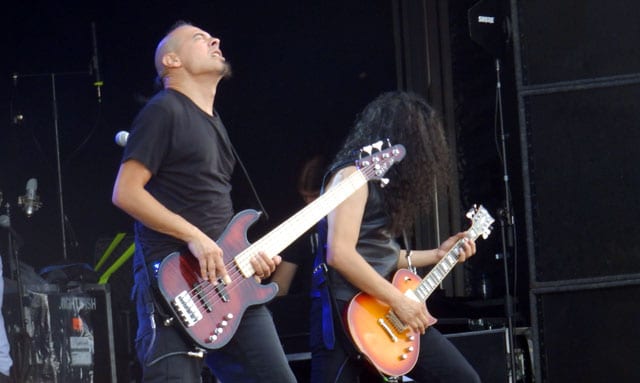 Death Angel, who came on next, were the real masters of thrash metal attitude ‘transporting’ the audience to the bay area of Los Angeles with the energy and the passion that defines then and with singer Mark Osegueda leading the way.

Set list: Left From Dead, Son Of The Morning, Claws In So Deep, Buried Alive, Seemingly Endless Time, The Dream Calls For Blood, Caster Of Shame, Mistress Of Pain, Thrown To The Wolves. 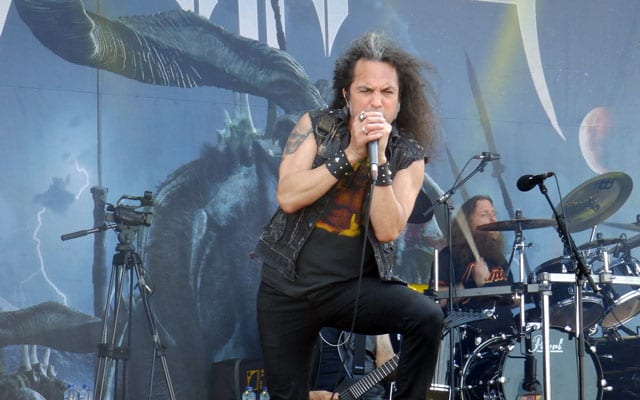 Moonspell are thought to be less effective while playing under the hot sun of midday and definitely require an indoor space in order for their show to be immaculate. How wrong can some people be? This could have been the case elsewhere! On the magnificent stage of Alcatraz, under a merciless hot sun, Fernando Ribeiro and his gang were just mesmerizing. We witnessed the great setting of the Portuguese, as well as an outstanding performance of a band that is famous for their live shows, something they proved once again.

Setlist: Breathe (Until We Are No More), Extinct, Night Eternal, Opium, Awake!, The Last Of Us, Medusalem, Alma Mater, Full Moon Madness 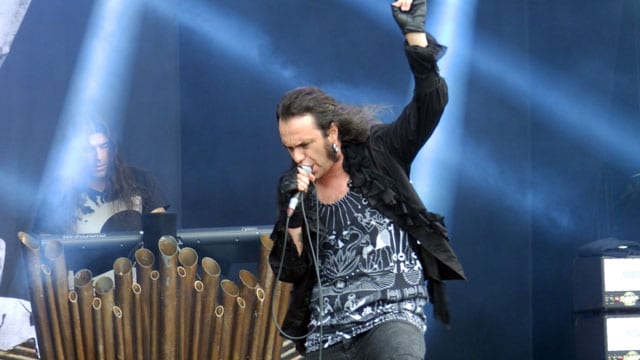 The baton was handed on to Queensrÿche, who completed the last show of their European Tour. Little can be said about this unique band from Seattle. Reborn, refreshed and with a brilliant stage appearance, Queensrÿche seem to be enchanting the audience with the diamonds of their first albums as well as with the newly born “Arrow Of Time” from their upcoming album “Condition Human”. It was a captivating performance, yet they were given an unfair lineup. God knows why they played before Overkill and W.A.S.P.

Setlist: Anarchy X, Nightrider, Breaking The Silence, The Whisper, En Force, The Needle Lies, NM 156, Arrow Of Time, Eyes Of A Stranger, Queen Of The Reich, Take Hold Of The Flame 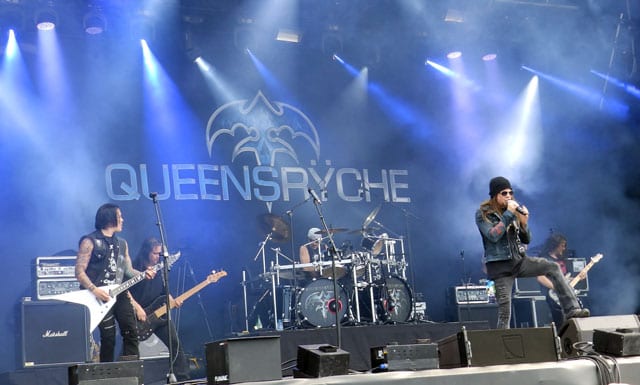 Moving on, Michael Schenker and his band were quite enthusiastic, yet I was not that impressed. I think that it was a bad day for Doogie White who did not manage to keep the standards especially when it came to songs by UFO and Scorpions. Overall, we are talking about an average performance, maybe the lowest of the festival, despite the desperate efforts of Schenker, Buccholz and Rarebell.

Setlist: Doctor Doctor, Live And Let Die, Lights Out, Vigilante Man, Natural Thing, Before The Devil Knows You’re Dead, Lovedrive, Lord Of The Lost And Lonely, Rock You Like A Hurricane, Rock Bottom 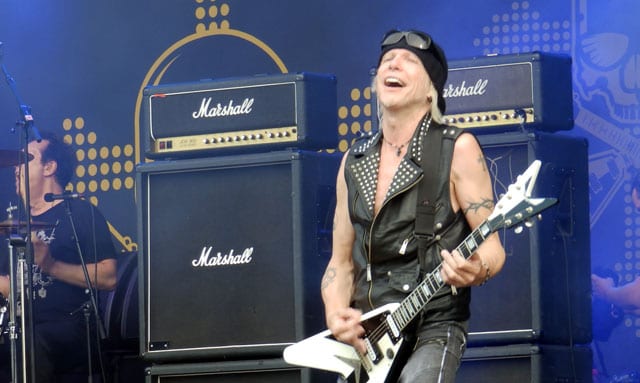 I haven’t been a devoted Overkill follower for the past few years. However, I was gob smacked by what I saw. An extremely tight and experienced band got the ‘thumps up’ and stimulated a lot of people who considered them forgotten.  Once “In Union We Stand” was played, I was taken back in time, in the early 90’s when I was waiting in anticipation for Headbanger’s Ball on MTV to begin, with the remote control in my hand. I have to say that I was deeply touched.

Setlist: Armorist, Hammerhead, Electric Rattlesnake, In Union We Stand, Rotten To The Core, Bring Me The Night, End Of The Line, Hello From The Gutter, Ironbound, Elimination, Fuck You 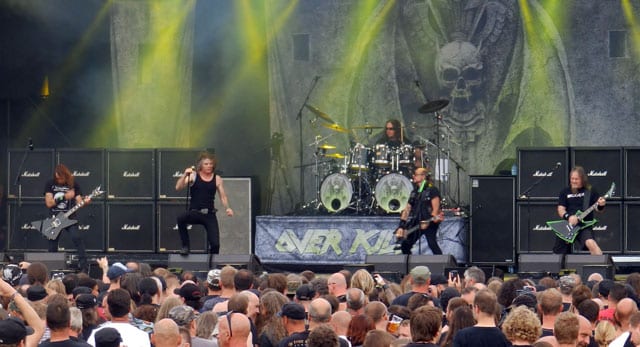 W.A.S.P. fans have gathered in front of the stage so that to get the best views of Blackie….and the rest of course. A mediocre performance with songs only up to “ The Crimson Idol” and the first two as a base. I have seen worse of W.A.S.P., but then again, I had caught myself thinking exactly the same thing the last time I saw them: Blackie must hold the guitar out of habit or for image purposes! Poor Doug Blair plays everything in the band and on top of that he has to work with the detestable, to me anyway, Mike Duda. They could obviously have played something more recent as their last albums were pretty good. They also have a new album cooking in the near future.

Setlist: Intro/ On Your Knees, The Torture Never Stops, The Real Me, L.O.V.E. Machine, Wild Child, The Idol, I Wanna Be Somebody, Chainsaw Charlie (Murders In The New Morgue),  Blind In Texas 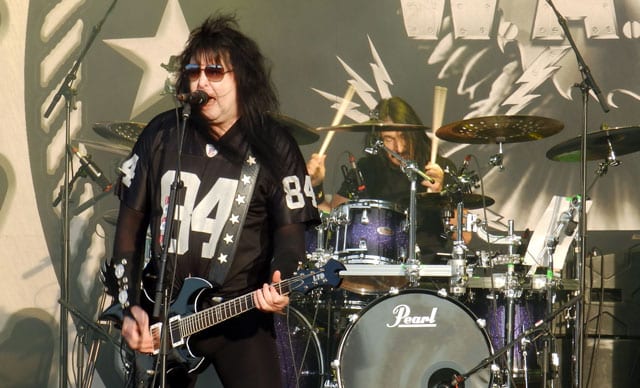 We were forced to depart straight after the W.A.S.P. appearance due to other commitments.  A dear friend, who wishes to remain anonymous, stayed until the end offered to take over the coverage of the rest of the festival for me.

Trivium did not manage to deliver what was expected by the audience. They appeared to be frozen at the beginning, not saying that this brought complete disaster of course. Their stage set and performance was amazing as far as music is concerned. Perhaps they are not ready yet to carry the weight of such a good lineup in grand festival like Alcatraz.

Setlist: Brave The Storm, Down From The Sky, Becoming The Dragon, Strife, Pull Harder On The Strings Of Your Martyr, Built To Fall, Throes Of Perdition, Anthem (We Are The Fire), Black, Blind Leading The Blind, Dying In Your Arms, In Waves 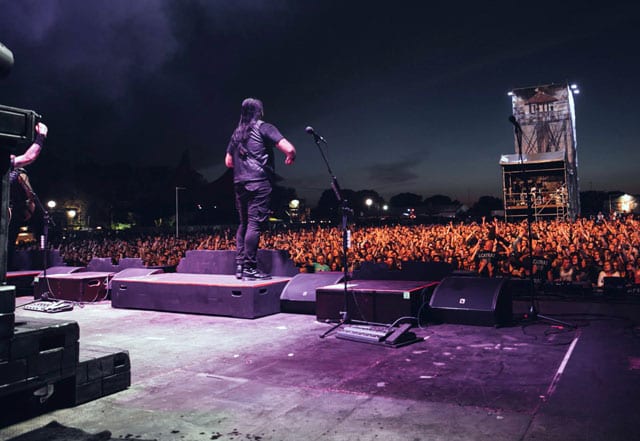 The time for the headliners of the first day of the festival had come. Nightwish having a great stage setting and Floor Jansen conquering the stage with her impressive presence was, from the looks of it, what the thousands of their fans were expecting to see. Fires, explosions and exquisite performances created a very explosive atmosphere and gave the perfect ending to the day after a 90 minutes’ worth of great show. 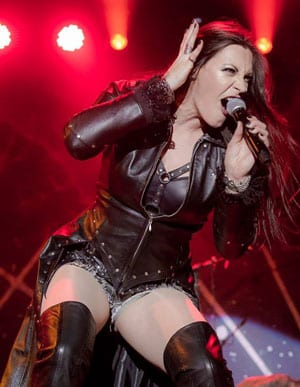 The highlight of the Finnish’s appearance was “Stargazers” for sure, one of the most favorite songs of Nightwish supporters.

Apart from the immaculate conditions under which this festival was conducted, the food and drinks points, WC, VIP, merchandise etc, what really did it for me was the stage. Completely covered up top, back, right and left, supported by incredible lights and sound equipment reinforced and enhanced  each band’s performance to the max. All the bands, from the most recognized to the smallest, experienced the respect by the production team and had access to everything a decent musician may need during a performance.

Getting to Kortrijk, there was a huge parking lot for cars (on tarmac and not on soil mixed with mud and tree branches). In addition, coaches transported people to and from the festival area completely free of charge.  That’s what any decent festival ‘goer’ should encounter anyway! 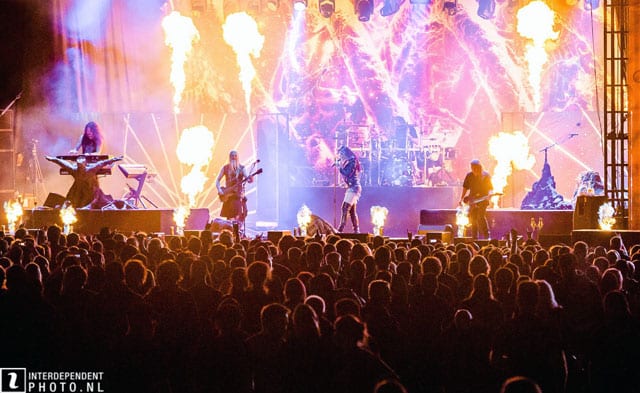