This has been the longest European tour of the band from Bellevue for many years. Twenty performances in twenty different countries and leaving us with the best of the impressions is the outcome of this summer’s Queensrÿche‘expedition’ through Europe.

We chose the last part of this tour in order to follow the band during their last 6 performances- a very wise move, I think- so as to draw some safe conclusions about the band’s progress at the time being. So here we go…

Club Melkweg in Amsterdam is our first stop where Beyond the Black is the opening act. They are a German female fronted metal band which resembles Delain in many ways and have managed to attract many supporters, myself being one of them. They took full advantage of their thirty minutes on stage introducing their debut album “Songs of Love and Death” with singer Jennifer Haben mesmerizing the audience with her superb voice as well as her stage presence.
Armored Saint came up next.  The American legends appear to be in a great shape not allowing their previous absence to affect the quality of their work on stage. Excellent performance not only  by the five musicians, but also by John Bush’s young son who got on stage for “Can U Deliver” demonstrating his skills on vocals as well as his guitar playing.

Introduction, “Anarchy X”, “Nightrider” and… Queensrÿche! Incredible power, temperament, magnificent performance and a unique act altogether! And all these with Todd La Torre feeling under the weather. The signs of his illness were noticeable not after the 65 minutes of the Queenÿsrche performance since until then the band offered breathtaking moments playing songs from their early years up to the “Empire” era, as well as the brand-new “Arrow Of Time” from their upcoming album “Condition Human” which will be released on the 2nd October 2015. The Dutch audience appeared to be very keen on “Arrow Of Time”, a song which is promising a very warm welcome for the new album.

At this point I would like to highlight that Queensrÿchehave completed a number of 1’500 performances in their professional music history. 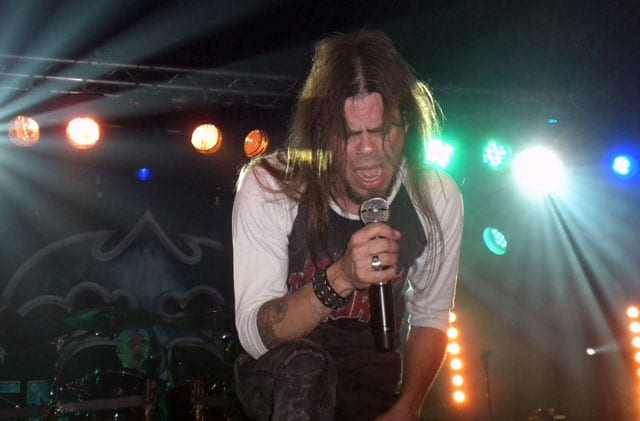 The atmosphere in Eindhoven feels even better. The modern facilities of De Effenaar offer a more spacious stage and can accommodate an even bigger audience. Beyond The Black leave us with the best of the impressions as the previous night, while Armored Saint being led by Bush and Vera manage to enchant people with their distinctive music skills.  If my memory serves me right, their set list bears no changes as from the previous night.

Despite the fact that La Torre’s health condition has not improved, his exceptional performance on songs such as “The Whisper”, “NM 156” and many more, gives us Goosebumps and keeps these music’s relics alive as ever before. There has been a change to the set list as “Warning” and “Empire” have been replaced by “X2”, “Where Dreams Go To Die” and Take Hold Of The Flame”.  Once again, although the duration of the band’s performance did not exceed the 65 minutes, there was nothing negative to be said since the outcome almost reached perfection!

The beginning of the day was not ideal. We wake up to be confronted by heavy rain and to make matters worse we missed our flight to London through which we were going to get to Bristol, our next stop.
It cost us a few…. pennies and a 4 hour delay and as a result, we missed the performance of Dendera.  A few minutes after our late arrival at the average, I dare say, club, Death Angel came onto the stage. I was extremely impressed by their energy and their excellent playing skills. An evident characteristic of their performance was the bond they succeeded to create with the audience, who gave them a loud applause in return.

The Marble Factory was not the ideal setting for Queensrÿche. An old storage space with a small, wooden, worn out and badly-lit stage which restrained them from moving around freely. No band deserves such a setting, let alone Queenÿsrche, an acknowledged band with over than 30.000.000 sales. Nevertheless, despite the unsuitable location, great bands just know how to shine! Queensrÿche don’t bother about stages and it is not the first time they have proven it. There have been two changes to the songs that were presented with the addition of “Queen Of The Reich” being the most distinctive.

Set list: Anarchy X, Nightrider, Breaking The Silence, Walk In The Shadows, The Whisper, En Force, Warning, double guitar solo, The Needle Lies, NM 156, Arrow Of Time, Eyes Of A Stranger, Queen Of The Reich, Take Hold Of The Flame. 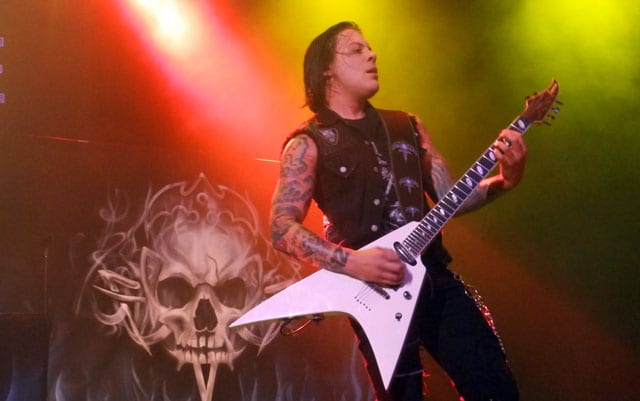 We always meet friends in London… We came across a few of them in the queue at the entrance of Electric Ballroom in Camden.  The atmosphere in London was quite familiar to us anyway. Death Angel open the night in the same dynamic manner and this time under better conditions than in Bristol. Armored Saint followed up with the same incredible approach and John Bush seems that can’t quit his old habits as he climbs up the pillars of the stage. It is another magnificent performance of one of the most legendary metal bands ever.

Todd La Torre is feeling much better today. He told us himself that morning when we met him at the back of the club. So, not only did Queenÿsrche’s performance reach the 80 minute mark, but they also worked miracles and gave us a show which was better than any other so far. It was an intoxicating performance with new additions to the set list like “Silent Lucidity”. The “battle” between Michael Wilton and Parker Lundgren on a double guitar solo, mainly approaching music themes of Queensrÿche’s hits which were not played live on this tour, was one of the highlights of the night. Last but not least, the young man with the Joker Batman smile is a key feature for the band having made great progress and having shown maturity as a musician. 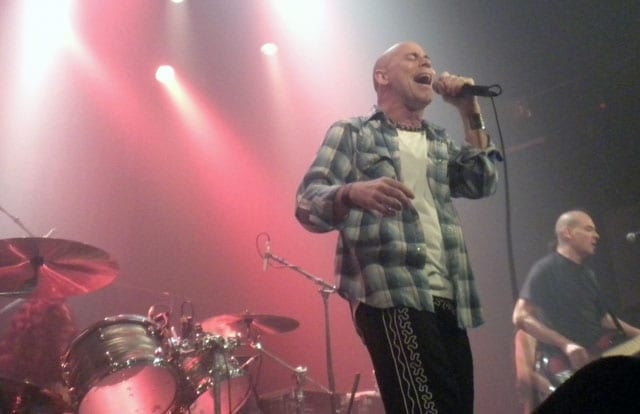 Our next stop is Concorde 2, which is located at the beach of Brighton. Way before the concert, around 13.00, we had the chance to catch up with Michael Wilton who was invited by a local music store.  Throughout this advertising campaign supported by ESP, he welcomed and talked to the people who swarmed the place in order to meet him.

Later that evening we saw Dendera as an opening act. To be brutally honest, apart from a clichéd kind of metal, a few grains of progressive and an average performance, I have nothing else to report.  On the other hand, Death Angel delivered once again the pure thrash metal that they only know how to play and at the same time they created an ecstatic atmosphere among the audience who went crazy.

Queensrÿche played their cards right on a small stage again and thoroughly justified the reasons why they have been on an ascending direction for the last past years. Powerful performance, ‘spot on’ music deliverance and distinctive playing techniques were the characteristics of their successful appearance. The addition of the day was “The Lady Wore Black”.

Set list: Anarchy X, Nightrider, Breaking The Silence, Walk In The Shadows, The Whisper, En Force, Warning, The Lady Wore Black, X2, Where Dreams Go To Die, double guitar solo, The Needle Lies, NM 156, Arrow Of Time, Eyes Of A Stranger,  Queen Of The Reich, Take Hold Of The Flame. 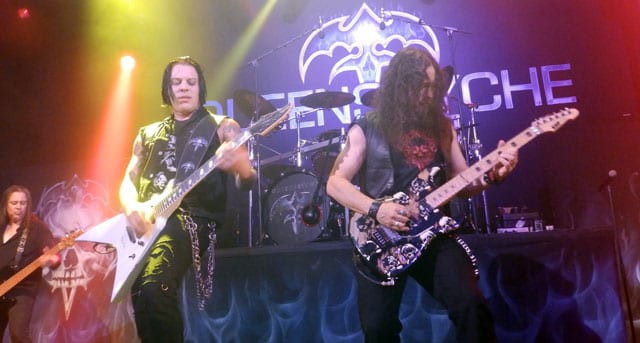 What a great line up on the first day of the festival! Having approached almost 10’000 people and looking at an extraordinary stage, things truly seemed ideal. The truth is that despite my personal preference, I still consider that Queenÿsrche were treated unfairly as far as lineup is concerned. I still cannot figure out why they were asked to play before Overkill, and even before W.A.S.P., with all the respect I have for both bands. In any case, despite the boiling hot sun at 13.45, Queenÿsrche, as well as the other bands, played on a stage that they deserved. It is undeniable that a well-constructed stage contributes to a better performance. On this stage and for 45 minutes, the band proved its exquisite character walking up and down, transmitting unique feeling to the audience and finally getting a well-deserved applause.  These are the stages where Queenÿsrche as well as other bands of the similar grandeur should be playing.

Set list: Anarchy X, Nightrider, Breaking The Silence, The Whisper, En Force, The Needle Lies, NM 156, Arrow Of Time, Eyes Of A Stranger, Queen Of The Reich, Take Hold Of The Flame.

Queensrÿche’s European Tour 2015 has come to its end. The performances of the band as well as the sample of their new work “Arrow Of Time” leave us with the promise of a magnificent outcome. According to Michael Wilton 3 years ago, Queensrÿche have redefined themselves ….and they are ready for some great stuff!

Just before I put the full stop to this account I would like to thank some people whose help has been invaluable in my effort to share this great experience with you. Rita, Art, Frank…thank you ever so much and I hope to see you all really soon.