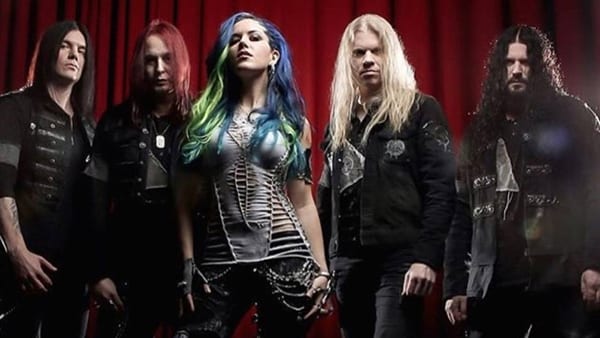 Arch Enemy’s guitarist, Michael Amott, talked with Malcome Dome about the lack of song writing from Jeff Loomis, their chemistry, as well as about a special guest in the new album, “Will To Power” which is out on September 5th through Century Media. “(Loomis) is a strong songwriter, but not in the style of Arch Enemy, I feel. He’s always writing and recording with his own stuff. He has a project called Conquering Dystopia, he has his solo stuff, [and] he obviously wrote most of the Nevermore stuff. I’ve always respected him, and continue to respect him, as a guitar player — he’s amazing and an amazing human being; he fits in perfectly. [There’s] a great chemistry [between us]. But, you know, I’ve always written most of the music, so it’s difficult to… I don’t really wanna change the sound of the band too much. The band sort of started around my songwriting and my ideas, and those continue to be the most dominant ones, I guess. But, you know, who knows [what can happen] in the future?” says Amott. He aslo talked about how their bothe styles in guitar blend: “his style is very different to our previous guitar players — my brother or whoever else was playing with us. But we have very constrasting styles, which is great. And he can play a lot of stuff on the guitar that I can’t play, and I can play stuff that he can’t play, so we just have that great… But when we lock together in the harmonies an the motifs, I think it’s very strong. He’s got a lot of classic metal as well inside of him. I think he’s just been working in a different field for a very long time, he’s not really… But he started off, obviously, with the same kind of roots that… We have a lot of common ground.” Finally, he revelaed the contribution of a special guest in the new album, keyboardist Jens Johansson: “I met him in a hotel bar in Tokyo. We started talking, and I said, ‘I’m in this band Arch Enemy.’ And he stopped [and said], ‘That’s one of my favorite bands.’ I was, like, ‘Really? Okay. Great. You’re playing on our next album. How much money do you want to play on our album?’ And he said, ‘How much do I have to pay you to play on your album?’ He really wanted to do it. So, a year later, I sent him a song. I said, ‘Can you come up with something for this?’ And he did. So that was great. He’s on two songs, I think. He plays some great, very classical-inspired stuff on ‘Dreams Of Retribution’ with the harpsichord. It’s got that real almost neoclassical feel. It’s great. It’s a fun addition to the band.”