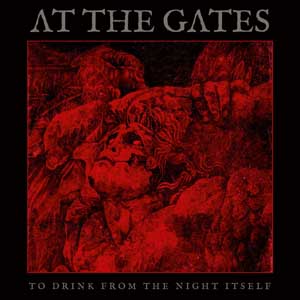 At The Gates need no introduction. From the pioneers of melodic death metal, the continue after their long-waited reunion to show how necessary they are in this music. Their excellent comeback with “At War With Reality” was just the (new) beginning.

Many were skeptical about what they would present to us, considering the fact that the iconic guitarist, composer and co-founder Ander Bjorler decided to quit the band (following his departure from The Haunted some years back). Anders decided to leave the metal scene completely, as he didn’t have anymore the flame and passion for it. However, looking at The Haunted who weren’t affected by this, but they kick ass even harder than before, and thinking that his twin brother Jonas Bjorler was always a key member to the songwriting, these concerns should have gone away.

The self-titled track from the beginning washes away any doubts and as the music continues you can find something amazing in it. At The Gates created another beast, but a bit different than the previous one. Less in-your-face and more experimental in some parts, shows the desire of the band to grow and evolve. Not that there are radical changes in their music, but they clearly didn’t want to make this album a copy/paste of the previous one. Great songs like “Palace Of Lepers”, “Daggers Of Black Haze”, “In Nameless Sleep” (with And LaRocque as a guest), “Seas Of Salvation” and “In Death They Shall Burn” compose another excellent album in their history.

As for the musicians, what more can you say? Tomas Lindberg, Adrian Erlandsson, Jonas Bjorler, Martin Larsson and the newcomer Jonas Stalhammar (God Macabre, Crippled Black Phoenix, The Lurking Fear) have a long history by participating in many great bands and albums, so their quality in undoubtful. Also, the production of Russ Russel is exceptional, as it makes the album sound exactly as it should.

At The Gates know their history and manage to release an album worthy of their name and justify their decision to reform (firstly) and record new material (afterwards). One of the top releases of this year? Maybe it’s too early to tell, but very possible.