Barb Wire Dolls is a role model for every new band. They left their country selling everything they had to buy their plane tickets to the USA. And they did it besides the difficulties. Just before their incredible performance in Athens I have a talk with their twice as incredible singer! Isis Queen doesn’t mince her words. She’s interested in living her dream ignoring what is going on in the rest of the world. She screams “live”, “chase”, “catch” and speaks with directness always using “you”. Interview: Dimitris Kazantzis

Rockpages.gr: How can you go round with such a name? 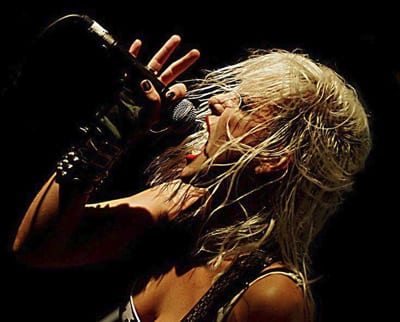 Isis Queen: This is my name. Even if I change it now doesn’t mean that I’m better than all those who are part of this terrorism. So I’ll stand by my name, I’ll keep it and will never change it.

Rockpages.gr: Tell me a few things about your latest tour in the US. How did it go?

Isis queen: Very well! We played in big festivals, we played everywhere in the US for 2 months…  It went just fine; we met a lot of people, even the guys from Eagles Of Death Metal. Finally, we went to their guitarist’s studio and recorded a new album after all this tour.

Rockpages.gr: Really, how are the guys from Eagles Of Death Metal after what happened in Paris?

Isis Queen: They are not happy that’s for sure…. They just do what they believe they should do because they feel they have to give something back to the people that were in their concert and to their families as well… What happened is such a pity really… but it’s not only Paris. These things happen all over the world. It’s a shame and we have to stand up as a nation and to understand that these things must stop. What happened in Paris will happen here as well, either it is by the ISIS or by something else.

Rockpages.gr: You told me before that you recorded a new album. How similar or how different is it to your previous albums?

Isis Queen: I don’t see any difference, but someone outside the group may hear something different. What we recorded in the Joshua Tree Studio, Dave Catching’s studio  (the guitarist of Eagles Of Death Metal), has  a more calming sound we may say, it’s not like the sound of Steve Albini ( producer of “Slit”, the band’s previous album in 2012) it’s completely different.

Isis Queen:  Not at all.  I know nothing about mainstream. A good song is always a good song. Whether it is mainstream or we sound like the Foo Fighters or U2, I have no idea. The fact is that the music has its melody. Our next records won’t be like our first one or even the second one. We’ll keep on writing songs and we’ll think about how we sound like or which is going to be our style.

Rockpages.gr: When you left Greece for the biggest market in the world, the USA, how sure were you that you made the right decision?

Isis Queen: We didn’t think about it. It was an opportunity and we grabbed it. We didn’t have any money to chase it, not even the dream. I had never thought about leaving Greece to go to America, it was just that chance. It was there, right in front of us, and we had to pounce at it because that’s what we are living for… taking chances! Otherwise it’s not worth doing what we do.

Rockpages.gr: Tell me about your first days there…

Isis Queen: It was very hard, I didn’t like America. There are too many laws, too many regulations everywhere, we didn’t know anyone, you can’t go anywhere without a car, you can’t walk, you must drive if you want to go somewhere especially in California. We were given the chance by someone we knew, not personally, only from MySpace. He offered us his couch to sleep on and to do whatever we could to find a concert to play. We had the dream but we didn’t know how to make it come true.

Rockpages.gr: What preparations are needed for something like that?

Isis Queen: People are leaving Greece all the time, it’s like a war! When someone leaves their country to go to work somewhere else, it doesn’t matter whether it is in England, America or anywhere else. We did the same thing for our music. It’s just that you have to work and to find people but you have to work for your music. You mustn’t think that you have to work to have money to play your music because in that way you will never play your music. The only thing you will have in mind is money. If you go with your dream and love, to do what you want to do as an artist for your art, you will find a way; you will find your way. Don’t make any decisions on anything if you are intimidated. You must do everything out of need, of love, and willingness. That’s what we did and we found our way.

Rockpages.gr: Your music is both exciting and provocative. Do you think there is a place for it in the Greek “systemic” media?

Isis Queen: I don’t know, but I believe that what we do is a real expression and challenges everyone because we feel what someone else might be feeling. We are no different, we are all the same. We have the same needs, now we have our own way to express them but we are no different. What we express is real, we don’t do anything for publicity and we live for what we express. 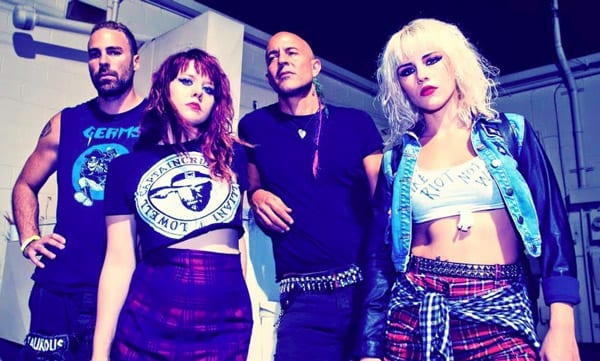 Rockpages.gr: Could the existing situation in Greece be a source for your inspiration? It is starting to seem like England in the late 70’s with all these social problems, when Sex Pistols were born for example…

Isis Queen: I think what Greece is going through is really good. I don’t know about politics… you can talk about it for hours, but I believe that real art will come from those who feel the need to express themselves. Before the crisis there was a kind of expression but it wasn’t real. It was like they were all taught by a school and not like they needed to express themselves for something different, something that will change the world. Now, I think that Greece is ready for a big change and this will come from art.

Rockpages.gr: Do you think that what our country is going through is something like an experience?

Isis Queen: Yes, of course it is an experience. But, I personally see all the things in a positive way. You can see them in a negative way as well, a lot of people do that but in that way nothing good will come out of it. We must have a positive attitude towards things, I know it’s difficult. We didn’t even have the money to buy our tickets to America but that didn’t stop us. We sold our cars, our instruments, amplifiers, everything we had and left.  If you really want something and you’ve got it inside you, don’t be scared because nothing will happen. Life is here to live it, you shouldn’t care about what happens around you because everything will go on happening whether you live or not. You must follow your dream whatever it is. Otherwise there’s no point working for thirty Euros a day and not having a dream to live. Then stop living…. ha ha ha!!!

Rockpages.gr:   What’s typical of your live performances is the excellent performing. How important do you think performing is in music and generally in stage performance?

Isis Queen: We all express ourselves in a different way. Our music is our way of expressing ourselves. This is a kind of dancing, dancing along with music. What we do is exactly that, the combination of both of these.

Rockpages.gr: What are the future plans of Barb Wire Dolls when this mini tour in Greece finishes?

Isis Queen: We’ll have a rest for a while, write new music. Our agent has booked a tour for us In America in March; we have a new manager now. He is the manager of Motӧrhead and Anthrax so things are going to change from now on. 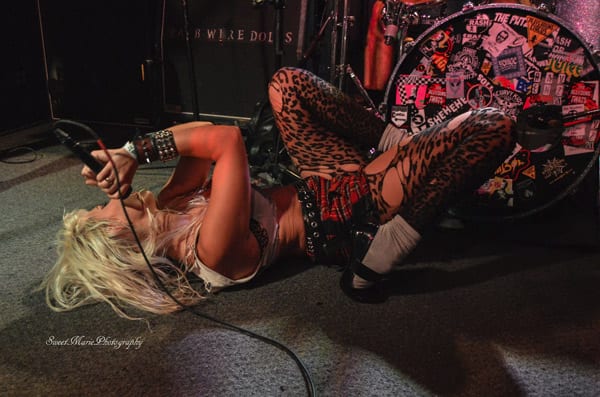