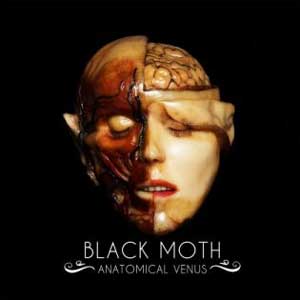 It is a fact that doom metal has known glories over the past decade and even more so with female fronted bands.

Reasonably enough, many releases do not originate, others just repeat the 70’s, but fortunately, there are still many good ones that keep the level and the interest of fans high! Black Moth’s “Anatomical Venus” does not belong to any of the above categories. Their third album is the one that will make them widely known and not only. “Anatomical Venus” is the album that takes Doom by the hand to lead it into new paths. And albums of this category are now very rare.

The Leeds quintet with captain Harriet Hyde hardens its sound, while at the same time they have written their most melodic songs ever. Grafting their sound with L7 and Nirvana, pressing on the solid base of Sabbath (like in their two previous albums) reaches its climax. Importantly, we do not have any imitation of Ozzy’s vocals and the band does not turn back to the 70’s and 60’s. “Istra” is an ideal opening, which inspires with its outbursts and defines the style and consistency of the album. The playful riff of “Moonbow” that follows is 90’s grunge and will eventually lead to a top stoner chorus. Each song has this something that stands out and we do not have the space to describe everything.

Until “Pig men” (do not forget that except for Harriet there is a female guitar player), the album is exciting and innovative. Changes, closures, drumming, but mostly the riffs and the vocals of Harriet, are all unreal.

Album of the year? It is too early. However be sure to listen to it.