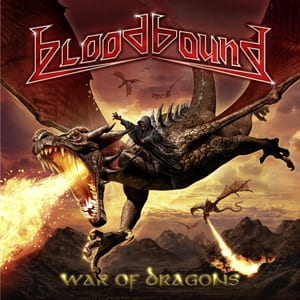 The Swedish power-metallers have a constant presence since “Nosferatu” of 2005, by releasing an album at approximately every two years. This time their new album follows “Stormborn” (based on “Game of Thrones”) of 2014 and the live release “One night of blood” (2016) .The theme is Dragons (and swords, gates, battles, you know …), and following is what I heard and what some of the songs on the album reminded me of:

“Battle in the sky” – Stratovarius and Rhapsody of fire.

“Silver Wings” – Celtic “White Masque” of Running Wild (from the heroic “Blazon Stone”, when they plowed the seas).

“Dragons are forever” – Hansen-School to the bone and a great song.

What makes them stand out in the year 2017? What can they offer to a subgenre that it has been many years since it flourished? The most important is respect to the listener with a very good production, but what really spoke to my heart and I claim to be the basis of European power, is the optimism, the cheerfulness and the vitality that came out from the album.

Those who do not listen to power metal have already stopped reading (good for you), those who listen, check them out. It might not change the history of the genre, but “War of dragons” is so fun and uplifting that it will be hard for you to resist to repeated hearings.