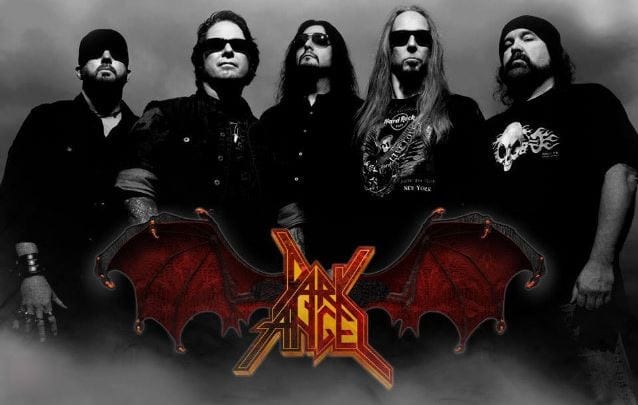 Reactivated California thrash metal pioneers DARK ANGEL are continuing to write material for their long-awaited comeback album. The band’s first CD since 1991’s “Time Does Not Heal” will feature the lineup that has performed sporadic live shows since reuniting in 2013: Gene Hoglan (drums), Eric Meyer (guitar), Jim Durkin (guitar), Ron Rinehart (vocals) and Michael Gonzalez (bass).
In a brand new interview with KNAC.COM, Hoglan stated about how the new DARK ANGEL disc is shaping up: “We started writing this new album, Jim Durkin and myself, in 2014. It was kind of an open year for me, there wasn’t a lot of TESTAMENT stuff, there was a little bit of DEATH TO ALL going on and it gave me time to do a lot of DARK ANGEL stuff that year. Originally, we just threw it out: ‘Let’s get back together. We’ve got offers to get back together and play some shows and, hey, maybe we can write a little music, see how that goes.’ And the shows were super amazing, super successful.”
Hoglan added: “We’ve already got five or six songs ready to go and they’re killer. The stuff Jim’s writing is deadly. And I’m trying to carry forth the youthful energy and aggression of ‘Darkness Descends’ with a little bit of what we were doing with ‘Time Does Not Heal’ and some cool-ass ‘Leave Scars’ thrown in. It sounds like DARK ANGEL, but I’m trying to err on the side of hyper-aggression, and that’s cool with me. You never go wrong going heavier. So write a shit-ass heavy fucking record, that’s gold in my book.”