Six years afte the release of their debut album Darkology are back with “Fated To Burn” and Michael Harris justifying that delay, talking about the album’s songs, their collaboration with Chris Tsangarides, his influences, the band and Eastern scales in heavy metal. Interview: Yiannis Dolas

Rockpages.gr: The obvious question is why there was so much delay between your debut album and “Fated To Burn”? 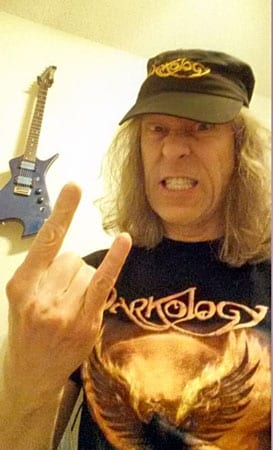 Michael Harris: We actually had “Fated” written about 3 years ago and it had been in our label’s hands since then. We have also all been involved in other musical projects, so it sure didn’t seem like 6 years!

Rockpages.gr: You worked with Chris Tsangarides for the mixing of the album, how did that come up and how would you evaluate his contribution?

Michael Harris: Chris was secured by our label, Prime Eon Media, and we loved his work. He nailed that old school metal vibe with the right amount of crunch, ambience, vocal effects, and dynamics, and didn’t overcompress and suck the life out of our record like a lot of modern metal.

Rockpages.gr: Both albums so far nod to old(er) school American power metal, is that where your influences take you?

Michael Harris: Not so much power metal, which is largely 16th note double kick, but progressive metal, as we use a lot of odd time signatures, syncopated beats, dissonant chords, and acoustic passages as well as the double kick stuff. 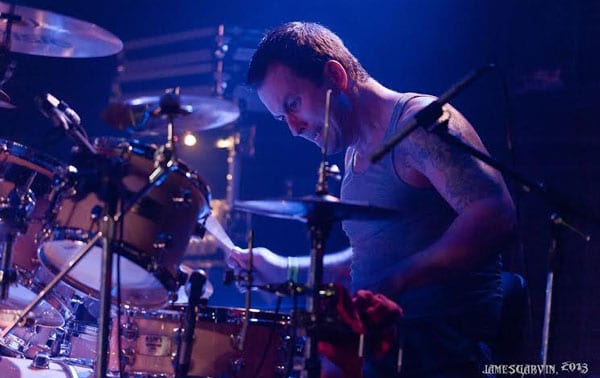 Rockpages.gr: The album contains a 9-minute epic “Nightmare King” could you tell us a few things about it? What’s the story and how did you come up with that concept?

Michael Harris: Musically, we wanted to end the record with an epic like “Trance of the Gorgons” from the first record, which had a semi-acoustic chorus. “Nightmare” has an even lighter and creepier acoustic chorus that I really dig. Mike wrote the lyrics, based on a short story he wrote called The Dream Hunter Chronicles. In the song, the dream hunter steals and kills in the dreams of his victims. But unbeknownst to him, the Nightmare King lies in waiting for him. 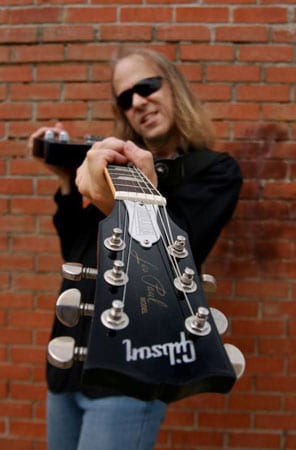 Rockpages.gr: “Quantum Genocide” hits very hard and I think it’s one of the heaviest Darkology songs. How did you come up with that?

Michael Harris: Thanks man. The main “Quantum” riff was one I’d had hanging around for years. I loved the unique groove, so I knew I would use it eventually. Mike mentioned that he had some lyrics about the Higgs Boson with the “QG” title, which I kept pushing him to use. Although the core of “QG” is actually simple, it gets pretty technical in the middle, and even features a blast beat from my brother. So Mike’s lyrics & this music fit well together. And you’ve heard Kelly’s amazing vocals on the tune as well.

Rockpages.gr: “Holy” made me think of Iron Maiden’s “Powerslave” there’s something eastern into it. How difficult is it to filter your influences, create your own style and your own musical identity, especially in metal where copying others is something pretty often?

Michael Harris: I think in the last couple of decades, it’s been difficult for any metal band to be truly original, because everything had already been done 1000x in the 70s/80s. Even when Maiden came out, I immediately heard the Sabbath, Deep Purple, and Priest influences. And the eastern feel had already been done quite a bit in the 70s, using either harmonic minor, Phrygian, or Phrygian dominant scales. Such as “The Sails of Charon” (Uli Roth/Scorpions ‘76), “Requiem For a Sinner” (Mahogany Rush ‘77), “Earthquake” (Uli Roth ’78); “Gates of Babylon” (Rainbow ‘78); “Egyptian Danza” (Al DiMeola ‘78). Also, Maiden exploited the galloping rhythm, but it had already been done to death way before they were around, starting with Deep Purple “Hard Lovin’ Man” in 1970 or Sabbath “Children of the Grave” in ’71 and then by every metal band in existence. So we weren’t trying to change the world with “Holy” (ha), but it did break up the album nicely to have an eastern feel song on it. My favorite musical part on the tune is the opening riff when Mike & Brian kick in. Sundown wrote these lyrics btw, about the how religion has been used to subjugate the masses throughout history. And unlike a lot of metal vocalists, he actually can sing in an eastern mode, so the lyrics, music, and vocal melodies all fit well in “Holy”.

Rockpages.gr: How do you write your music and make your songs? I think that Michael writes the music and the lyrics as well. Is there room for suggestions from the others?

Michael Harris: Mike, Sundown, and Brian all have great instincts for metal and absolutely crushed on this record. Yes, I usually write both the music & lyrics, but this time most of the lyrics were written bassist Mike Neal, and some by Sundown as well.

Rockpages.gr: Kelly is a great asset for the band with his impressive vocals and performance, but you have to replace him recently to play some shows. How did that feel, where you nervous about the whole situation?

Michael Harris: Agreed on Kelly being one of the best metal vocalists around today. And yes, I had concerns when he disclosed that he could not do the tour, but upon hearing the vocalist that was secured by our label, Eugent Bushpepa, I was confident he could respect Kelly’s vocal style and get the job done well, which he did, as did Mike Dorado & J.T. Longoria on drums & bass.

Rockpages.gr: Why did you decide to make a music video for “Kill Me If You Can”, and what you can tell us about the making of it?

Michael Harris: We felt we needed a video because there has been very little “visual” on the band. I believe it was our label that chose  “KMIYC”, for which we each shot our own separate footage, and the video was then directed by Tassos Kapsanis and edited by Evangelos Moliviatis.

Michael Harris: To promote “Fated to Burn” the best we can and to finish our 2nd video for the title track while hoping for live performance opportunities.

Rockpages.gr: What would be the ideal scenario for Darkology’s future? 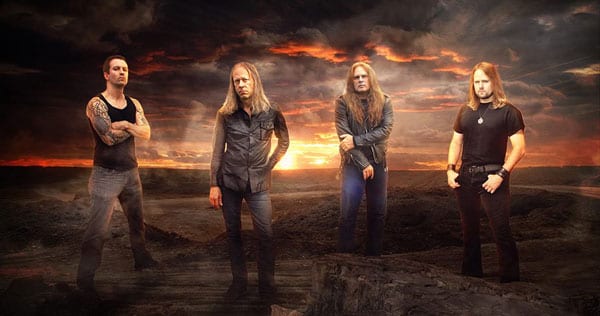