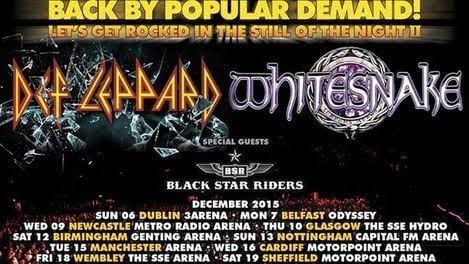 Def Leppard embarked on a mini UK tour with Whitesnake and Black Star Riders and we decided to make the trip up to the beautiful city of Dublin for the opening show.

After the interview that we did with Vivian Campbell (coming up here at Rockpages) and our meeting with Joe Elliott, we headed towards our seats of the 3Arena having already grabbed the necessary stuff (t’ shirt, tourbook, Murphy’s beer). 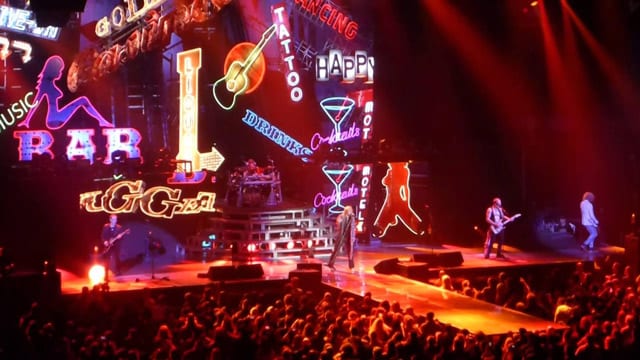 I knew more or less what I’d expect from Black Star Riders as I had seen them live in March in Cambridge. This band is excellent but I have to be honest I expected a far warmer welcome from the Irish crowd given the connection that Thin Lizzy has with Dublin. Naturally there was a warm reaction towards the Thin Lizzy classics (especially “Whiskey In The Jar”, “Jailbreak”, “The Boys Are Back In Town”) and the overall Black Star Riders was pretty good. I must point down that the band couldn’t almost play as Jimmy De Grasso revealed to us when we met him earlier due to the fact that a wild storm hit the western coast of Ireland thus cancelling many flights. We were there and the winds were fiercely blowing a day before the show but everything’s was calm 24 hours later…go figure!

Whitesnake had absolutely no problem winning over the crowd as they based their set list with the timeless hits (cued from their rich back catalogue and the brand new “The Purple Album”). Even Coverdale’s voice was in excellent form (maybe the fact that it was the tour’s first show had a lot to do with this) and the aid by all the Snake members was immeasurable. This must be one of the best line-ups of the entire Whitesnake career. Beach and Hoekstra is the ideal guitar duo on stage while Aldridge and Devin provide the ideal rhythm section for all the Whitesnake anthems. I must underline something here…I hear lots of people complaining all the time about Coverdale’s voice. Yes, it’s not the same as it used to be…agreed. But in very few years, we won’t be able to listen to this incredible performer. So, let’s enjoy the moment! All in all, it was an excellent Whitesnake show! 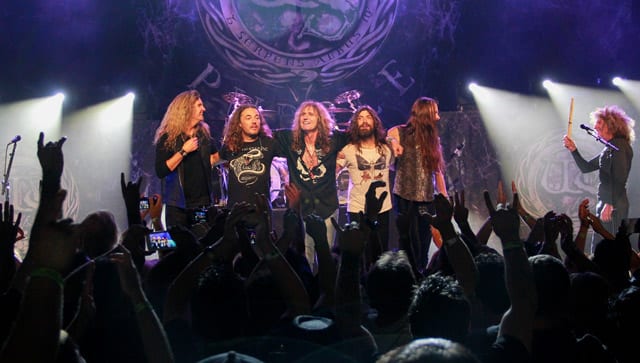 You didn’t have to be the most sharp observer to realize that the vast majority of the Dublin crowd was there for Def Leppard. A couple of minutes after 21:30, the huge curtain with the classic Def Leppard logo goes up revealing an impressive stage while the first notes of “Let’s Go” rushed through the speakers of 3Arena. It was evident that the band was on top of their game (as always), well-rehearsed up to the last detail and the sound was unbelievably crystal clear! As a matter of fact, you were under the impression that Mutt Lange was somewhere behind the console handling the knobs! “Animal”, “Undefeated” and “Dangerous” followed and as you will see at the very end of this review the set was heavily based on Def Leppard’s masterpiece “Hysteria”. 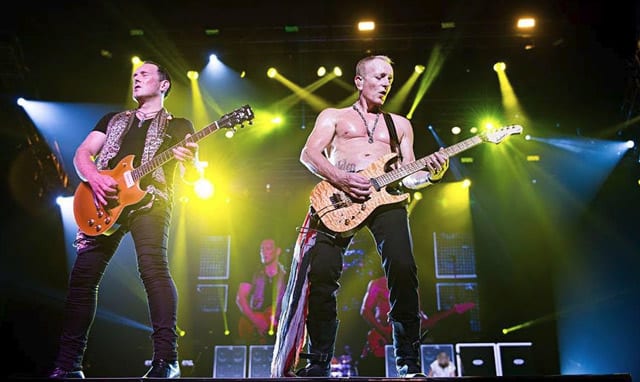 The backing vocals were awesome giving you constantly chills down your spine, Collen and Campbell reproduced faithfully all the guitar parts of what someone hears on the studio versions, Allen was impressive with a permanent smile on his face and Elliott’s voice and overall performance were flawless. For this writer, the live versions of “Switch 625” and “Hysteria” with all the photos of that era on the background huge screen were more than touching as they brought back memories of a long past but certainly not forgotten era. 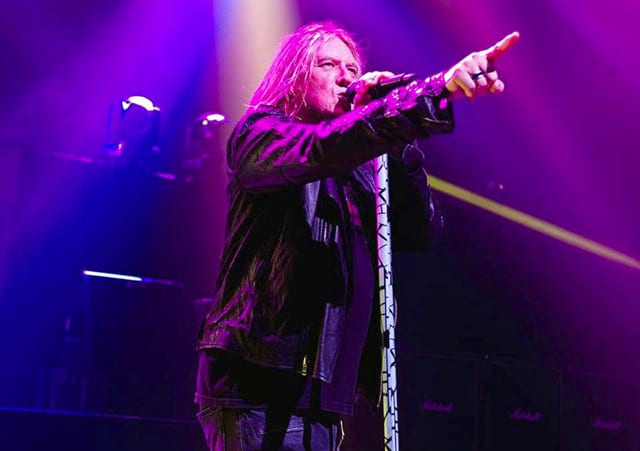 As a closing note, I must say that it’s really a shame for every single opening act for a Def Leppard show as the Sheffield boys put on an unsurpassable show thus making it almost impossible for everyone even to catch up with them (let alone compare with)! 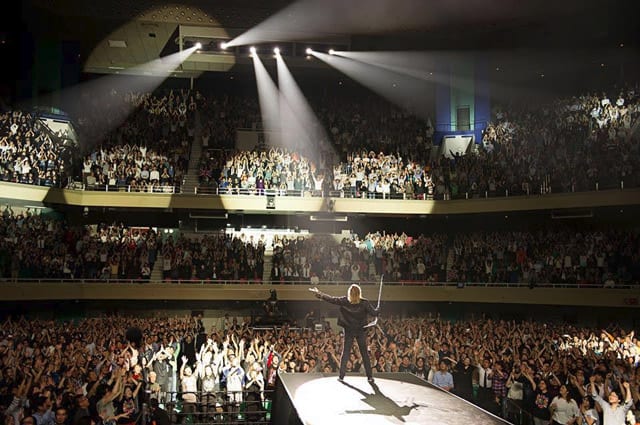