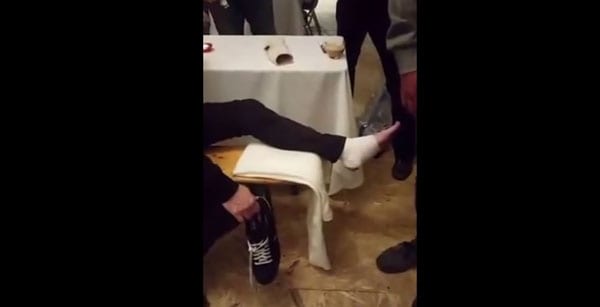 Megadeth were forced to cancel their performance at Rockmaraton festival in Hungary yesterday, because of Dave Ellefson breaking his leg. Dave Mustaine explained on a video he uploaded on Periscope: “So we’re here backstage and David Ellefson was walking across the ground and fell and broke his foot. So we’re going to be a little bit late going on tonight. Just want to warn you guys just pray hard right now that he’ll heal.” Despite the injury the bassist was in a good mood taking selfies with the paramedics that rushed him to the nearest hospital. Finally, Mustaine decided to cancel their performance, although Ellefson was willing to play wearing a cast. However, Megadeth are expected to play as scheduled their two remaining shows of their tour in Slovakia and Czech Republic today and tomorrow, 16th and 17th of July respectively.