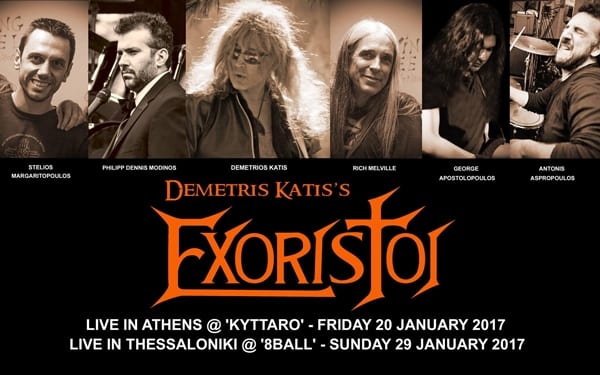 Two veterans of the Greek heavy metal scene joined forces for a night full of traditional epic sound! Approximately 200 people found their way onto Kyttaro Club that Friday night and the timeline of the schedule was kept almost intact…good thing!

Clairvoyant is one of those bands that might have not established a name in the elite of the local heavy metal scene yet every self-respected fan truly embraces their highly energetic performances. The band’s leader Vaggelis Keramidas was the undisputed frontman with a constant smile on his face and his guitar as his weapon of choice that night! Clairvoyant proved to be an ideal warm-up act and the crowd paid them back with a welcome round of applause throughout its short yet fulfilling set. The closing rendition of the classic “Lonely Lady” (Q5) was the icing to the cake and the foundational stone of yet another qualitative show by Clairvoyant.

Exoristoi don’t need any special introduction. They have 28 years under their belt and their self-titled debut is considered a classic, timeless piece of art. In the last few years they have resurrected their act and their shows are quite remarkable. I had the luck of catching them live quite some times and I must that I was eagerly awaiting this specific show at the Kyttaro Club. Let’s point down the positive aspects of their overall performance. First and foremost, the return of Antonis Aspropoulos behind the drums has given an unprecedented boost to the band as his drumming skills are extraordinary. He is a welcome addition to the rhythm section and he has gelled perfectly with bassist Rich Melville. The overall sound quality was pristine and the song selection pretty good. Demetris Katis was as always sensational and the band played flawlessly with the crow going wild (especially at the beginning when two smoke flares created an impressive atmosphere).

Let’s go the negative points…once again, the running order of the songs was not –at least from my perspective- ideal as all the so called hit sings from the debut were presented in the first half of the show. Filippos Modinos should definitely work something out in regards with the overall communication with the crowd. He was standing still without talking in between the songs and the intervals were many thus making Modinos’ input more crucial than ever.

All these may sound superficial but trust me they are absolutely necessary for a smooth live show. I sincerely hope that we will get to see more live shows by Exoristoi with this line-up.