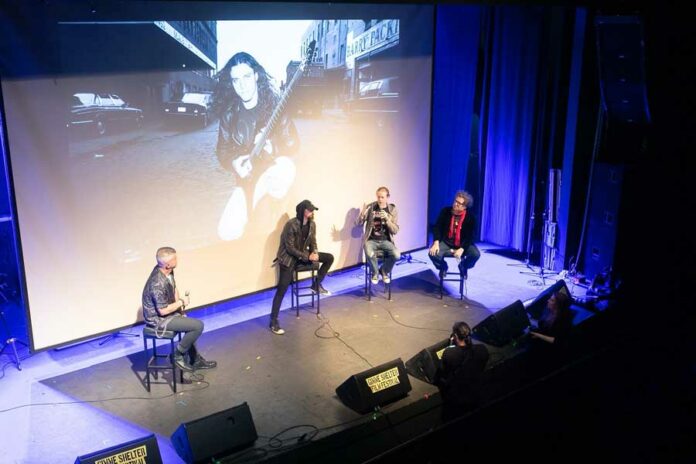 Surprisingly, I had never been to Gimme Shelter Film Festival before. But what I saw in my first attendance, it was extremely positive and I will definitely visit again in the future. The last night for this year was dedicated to a huge musician who changed the death metal sound (but also the extreme sound in general), Chuck Schuldiner.

The audience was warmed up by tech death metallers Blasteroid, who, as they have stated on our page, are heavily influenced by Death and this was reflected in their music. With very good technique they played five songs in the time they had, three of their own and of course two covers of Death, “Defensive Personalities” and “Suicide Machine”. They’re gearing up to release their first full-length (they’ve also got an EP out so far), so fans of the genre check them out.

Up next was a twenty-minute preview of the documentary about the amazing Nightfall which is expected to be ready next year and will be shown for the first time at this festival. From what little we’ve seen, it looks like a lot of good work has been done with footage from the band’s recent concerts as well as statements from musicians and editors. I look forward to the final result. Afterwards, the festival organizer was on stage coordinating an interesting discussion with Efthimis Karadimas, the director of the Nightfall documentary Antoine de Montremy and Akis Kapranos (ex-Septicflesh, ex-Order Of The Ebon Hand, ex-Chaostar).

The time had come for the main course. We first saw a short statement from Gus G. about Chuck as well a mini interview from Felipe Belalcazar, the director of the documentary. As for the movie, I have to say it was excellent. It describes the entire course of Death, from the first days as Mantas, to the creation of Control Denied and the death of Chuck. The narrative takes us from one year to another and from one album to the next. Editors and label executives analyze the band’s huge influence on the music scene while former members recount events and memories. Each Death album is represented by musicians who played there, as we see Chris Reifert, Rick Rozz, Terry Butler, Sean Reinert, Steve DiGiorgio, Gene Hoglan, Bobby Koelble, Shannon Hamm and Richard Christy. Also, important was the participation of Eric Greif (the band’s first manager), Jim Morris of the legendary Morrisound Studios as well as Chuck’s family with his mother Jane and his sister Beth. Of course, we also see him from archive footage.

What I really liked was that it’s not a movie to deify Chuck. All the members spoke freely about the difficulties they had with him, his strange behavior which led to tour cancellations and had damaged Death’s name mainly in Europe as well as the inelegant way in which he kicked some people out of the band. Of course, no one held a grudge against him for being fired, since they understood that they could no longer participate in his vision, but they were left with a bitterness for the way it was done. We also hear about how he perceived the subject of lyrics that deviated from the then classic extreme subject matter, how much he wanted to develop himself and the band as well as the period when he did not want to sing or be associated with the death metal scene, a fact that helped create Control Denied. His illness and death fortunately do not get much screen time and when it did, the great emotional state of those who were next to him and experienced it is evident.

In conclusion, Death By Metal is a film that every fan of extreme sound must see. An excellent attempt by Felipe Belalcazar to succinctly tell the story of the mighty Death. Big thumbs up to Gimme Shelter Film Festival for this special experience they want to offer fans of hard sound. Support it, it’s worth it.