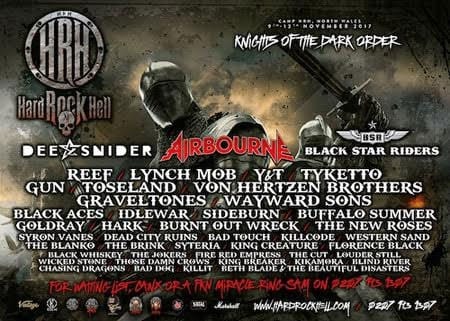 We’ve been absent from Hard Rock Hell Festival for over a year now. Business engagements have held us away from last year’s tenth, anniversary edition of Europe’s biggest indoor festival. 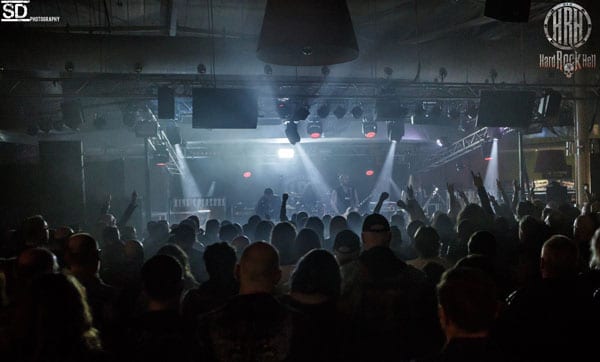 This year, the festival began with a significant innovation. The prize awards to bands and other agents of this event and of the music industry. Unfortunately we missed this happening along with the first warm up day of Hard Rock Hell mainly due to the “curse” of flights. According to some co-workers’ accounts Dee Snider’s performance on Thursday was powerful.

Very early on the small stage, Kingbreaker draw the attention, a very good and energetic band with a remarkable presence of the frontwoman whose makeup was really unusual. It was a very good warm up for what was about to follow…and it was surely very hot!! I must say here that this time the female presence in the festival was probably more intense than ever. (Let’s be patient until next March in Hammerfest with…Greek female presences).

Frontwomen go on, on the opposite big stage with Coldray and the impressive performance of their singer. Very good psycho rock which the audience really liked.
Syteria come next, Jackie Chamber’s of Schoolgirl new band. Three women and a drummer gave an exceptional show based on their first studio album, a set from which I singled out “Revolution” and “Stupid Girl” which were very good as well as the very good rendition of  legendary Ramones’ “Rockaway Beach”. 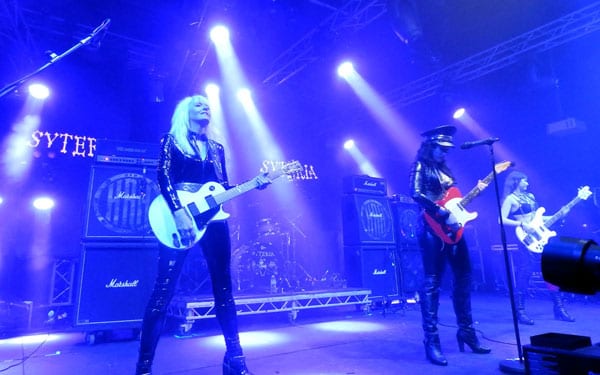 We missed Tyketo’s performance due to prior engagements in the press conference room but not the one of Y&T which was in my opinion by far the best performance of Hard Rock Hell XI.  Dave Meniketti doesn’t let time ruin him or the band. Faultless performance in any way even if “Midnight In Tokyo” was conspicuous absent. Meniketti   didn’t neglect to dedicate “Winds Of Change” to the three members of Y & T who have passed away and the audience didn’t stop applauding.
Setlist: Black Tiger, Straight Through The Heart, Dirty Girl, Mean Streak, Winds Of Change, Masters And Slaves, Hang’em  High , I Believe In You, Barroom Boogie, Squeeze, I’m Coming Home, Rescue Me , Forever 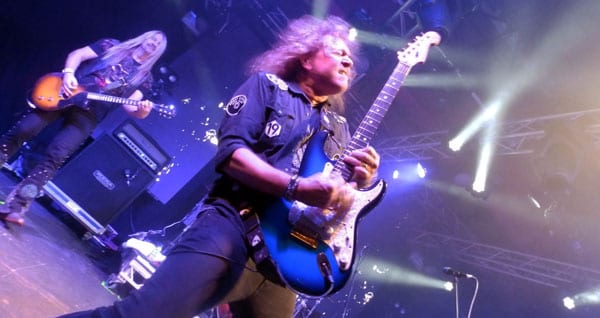 Airbourne closed the second day. We are going to talk about the Australians in detail in another column of Rockpages.gr. Here they gave rock and roll performance lessons with the charismatic Joel O’ Keeffe becoming one with the crowd.

Setlist: Ready To Rock, I’m Going To Hell For This, Too Much, Too Young, Too Fast, Down On You, Rivarly, Girls In Black, Bottom Of The Well, Breakin’ Outta Hell, Chewin’ The Fatlt’s All For Rock And Roll, Stand Up For Rock ‘n’ Roll, Live It Up, Raise The Flag, Runnin’ Wild 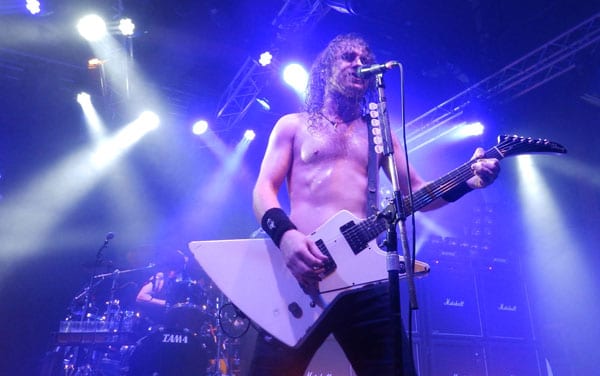 Next to the press conference room , on a special stage , Western Sand, one of the most promising bands In England, present a very interesting acoustic set and right afterwards they move onto the second stage for their main performance which didn’t rise up to the name they have started to create.  There is a lot of power and energy on the stage while their music has its own interest. 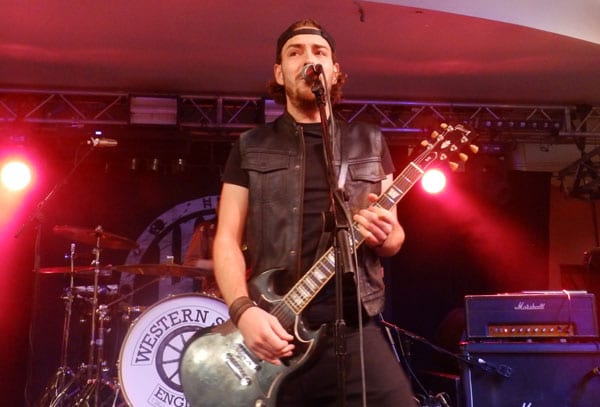 I believe that the time of Von Hertzen Brothers’ performance was totally wrong. The Finnish are already a strong name in their field (what is that….probably the wider progressive rock/metal I would say) and their performance was at least emphatic.  It is a great band with an imposing presence while their music is most demanding and they have a lot to offer to music.

On the contrary I consider Gun that followed, to be the disappointment of the festival. Nerveless, scentless and too little.  Nothing to do with the Gun I saw for the first time in Prestattyn in 2009 during Hard Rock Hell. At the same time on the opposite stage, Louder Still is much more interesting as their performance is full of energy and professionalism. A very good brand new band. 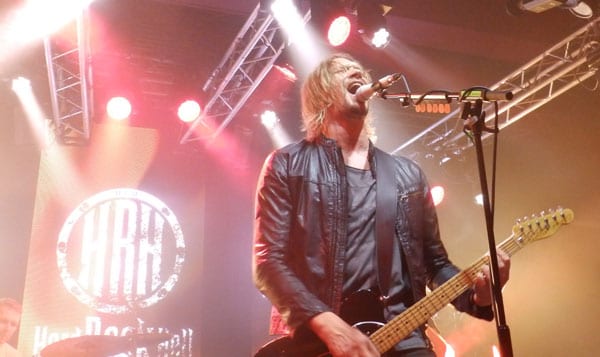 I had never seen Lynch Mob or George Lynch with any other band of his, (I would prefer with Dokken but…). With Oni Logan, Lynch Mob’s original singer, at composition the band was more than decent. It reminded of some times from the early 90’s with songs from the first albums and Lynch’s work with Dokken with “When Heaven Comes Down”, “Into The Fire” and “Mr. Scary”.

Setlist: She’s Evil But She’s Mine, River Of Love, Believers Of The Day, Main Offender, When Heaven Comes Down, Into The Fire, Testify, Sweet Sister Mercy, Mr. Scary, Wicked Sensation 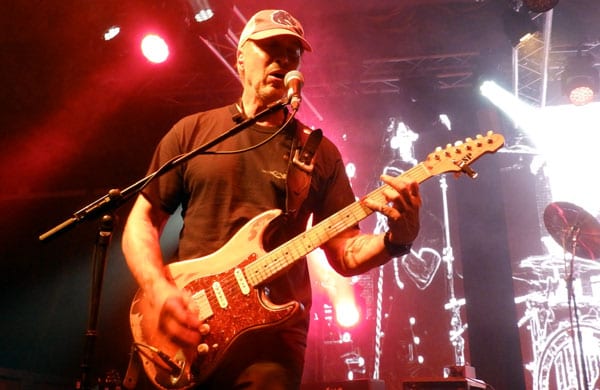 I was never impressed by doom stoner. Reef were just perfect for their audience who seemed to enjoy it a lot.  Regardless of personal preferences Reef seemed as a big and experienced band. 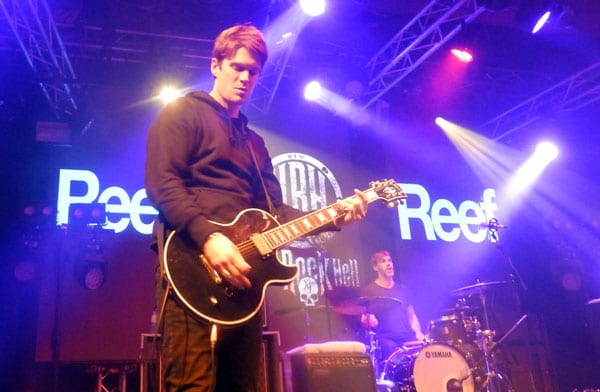 On the opposite, second stage, our new revelation is called King Creature, a contemporary metal band with an impressive performance, very professional and with very interesting music. Check them out!

The end of the festival has come. Black Star Riders is the finishing band. A band guarantee for their performances (and for their releases). They performed excellently with Gorham, Warwick and Johnson mainly and they managed to excite the audience with even just half… a movement of theirs. It was a great performance and an ideal closing for another Hard Rock Hell Festival from one of the most experienced rock bands of today.

Setlist: All Hell Breaks Loose, Finest Hour, Heavy Fire, Testify Or Say Goodbye, Soldierstown, Before The War, Dancing With The Wrong Girl, Hey Judas, When The Night Comes In, Cold War Love, Bloodshot, Jailbreak, Ticket To Rise, Blindsided, The Killer Instinct, Kingdom Of The Lost, Bound For Glory, Whisky In The Jar. 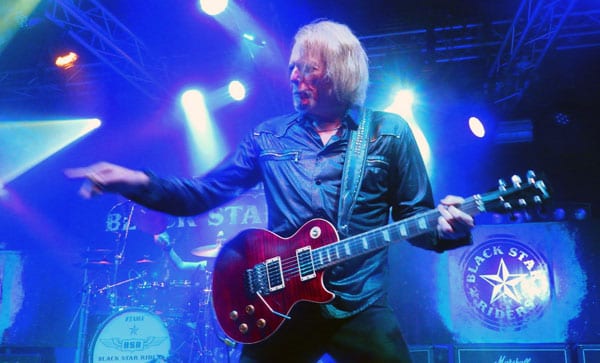 Before we close, many thanks to this wonderful production of the festival for everything that provided us for once more and see you again in November 2018 with Saxon and many other interesting bands.