On the other end of the telephone line there is a relatively new singer who comes from the great old British school, Nathan James from Inglorious, that previously released their debut. I loved the album for its pure ‘70s blues rock roots that are served in an aggressive and intense way. So, talking with Nathan was the next step to learn more about the band’s debut, his wildest dreams and ambitions. Interview: Yiannis Dolas

Rockpages.gr: So far you have received very good feedback, good reviews, even celebrity compliments, for example from Brian May. Does all this create pressure to you to live up to those 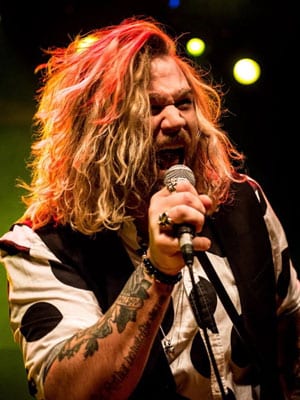 Nathan James: Ahm, no, not really. I think we are just happy that people are enjoying the album. it took us a lot of time to get out, we really worked hard… it just feels that all of our hard work was for a good reason!

Rockpages.gr: How would you say you managed to create such a strong album that is based on classic influences like Deep Purple and Whitesnake, but it’s solid and is not a copy?

Nathan James: I don’t know how we did really… it’s just that how we sound. We recorded the album live. If you put microphones in a room with us… that’s what is sounds like. I think we must have our own sound. Our bass player (Colin Parkinson) has a very unique sound… almost  like a Billy Sheehan kind of vibe. We have two guitarists and an organ. It’s a very unique sound. I am really pleased with people who say that it sounds modern, because I wouldn’t want people to say that we are a “retro” band…

Rockpages.gr: Nowadays there is this kind of movement with retro bands that copy the sound of the ‘70s, but if I was going to call you “retro” you wouldn’t fall into the same category as those bands…

Nathan James: We are not a retro band, definitely not! We just like to play and sing properly! So, maybe the playing is good, we have loud guitars, we recorded everything live… everything you hear is real! There is no “auto tune” or anything, so maybe that’s why it sounds a little bit ‘70s, but hey that’s when the music was the best and that’s why we were influenced by these bands… 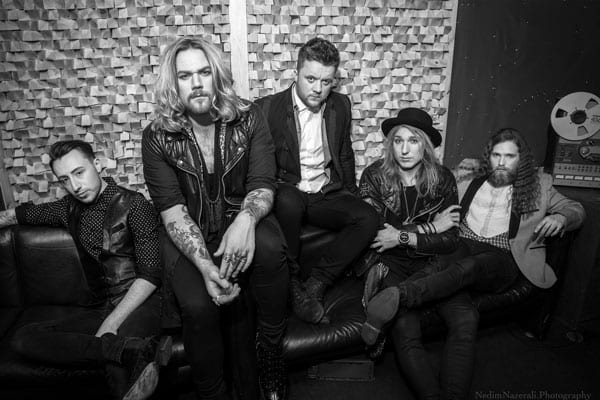 Rockpages.gr:  On the album you have fast rockers, like “Breakaway”, as well as slower stuff like “High Flying Gypsy”, which songs would you say it’s easier for you to write? The fast, or the slower ones?

Nathan James: For me, the slower ones are easier to write… I don’t know why, it’s probably because I like the groove and our band is very groovy. Our bass player and drummer (Phil Beaver) have been playing together for 17 years, so they are very groovy. So, I just find it very easy to write with those guys. When they lay a groove down it’s very easy to put the lyrics to it.

Rockpages.gr: You also wrote songs with Joel Hoekstra and Al Pitreli that are actually on the album. How was working with those guys?

Nathan James: It was fantastic! I know Joel since my time with Trans Siberian Orchestra in America. I wrote “You Are Mine” with Joel in a hotel room in Omaha, Nebraska and it was a really nice experience, we wrote the song really quick. He is a great writer and actually an incredible guitar player and it was lots of fun… me and Al wrote… well, Al gave us to riffs, “High Flying Gypsy” and “Girl Got Gun” and then we got to do two songs based on those riffs. Al gave me those riffs backstage in an arena… I think we were in Memphis and I recorded them on my phone and sent them to the boys and said: “hey, let’s make a song out of those two riffs”… and we did! And it was great! I am very happy with it.

Rockpages.gr: Also, I read somewhere that you have already wrote some material for your next album. Are you going for a quick follow up release, or are you going to wait?

Nathan James: We wanna wait… definitely. We want people to hear this album first. We wrote almost 30 songs for this album and then we recorded 22 songs and then we picked 11. There is another 11 songs that are ready, but we don’t want to put them all out. They weren’t right for this album because of the tempo… one of them was too slow, the rest… we just left this group of 11 songs that were working great together and that’s all we want to do for the next album. We want to write another 20 or 30 songs and then pick again… 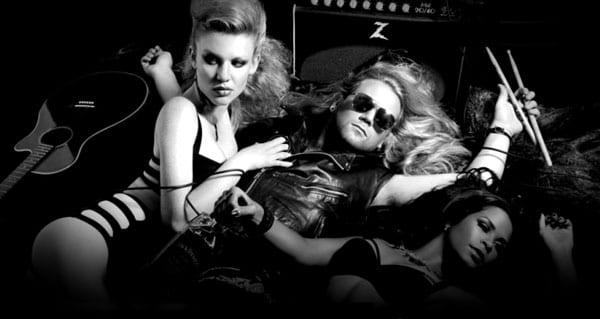 Rockpages.gr: When you are doing covers maybe someone might feel that you have some sort of “safety net”, since everybody in the audience should know the songs you chose to play, but when you are playing your own material how different is the feeling you get?

Nathan James: It’s amazing! I’ve sung for many years, I’ve played maybe more than 2,000 shows in my life. No feeling in the world is like performing your own material, especially with this group of people, the band, we all are like a big family, we are a big bunch of brothers, so it’s a very special feeling. Especially, when the audience is very receptive and go crazy and sing along to our stuff… it’s really great…

Rockpages.gr: I think you’ve played a few shows while you were releasing your album. What’s next for you guys? More shows, touring, summer festivals?

Nathan James: Yeah! More shows, more tours… get writing and also we got some nice festivals coming up, which is very cool, in the next year or so and then we’ll see. We just signed to an agent which is really exciting so hopefully there would be some cool shows coming in for next year. We’ve been on tour this year with the Winery Dogs in January/February and that was fantastic, it was such a great experience. We loved those guys so we’ll see what we can do.

Rockpages.gr: In the past,  not so long, there have been some Britihs bands that the press was raving about, for example the Darkness and the Answer, they were presented as “the next big thing”, but later they broke up, or disappeared. Do you think that this kind of exposure is a double-edged sword and might not work very well for the band?

Nathan James: Ahm, I don know… the reason why you make music is because you love it and the reason why you put your album is for other people to love it. It’s all about love really! And I love doing this and I am not going to let anything get on the way of me doing that. We get on very well at the moment, there are no problems. We all know that this is what we want to do, this is why we are alive and people like to see it, so we have to give people what they want. Hopefully, at the same time that’s the reason why Guns’n’Roses will go on tour… Because the fans want it! People want to see it, and that’s what we are going to do. We  are going to give people these songs with the people that recorded them on the album and hopefully make many albums to come and enjoy. 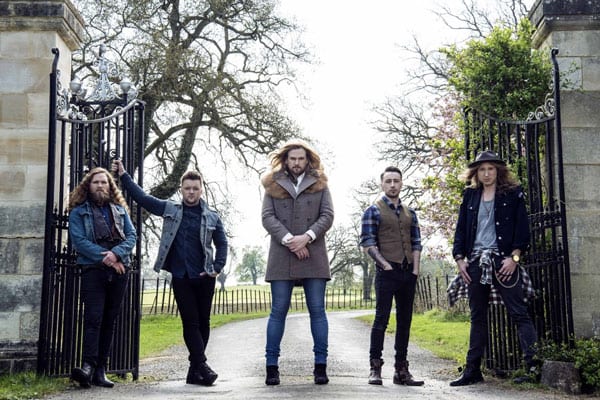 Rockpages.gr: On the album cover there is a crystal ball… how do you see Inglorious in the future in your crystal ball? What are your dreams for the band?

Nathan James:  My dreams for the band are… you want real dreams, or crazy dreams?

Rockpages.gr: I want your dreams…

Natan James: My dreams… I would love for the band to support someone really bin on tour. I’d like to get on tour with Aerosmith, or Bon Jovi… one of these big stadium bands… Iron Maiden! I’d love to tour with those guys. But, also I’d love to do some cool stuff… maybe record a Bond theme song! Make a song for a movie, I’d love to work with some other cool people, I’d like to work with an amazing producer… a Bob Rock, one of these guys. I think that this would be awesome… “Matt” Lange… yeah, there is a lot of big dreams and hopefully some of them will come true.

Rockpages.gr: Talking about producers, the album has such a great production, how did you come up with such a great result?

Nathan James: Ahm, we just recorded it live. It’s that simple! I think that people over complicate the recording process. What you are hearing is everyone in the room at the same time, apart from my vocals. It’s a very true sound. We went through an analogue desk, my microphone which I sung with is 50 years old. So, what you are hearing is real. I think that’s why people like it so much ‘cause they can hear. There is no bullshit… I suppose! It’s just how we sound and that’s what you hear when you go to a live show. Hopefully, when people come to our live show they are not going to be disappointed, because we sound the same. 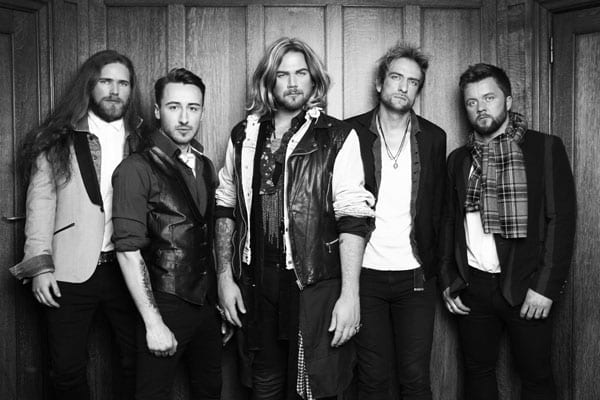 Rockpages.gr: You’ve been on TV, on reality TV actually. Would you say that reality talent shows can help someone who is into rock and metal?

Rockpages.gr: So, if you had to present one of your songs with Inglorious to Simon Caldwell, which one would it be?

Nathan James: I think I’d play him… (pauses) “Girl Got Gun”, because he likes a nice chorus. Or, I could play him something like “Warning”, which is really scary so he’d be scared! I could shout in his face! (he laughs)

Rockpages.gr: Personally, for you as a singer what were your influences, and what made you want to be a professional singer?

Nathan James: Ahm, my influences are probably very obvious… I love Glenn Hughes, I love David Coverdale, Freddie Mercury, I am also a great fan of Ray Gillen from Badlands… I like the big soulful voices, high voices and I like performance too… When I was at school I wasn’t very intelligent, I didn’t get good grades. The only thing I wanted to do was sing and was the only thing that I was good at all my life. Since I was 10 years old and I started to learn how to sing I’ve practiced every day. I worked a lot I had singing classes for 10 years and singing and music were the only things I was thinking about. I had to make a lot of sacrifices… I don’t go out partying, being crazy… I didn’t go to University, I just worked as a singer and learned how to sing because that was all I wanted to do.

Rockpages.gr: Is it hard for you to stay out of the party? Are the others partying very hard?

Nathan James: Yeah! It is, but that’s why the next day your voice sounds great! I’d rather have people enjoy the show and say “oh, my God that guy has a great voice”. I’d like to be remembered as a great singer, so you have to make that sacrifice! 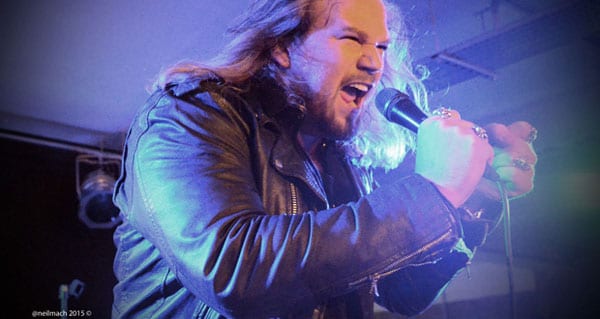 Def Leppard – Vivian Campbell: “I would say this record definitely has my best playing”