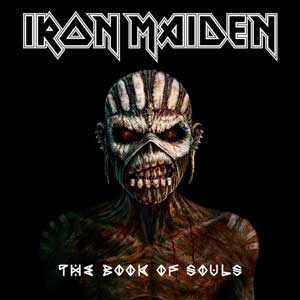 This is one of those moments that you’ve been waiting for many years and always made you wonder: “God, I wish it will be as good as I want…and even more”. You see, Iron Maiden will always be more than just a band for all the true metal fans out there. It’s a way of life; an injection of soul uplift in the difficult struggles of our lives and as you can easily reckon, the listening session of every new Maiden album is a true ritual. I am sure that everybody, by now, has listened to “The Book Of Souls”. If not, just a mere visit to all the well-known social networks will give you a crystal clear picture of what’s going on…Maiden is back and they had delivered a brilliant album! An much needed album that we will listen to it in the years to come and we will all be proud of.

I will be honest with you. I am not the biggest fan of the last couple of records by Maiden. I know that everything is a matter of taste but when it comes down to Maiden we want nothing but perfection. So, it was imperative that “The Book Of Souls” would meet my everyone’s expectations. So, upon listening to the new album –for six times in a row- one thing was certain: “The Book Of Souls” is another true gem in the illustrious catalogue of the British Giants! Personally, I believe that this is the best thing that they’d done sinc e”Brave New World”. Kevin Shirley’s production is pretty good while the lengthy tunes are not tiresome at all. Of course, it goes without saying that all the musicianship reaches top levels and every single band member is doing a flawless job and especially Bruce Dickinson is absolutely sensational.

The absolute highlights are: a) “The Red And The Black” where Steve Harris writes yet another anthem aimed to all the arena crowd all over the world with its vocal melody lines reminding “Rime Of The Ancient Mariner”, b) the title track that refers to the theatrical approach of “Dance of Death”, c) “If Eternity Should Fail” that brings chills down our spine with Bruce’s superb vocal interpretation and d) the closing number “Empire Of The Clouds” that clicks in 18.05 mark and it is a true epic track written (and played) on the piano by Bruce.

All in all, “The Book Of Souls” is what all the Maiden fans had been expecting all these years! And one last thing, I hear some people saying that Maiden don’t have to prove anything to anyone after 35 years on the top of the game. That’s partially correct. But, I know that they want to prove something to themselves! Maiden is the #1 band around the world and judging by the work ethic of Steve Harris and Bruce Dickinson, I know that they approach each record having in mind the excellent quality of such albums as “The Number Of The Beast” and “Powerslave” (just to name two of them). That’s what it means to be on top of the music world.

Highlight: The biggest joy for me was to read all those touching words of all the Maiden fans around the world. I know how much we needed that record by Maiden. Up The Irons!