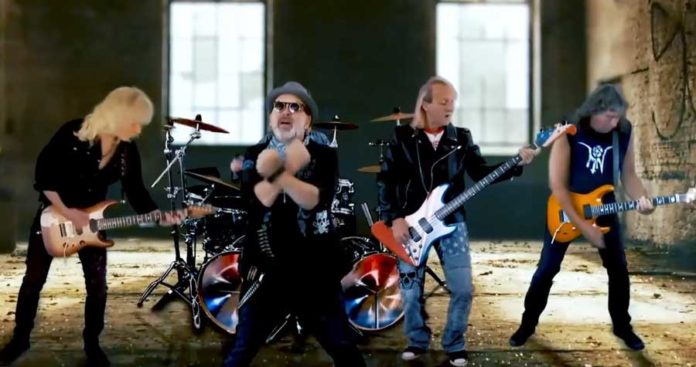 Hard rock veterans Lionheart jus released a new video for their song “Widows”, from their upcoming album “The Reality Of Miracles”, which will be released via Metalville Records in July 31st.

The video was directed by Neil Griffiths who had a difficult task during the shoot it wasn’t allowed more than two musicians at the same space.

On his review about the album, our own Sakis Nikas wrote: “The Reality of Miracles” is really a melodic rock crossroad as we are not strictly treated with the expected British AOR sounds. In fact we get to experience a sonic flirt with the US AOR genre (especially in the song “All I Want is You”), some pompous moments (eg. “Kingdom of the East”) that clearly bring in mind such bands as Magnum and Ten but also pure hard rock elements that are highlighted of curse by the ever present musical identity of Lionheart.

Click here to read the full review of the album!

Lionheart was founded in late 1980 by Dennis Stratton (ex-Iron Maiden), Steve Mann (Michael Schenker Fest) and Rocky Newton (exMSG) with Clive Edwards (ex-UFO) completing the line-up a little later. The band started playing constant live shows, including regular soldout gigs at the London Marquee Club. Between 1981 and 1984 more shows followed, including a performance at the Reading Festival 1981 and as support for Def Leppard, Whitesnake and Saxon.

In 1984 CBS Records offered Lionheart a contract. With the new singer Chad Brown the debut album Hot Tonight was recorded in Los Angeles. Phil Lanzon (Uriah Heep) joined the band as a new keyboardist before Chad Brown was replaced by Keith Murrell (Airrace and Mama’s Boys) in 1985. However managerial and record company problems resulted in the band laying low for the next decade. In the meantime Rocky sang background vocals on the Def Leppard albums Pyromania and Hysteria before joining the Michael Schenker Group. Steve set up his first commercial studio and then hooked up with Rocky again in the McAuley Schenker Group. Dennis began a 15-year collaboration with Praying Mantis. Clive went on to play with Bernie Marsden and UFO.

In 1999 Lionheart re-emerged releasing a double album of old demos which sold well and once again generated interest in the band. In 2016 the organizers of the Rockingham Festival in Nottingham invited Lionheart to play live again. The four founding members seized the opportunity and brought the former Shy front-man Lee Small on board as lead singer. The show received fantastic reviews and the rejuvenated band decided to record another album. Second Nature was released to critical acclaim in 2017 and was voted AOR album of the year by Classic Rock Magazine. This was followed by an appearance at Sweden Rock, mini co-headline tours through Japan with Praying Mantis and a UK tour together with Airrace.

As the Christmas single Mary Did You Know was released in December 2018, the musicians were already recording the follow-up album. Although most of 2019 was taken up by the other projects, the band members got together in downtime to record “The Reality Of Miracles”. The 13 songs were recorded in Steve Mann’s studio in Hannover. Steve also produced, mixed and mastered the album.