It was Tuesday afternoon when the impressive Soundflakes Recording Studios took us in for a chat with The Slayerking regarding their upcoming album. Efthimis Karadimas (vocals/bass, Nightfall), Kostas Kyriakopoulos (guitars, Nocta, ex-Nightfall) and their new member George Karlito (drums) were in a great mood and discussed happily with us every question that came up. Along with them was their producer Marcus Jidell (Avatarium, Soen, ex-Evergrey, ex-Royal Hunt) who came from Sweden and was fascinated with the studio. 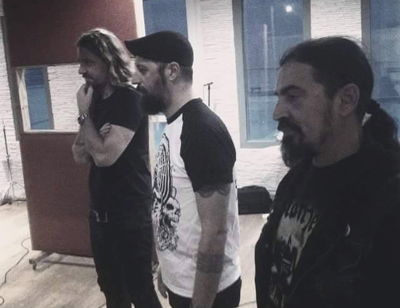 The information we gathered have to do with everything around the band. The songs of their upcoming album are all new, even if their first album was released in January, something that came up very easily for them. The change behind the drum kit (Anna Eleftherou played on the debut) happened because the wanted something different. 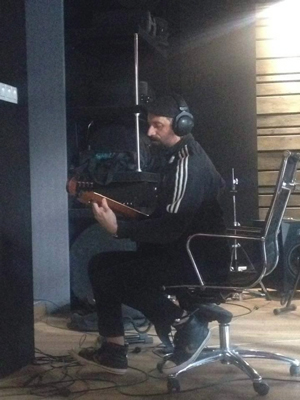 Kostas was trying for some time to bring George in the band and it finally happened. Fun fact, George has the same drums tutor with George Kollias (Nile). The guys asked Marcus to produce their album during the shows that they gave supporting Avatarium and after a 4-track demo he agreed to help them. The recordings will continue in Greece before going to Sweden for the final stage. Also, the band is currently in search for a new record label. 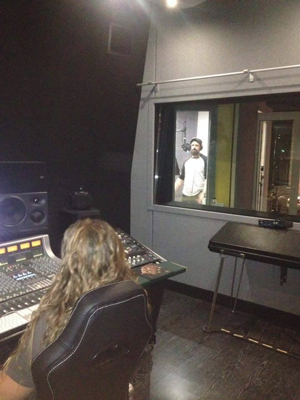 As for the album, it will be called “Tetragrammaton” and will have 9 songs with a total running time of 45 minutes. We listened only to 3 of them, even if they weren’t completely finished, and couldn’t believe our ears. Forget the band who released “Sanatana Dharma”. There is a big evolution in their sound, in the feeling of the songs, in the compositions altogether. Heavier, slightly faster (but not so much to not be characterized as doom) and more in-your-face. Efthimis tries different vocals, Kostas is playing tremendous riffs and George is just the guy needed for the job on the drums. Their 70’s influences and prog elements still remain, but the result is much better than before. Also, they don’t remind of Nightfall as much as the first album. Marcus of course has a big contribution in all of it. The production is amazing, his perfectionism has made the band to rehearse endlessly and to record live searching for the best result. He doesn’t like digital tricks and wants a more natural sound in order to bring out the best out of the band. A great example of how a serious producer can be very important in the creation of an album. When I asked Efthimis, he said that in his 25 years in the scene he hasn’t seen anyone else like him. Also, the titles of the songs we heard are “Bless Those Who Weep And Sell Their Tears To Unbelievers”, “Evil Eye” and “Queen Of Sheba Undresses Before Pulsation Chords”. The music is mostly written by Efthimis and Kostas and the dark interesting lyrics came out of Efthimis’ mind.

In conclusion, we will be called again when the album will be finished in order to make a full listening session before the guys hit the road to promote it. Keep them in mind, they may surprise you.

Bob Geldof – “reaction will not come from music, but from social media”