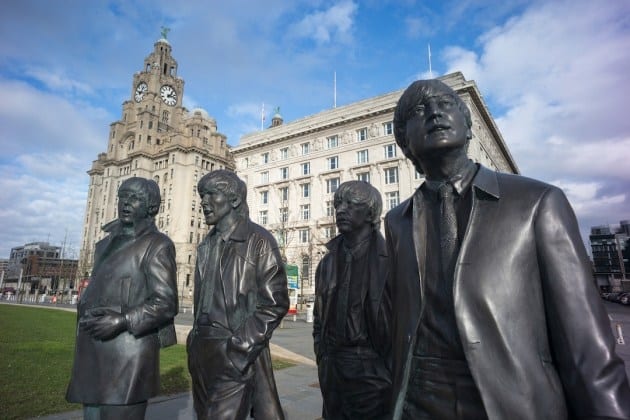 The Beatles‘ hometown of Liverpool is planning a massive three-week celebration of the 50th anniversary of Sgt. Pepper’s Lonely Hearts Club Band, complete with a separate multi-media event tied to each of the 1967 album’s 13 songs.
“It’s never been done before for an album, but Sgt. Pepper is something extraordinary, though there may have been moments when we wished it had fewer tracks,” the celebration’s artistic director Sean Doran told the Guardian. “It’s got that grab – everyone got it, everyone was up for it.”
Paul McCartney is said to have given his blessing for Sgt. Pepper at 50: Heading for Home, to be held from May 25 May to June 16, but he and fellow surviving Beatles member Ringo Starr are not expected to attend. Scheduled performers include Meow Meow, an Australian cabaret performer who will lead a procession of brass bands through town; artist Judy Chicago, set to create a giant mural at Stanley Dock; and choreographer Mark Morris, who has crafted a dance piece called “Pepperland.”