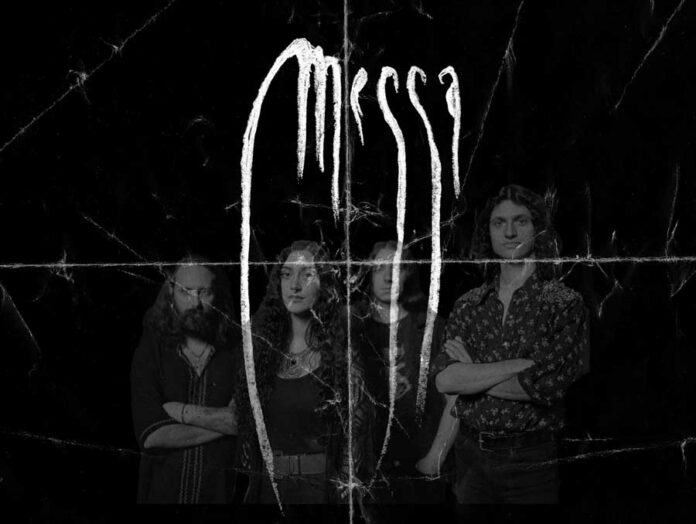 For Konstantinos mindcrimek Vlachos MESSA’s latest album “Close” was on the top of his list with the best albums of 2022. Looking forward for their highly anticipated upcoming live shows in Greece (Athens/Thessaloniki, 26&27/1) he talked with them trying to learn how they managed to offer us their best work up so far…

Rockpages.gr: Hello and congratulations for the new album, easily my favorite album in 2022.

Eυχαριστώ! (“thank you” in Greek)

Rockpages.gr: First of all introduce us to Messa, tell us a few words about how you were formed.

Messa started in 2014, when Sara (vocals) and Marco (bass) started developing a concept and some music for this project. Very soon, Alberto (guitar) and Rocco (drums) joined, and everything fully began. So far we’ve published three albums.

Rockpages.gr: They say that the third album is the most difficult for any band, did you feel or had any pressure to write it?

Yes, many people say the third album is said to be the “make it or break it” album. But to be honest the first reason we do music is to express ourselves, for us it’s like a cure. This being said… Yes we did, but the major pressure came from ourselves!

Rockpages.gr: How would you compare “Close” to the previous albums?

“Close” took a longer time to be created. We wanted to step out of the box using different instruments – but we also wanted to keep a ‘metal’ feel to the album. It was a continuous research on eliminating the unnecessary, we did a lot of self-analysis and tried to keep the concrete message, still explaining all we wanted to. The ‘contrast’ element we like to include in our music is present in “Close” as well as the previous albums. In “Feast For Water” it’s the presence of Rhodes Piano, in “Close” it’s the acoustic instruments like Mandolin and Oud.

Rockpages.gr: Did you follow a specific way of writing music this time? Were you all together jamming, or the main parts of each composition was ready before you got into the studio?

We really need to be in the same room all together to make our music. Interplay is the most important thing for us as a band. That real time feedback you get from the others when playing new ideas is very important. Plus there’s always some improvisation going on, something you can’t really enjoy without others. With “Close” we wanted to stand by the concept which lies behind the title of the record by creating and recording it while being physically in the same room.

Rockpages.gr:  Were the pandemic restrictions a problem for you?

A lot of ideas for this album were developed on our own at home (for obvious reasons), but every time we could we’d run as fast as possible to the rehearsal room to spend hours in there. We had to postpone the recording sessions of “Close” at least two or three times, and it was frustrating because there’s a certain ‘urgence’ we feel in making music and transforming our vision into reality. But it could be a lot worse.

Rockpages.gr: What are your music influences as a band? Because the music spectrum on your compositions vary from doom metal to crazy blasts and then of course those exotic world elements. For me the new album is more diverse than ever

We have our own view on this. Everything can be an influence. We can’t separate the unpredictable channels of inspirations, anything can have a resonance within us. For sure the work of other bands has played a role on how “Close” came out: Dead Can Dance, OM, Killing Joke, Thergothon to name a few. But it’s not about genres, it’s more about feeling and depth. The question we always ask ourselves is why certain bands sound the way they do… What is the way of thinking behind their work. We really listen to everything, from Morbid Angel to Stevie Wonder.

Rockpages.gr: I loved the general dark atmosphere throughout the album but I wonder, was this reflected in the lyrics too? What are the main lyrical themes?

Probably “Close” features our darkest lyrics so far. Maybe it’s just our perception. In “Close” there’s no main lyrical theme, but there’s a big spectrum of feelings. From frustration to anger to guilt. We like when people find their own interpretation and meaning, though. There are many layers. One sure thing is that Sara only writes about things that hit her deep on an emotional level.

Rockpages.gr: Who is responsible for the interesting artwork?

It has always been important for us to have a ‘fil rouge’ since the start of Messa, we care a lot about the visual outcome of our band. Art direction is cured by Marco and Sara. When it’s possible they do the process of Design, Photography etc. on their own, they like to work on the imagery of our music and they have clear ideas on how to represent it. But sometimes we also do like to collaborate with talented friends and professionals that understand our ideas and bring them to reality.

Rockpages.gr: Is it related with the title somehow like the previous album covers?

In the case of the “Close” cover, it’s a 1930s photograph taken in Algeria/Tunisia by E. M. Schutz. It was love at first sight. This picture brought the emotions and sensations to visual reality just about the way we wanted from “Close”. It features three women performing Nakh, a ritual dance performed by dancers along the Algerian/Tunisian border. They let their hair repetitively swing loose causing a trance-like state during the ritual. This dance is fascinating and intense, so it was spontaneous to include it in the video for “Pilgrim”.

Rockpages.gr: I am sure that all songs represent the band but do you have a favorite song on the album? One that you enjoy more to play live on stage?

It would be impossible for us to cherry pick and decide which song is the one we like best… Imagine it just like how a mother can’t choose a favorite child!

Rockpages.gr: We will finally see you here in Greece, I know you played at Mammoth festival already, but now two shows are announced in Athens and Thessaloniki for your own headline shows. What should we expect from you on stage?

Deep-diving into a cave.

We are very much looking forward to coming to Athens and Thessaloniki. See you there!