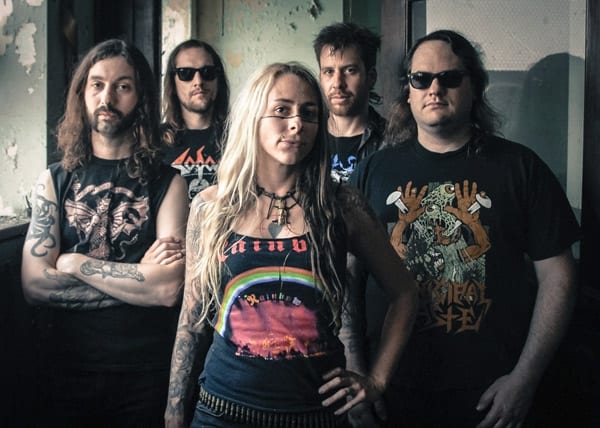 Lady Beast is a Heavy Metal band from Pittsburgh PA. Now in its 7th year, the band has played hundreds of shows, played festivals, done tours, and sold thousands of albums. Upon hearing a recording of the band, it’s easy for the listener to pick out the band’s musical influences such as NWOBHM, Judas Priest, Iron Maiden, Motörhead, Dio, etc., but that isn’t the only influence, as the band draws heavily on the DIY ethos of the punk scene, and Lady Beast has always done everything on its own: booking tours, doing band photos, printing t-shirts, setting up shows at home, writing songs, putting out albums (released on bassist Greg Colaizzi’s label, Cobra Cabana Records), and driving the van. Anyone that has seen the band live can attest to the band’s energy, and singer Deborah Levine’s vocal ability, charisma, and love for what she is doing.

Lady Beast is getting ready to release a new EP titled “Metal Immortal” with 4 new Metal songs in the style that the band is known for. The EP, which will be available as a vinyl and download release, is also a debut for the band’s new lead guitarist, Andy Ramage. Andy is a familiar face, as he is the older brother of drummer Adam Ramage, and the two also played together in Oh Shit They’re Going To Kill Us. Andy’s style fits perfectly with the songs that rhythm guitarist Christopher “Twiz” Tritschler has been writing for the band. In addition to the EP, Twiz and Andy are writing songs for a full length, hopefully to be recorded next year. October is looking to be a busy month for Lady Beast. The band plans on releasing the EP and doing a tour with Seax.