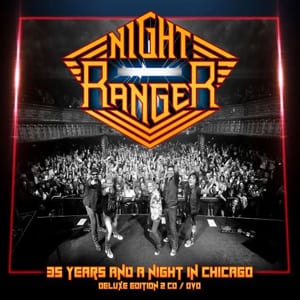 Night Ranger has just released a double live CD+DVD of their last tour that signaled the 35th anniversary of the band’s official formation. For those who have caught Night Ranger in live action, we can’t add much since they already know what this is band is capable of when it comes down to live shows. Blades and Keagy are absolutely sensational in the vocals, Gillis & Kelli are two of the finest guitarists in the entire hard rock spectrum while Eric Levy remains true to the style (and why not overall appearance) of the original keyboardist Alan Fitzerald. As for the live versions of the songs, I dare to say that the vast majority of them sound awesome and far better than their studio counterparts.

This is more or less the unwritten rule when we are talking about all the Night Ranger live albums and “35 Years And A Night In Chicago” is not the exception to this rule. It features songs that cover (almost) the entire back catalogue of the band (I’d have loved to listen songs cued from “Man In Motion” and “Neverland”) and naturally the main spotlight I turned on the band’s first three classic records. Night Ranger is like old wine…it becomes better as time passes by and this is evident on the new live album, too. In the highlights, we should include the presence of a brand new song called “Day & Night” that will be included in the band’s upcoming studio record while it would be a mishap if we didn’t underline the magnificent takes of “Rumors In The Air” and “Eddie’s Comin’ Out Tonight”…sheer brilliance!

I am fully aware of the fact that this album is mainly forwarded to the hardcore fans of the band who simply want to have everything and anything related to Night Ranger. But at the same time, I’d strongly suggest to all other to check it out…I am sure that after a single good listen, they would want to catch the next flight for a Night Ranger show!

Highlight: The new studio album by Night Ranger is expected in the first half of 2017.