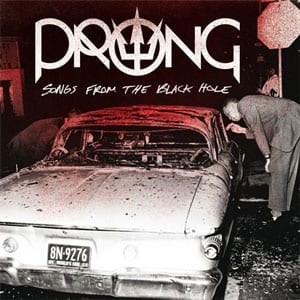 After last year’s ‘Ruining Lives’, which was a fairly solid effort, Prong are back with a covers album, recorded in a week in Berlin.

Tommy Victor smartly avoided choosing overplayed songs (Meanwhile in Burbank by Stone Sour comes to mind) and honors his punk rock origins covering songs from groups like the Adolescents, Black Flag and Hüsker Dü. Once more the influence of British hardcore punk in heavier music is revered, thanks to Discharge’s ‘Doomsday’ opening the record, similarly to how ‘Free Speech for the Dumb’ takes off ‘Garage Inc.’. To clarify things, if there had to be a ‘brother’ to this record it would be ‘Undisputed Attitude’ by Slayer.

The ‘unexpected’ choice is ‘Cortez the Killer’ by Neil Young – a song that Prong should probably have left alone.

As a whole, ‘Songs from the Black Hole’ is a well made tribute, but it doesn’t have that one truly interesting cover in it.