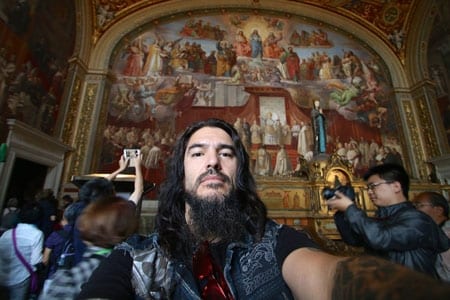 since security officers kicked out frontman Rob Flynn for taking photos and videos, although he assumes that the number “666” printed on his hoody must have played its part. Check out what he shared on Facebok:
The Sistine Chapel is a must-see-before-you-die type thing. So, of course I had to document it and bring my video camera. The guards didn’t stop me one bit as I filmed everywhere and as I entered the Sistine Chapel I was journaling myself walking and taking “you guys/ the viewer/readers” through what I was doing. In the midst of doing so it was then that a guard warned me in broken english “no camera!” Of course I disregarded him. I don’t know what it is with me but when someone tells me not to do something that I want to do, that “fuck you” button gets hit. So I just hung the camera around my neck and kept filming.
I snapped the one photo included below of the famous “hands”, and as I watched other people taking iPhone photos, I thought “hey, why not… they didn’t get thrown out…?” When in Rome, right? Now… maybe cause I already received a stern “warning”… or maybe cause I had a Duff’s Brooklyn hoodie with “666″ on the hood tied around my waist… but ya know… let’s just say I kinda stood out, and dudes were… uh… eyeing me. I snapped 3 iPhone photos, and security swarmed on me. Poor Jern and I got escorted out lickety-split-like which in the end was a good thing as there was a line to exit! So I saw it as a way to cut in line and get out first, LOL!!
I had to laugh. When it was all over I just literally laughed out loud! “Wow, I just got kicked out of The Sistine Chapel!” And I still got these pictures! Take that motherf—ers!!!