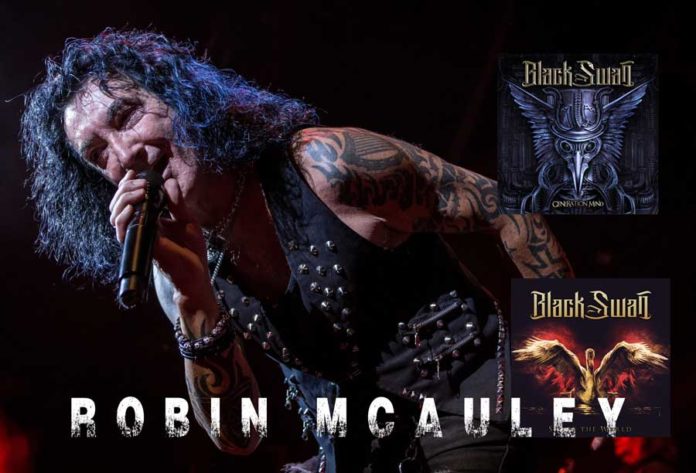 The first time I ever heard Robin McAuley’s voice was MSG’s “Nightmare” and I still remember how much I was impressed by his grainy and powerful vocals that sounded warm, melodic and metal at the same time. Of course the ’92 self-titled album was played to death and it’s still one of my favourite albums. This was the last one for Robin with Schenker until recently when Micky gathered all his ex-singers for Michael Schenker Fest to record and play live. Black Swan’s second album was very impressive with Reb Beach, Jeff Pilson and Matt Starr along McAuley reminded me a lot of MSG in the late ‘80s – early ‘90s. This was the opportunity to talk with the Irish singer. Interview: Yiannis Dolas

Rockpages.gr:  The new album is great, better than the debut. What did you do differently? Did you acquire better chemistry?

Robin McAuley:So glad you like it. Thank you. We really didn’t do anything different for “Generation Mind” regarding the process of writing. Jeff and Reb got together at Jeff’s studio and got the music together. Jeff sent me the music and I wrote the melodies and the lyrics. During pre-production Jeff would suggest a lyric change or sometimes a melody change and we’d start recording. We felt pretty good about the whole selection of songs as we progressed. Fair to say we are all really happy with this one and once again Jeff’s production is superb.

Rockpages.gr:  How did you guys cope with quarantine and lockdown? Did it give you the chance to focus on working on the new album?

Robin McAuley:Indeed it did!! During lockdown I managed to write and record my solo record “Standing On the Edge”. Then I’ve been working on a separate project with an amazing Italian composer Max Di Carlo. Max works mostly on movie soundtracks but wanted to add another dimension to some of his music. We have been collaborating on some amazing new music which is completely new for me and hopefully will be available in the near future. I’m really excited about it. Adding to that, I will begin recording my next Solo record soon as I return home from Michael Schenker’s 50th Anniversary World Tour.

Black Swan’s “Generation Mind” was also written and recorded just as some Covid restrictions were lifted in the US. Album was dropped April 8th and all singles are watchable on YouTube.

Rockpages.gr:  At some points the album reminds of Scorpions and MSG, are you sure you didn’t have Michael Schenker as a guest, hidden a closet in the studio maybe?

Robin McAuley:Ha!!!  This is all Reb Beach. His playing is on Fire on this record. He’s such a great guitarist and has so much melody. I love it!!! I suppose when you sing in a particular style some of that will always shine through no matter what you record. It’s who I am.

Rockpages.gr:  My favourite tracks are “See You Cry” and “Killer On The Loose”, can you tell us a few things about those?

Robin McAuley:I like to form stories in my lyrics. Jeff always tells me he loves the stories 🙂

“Killer On The Loose” Our elusive Jack The Ripper story. How he used the bombing of London during WWII to conceal his evil doings. He was never caught!

Rockpages.gr:  How hard is it to make a good album nowadays? What do you need to do to make it sound great?

Rockpages.gr:  Black Swan are consisted from very well-known musicians, you can call it a supergroup I guess. What’s the key making a project like that work and deliver such a good result for the second time in a row?

Robin McAuley:I think it’s because we don’t regard ourselves as a supergroup (which we hate)

that makes this sound more of a band. We all like good songs, strong melodies, big memorable choruses. We don’t spend a lot of wasted time thinking about it. We hear it, we write it, we like how it sounds. Done!!!

Rockpages.gr:  Your voice in the album sounds like not even a day has passed since 1989! How do you do that?

Robin McAuley:You are too kind! I take great care of my Instrument but I too get tired and when I do it’s not something you want to hear. Ha! But, thank you.

Rockpages.gr:  There is a nostalgia thing about the 80s. Bands are trying to emulate the sound, the feeling, the music of that decade – even if they weren’t even born yet- sometimes successfully, but sometimes not. Is that a good thing or bad? Was everything cool about the ‘80s?

Robin McAuley:Well I can totally relate of course 🙂 It was a great time and great songs that so many of today’s kids listen to. The fashion of the 80’s has never really gone away. Skinny jeans, Converse. Flares etc. Colorful hair. Just look around it’s got 80’s written all over it. So many people laughed at us long haired 80’s Rockers, but now who’s laughing? Most car commercials on TV use soundtracks from the 80’s because it was and still is great.

Rockpages.gr:  Michael Schenker did an amazing thing having all his singers singing for Michael Schenker Fest project. I don’t think anybody has done this before. How did you feel taking part in that?

Robin McAuley:I loved it and the fans loved it. It was such a great idea and as soon as I was invited to participate, I had no hesitation. So much material too choose from all in the same show with the original singers. Separately and together…Awesome!!!!

Rockpages.gr:  A lot of people say that Michael is difficult to work with etc, what’s your opinion having worked with him in the past and present? What are his demands from his singers? Is he tough? Fair? Is he open to suggestions?

Robin McAuley:That’s a question for Michael. He’s a perfectionist which is why he’s such an amazing guitarist. We singers have a job to do and it’s our responsibility to do it the best we can.

Rockpages.gr:  What do you think of Ronnie Romero, who is singing on the last MSG album?

Robin McAuley:I think Ronnie has an amazing Voice and a very long future ahead.

Rockpages.gr:  What do you remember from your days with Far Corporation and Robert Plant congratulating you for your version of “Stairway To Heaven”?

Robin McAuley:Not too many people get a handshake and a congratulations from Robert Plant, particularly after recording a cover of Stairway to Heaven. Probably the highlight of my career. Me a snotty nosed little Irish kid…..I still think about it. Wow!!!!

Rockpages.gr:  It’s a fact that you’ve never been to Greece for a show. That’s a shame. Do you think you will make it at some point?

Robin McAuley:Oh my God! Please invite me… I would love to visit and perform in Greece.