The second day at Terra Vibe Park was the mother of battles, the day that everybody was waiting for a long time now, the gig of the summer, maybe of the entire decade, not just of the year. With more than 36,000 spectators Maiden made a triumphant return in Greece after a long absence and the fans were there waiting… 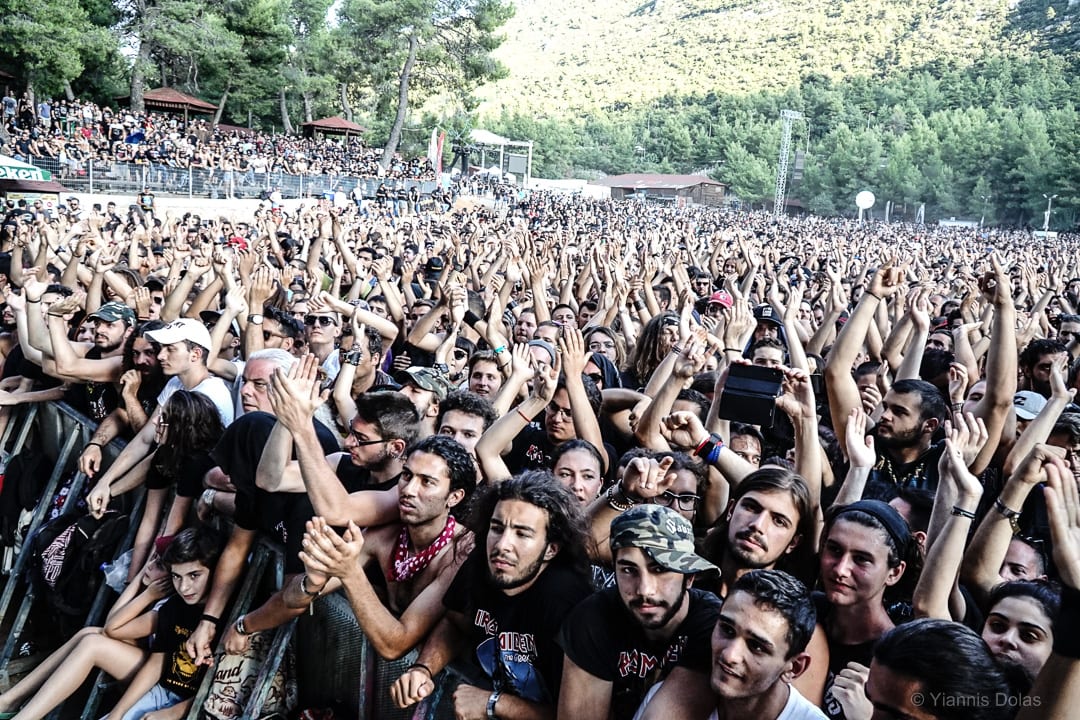 Monument stormed on the big stage in high spirits following their idols, Maiden and Running Wild. Their intensions were good no doubt about that, but the excruciating heat and some sound problems didn’t help them at all. Despite that, they didn’t lose faith and stubborn as they are soldiered on and managed to win the crowd under their feet. Peter Ellis showed once more that has all the qualities of a great performer and his band is worthy. Let’s hope for better circumstances next time. 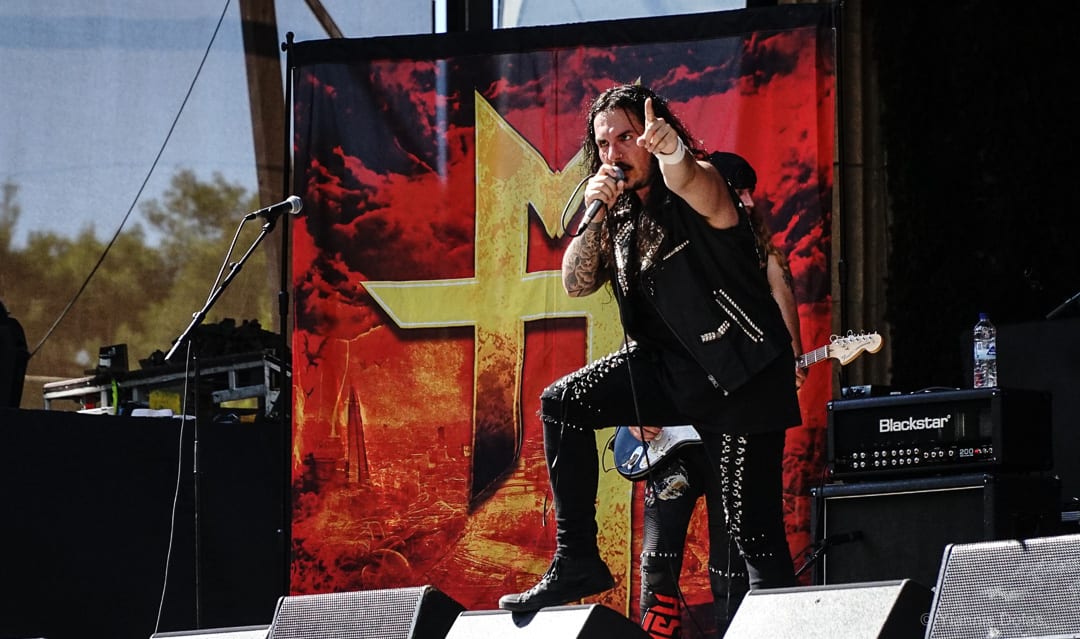 The heat made a huge impression on Steve Harris’ son George band, since the singer Matt James mentioned it on every gap in between songs. The truth is that James’ on stage look was closer to Brit pop bands like Oasis and Blur (disgusting!) with his dyed blond hair and a weird metrosexual sweater. The band was honest, broke a sweat and the highlight of their performance was when Tony Maue jumped off stage and into the audience and run around them while still playing. We have to wait for their album with James on vocals to have a better idea and reach to the conclusion if the apple fell far from the tree or not.

Betrayal of the Mind, The Merciful One, Promised Land, The Death March, Eye Among the Blind, Salem’s Fate, Surrogate, My Revenge, Angel in Disgrace 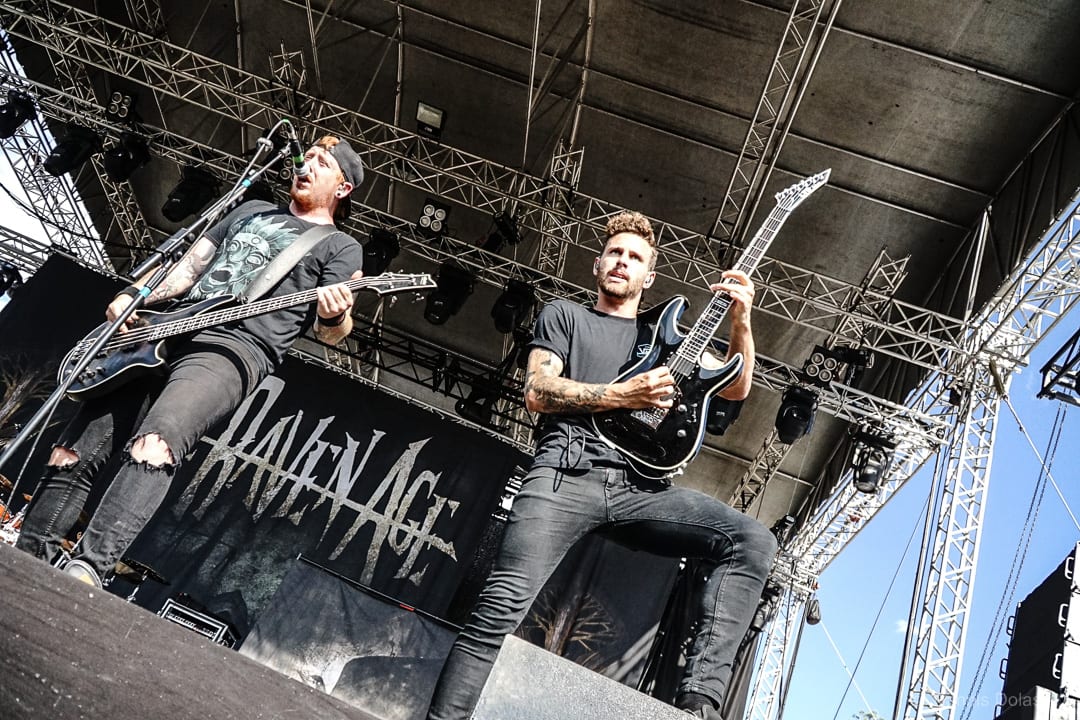 Tremonti
With four albums already under his belt Mark Tremonti showed up for the first time in Greece to play a show with his band. It’s true that we’d prefer to see them with Alter Bridge, but until this happens we will have to suffice with his solo effort. As a frontman Mark handles great the double role on guitar and vocals. His band and especially the bassist, Tanner Keegan, is very lively. The dude was all over the place spinning aroung bangin on his bass guitar full of passion and energy. Now that’s what the crowd wants to see. I’d say that Mark managed to handle the audience pretty well with his moves and grimaces and made it participate. As a matter of fact, he is not new to all this as except from Alter Bridge that we already mentioned he was also a member of Creed. The set was balanced and from his latest album “A Dying Machine”, played only two songs.

Another Heart, You Waste Your Time, My Last Mistake, So You’re Afraid, Catching Fire, Flying Monkeys, Radical Change, The Things I’ve Seen, Throw Them to the Lions, A Dying Machine, Cauterize, Wish You Well 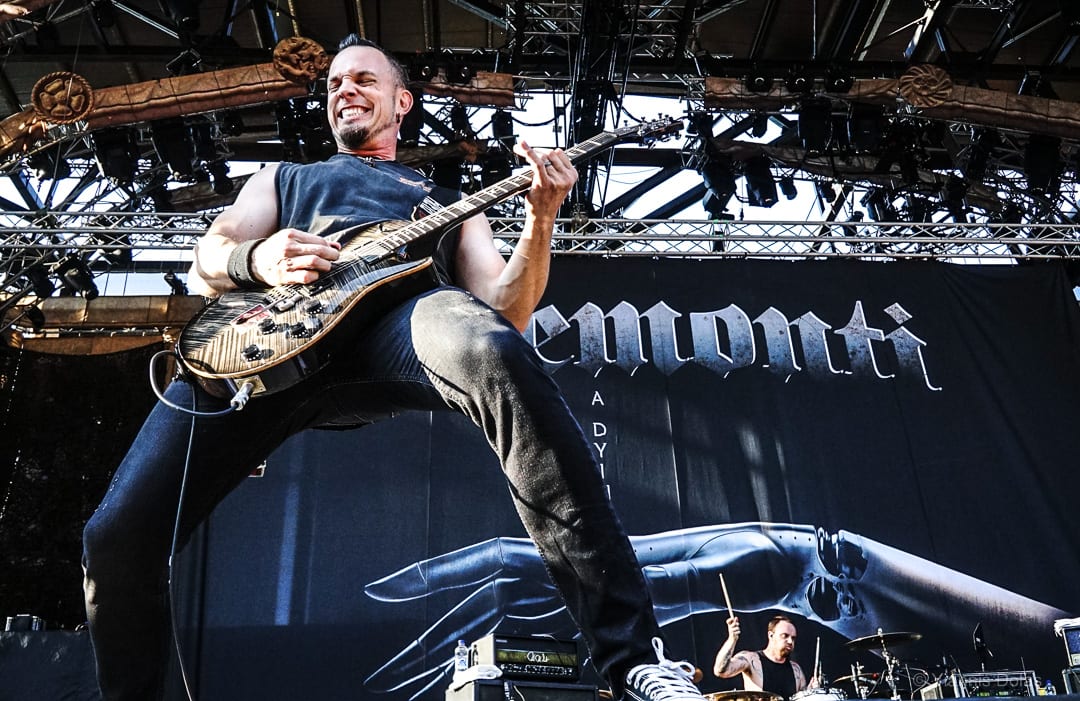 Volbeat’s first ever show on Greek soil was a total success as it was noticed by the band itself. The audience was going nuts dancing and singing out loud all the band’s songs. The band, despite the hot sun coming straight to their face right from the beginning didn’t even blink and started pounding with a triplet of great songs, together with their classic cover “I Only Wanna Be With You”. Total mayhem in the audience. It’s a real shame that Volbeat didn’t play on the big stage because I am sure that they would have made that sea of people that was waiting for Maiden to take the stage to shake like in a mixer! 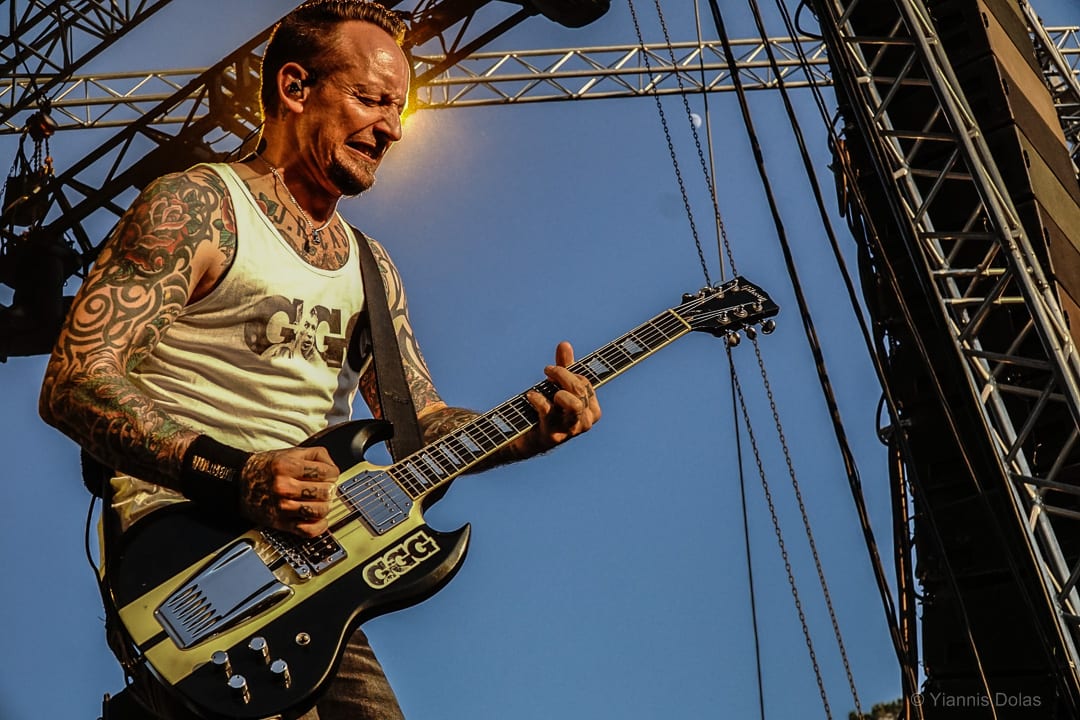 The band’s connection with the audience was great and I am sure that except from the hardcore fans the Danes won loads of new ones that were watching them for the first time ever. The only bad thing about their performance was an outage on the power probably that made the volume drop to 30% while the band was playing. Fortunately, it was fixed immediately.

It was great to check out a band on the top of its game that plays in the biggest festivals and releases a great album after another. I wish that the love and affection that the crowd showed them will motivate a Greek promoter to bring them in Greece again, but this time for a headline show. I repeat: it was a shame that Volbeat played on the small stage!

The Devil’s Bleeding Crown, Heaven nor Hell / A Warrior’s Call / I Only Want to Be with You, Lola Montez, The Lonesome Rider, Sad Man’s Tongue, Slaytan, Dead but Rising, For Evigt, 16 Dollars, Seal the Deal, Let It Burn, Black Rose, Fallen, Still Counting 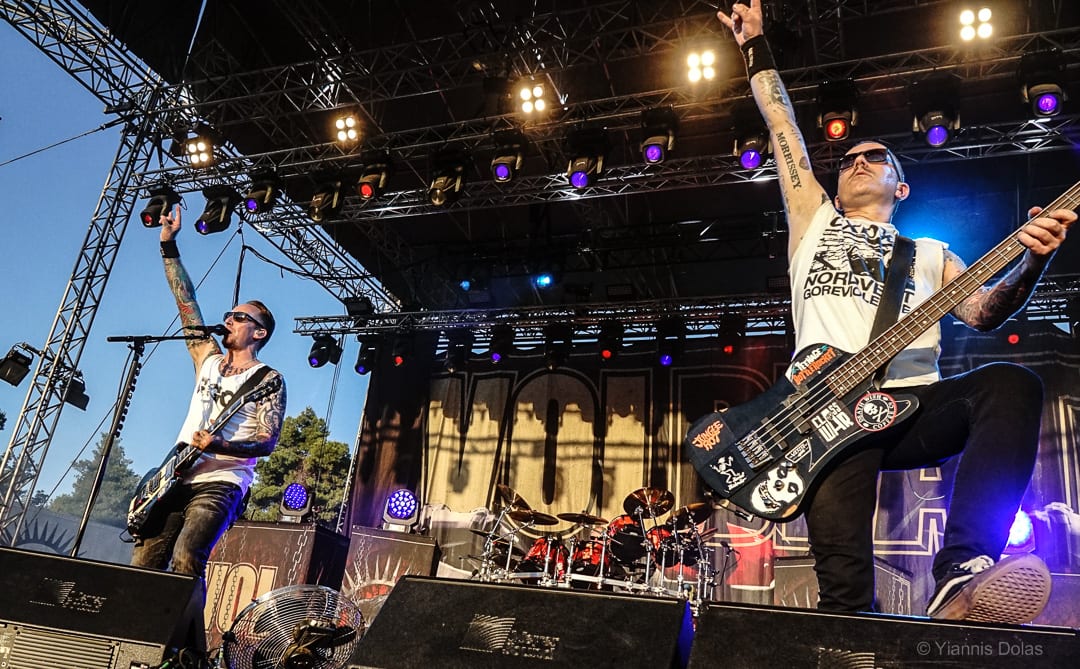 What should I write about the majestic Iron Maiden performance in Greece? 40.000 fans were there and the rest of the metal community read about it and saw videos/photos of this unbelievable Maiden show. Taking aside personal preferences and musical taste, this specific concert “erased” all the previous ones of the two-day Rockwave Festival and it was quite objectively the best Maiden performance in Greece! 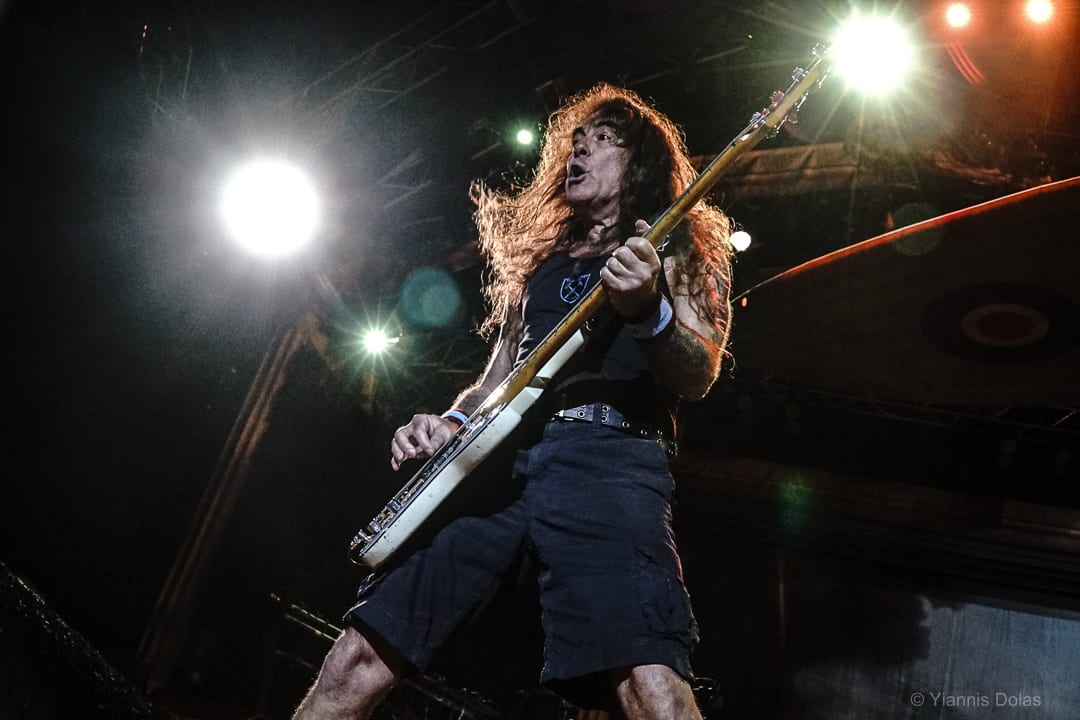 The…take-off with “Aces High” reveals the huge Spitfire airplane of the Second World War flying over the center of the stage and Bruce Dickinson flying over the monitors on the stage! Winston Churchill speech through the P.A.  in the beginning of the show reminded us all the “Live After Death” album and the crowd didn’t stop singing along to the lyrics. The war-themed trio of songs was completed with “Where Eagles Dare” and “Two Minutes To Midnight” and it is instantly apparent that Maiden are on top form! Having on their side the crystal clear sound, the impressive backgrounds, the crowd’s unparalleled reaction and the one and only Bruce Dickinson (the best metal frontman), Maiden put on one hell of a theatrical show with a constant exchange of costumes by Bruce, fireworks, pyrotechnics and all these wonderfully based on the theme of each song. 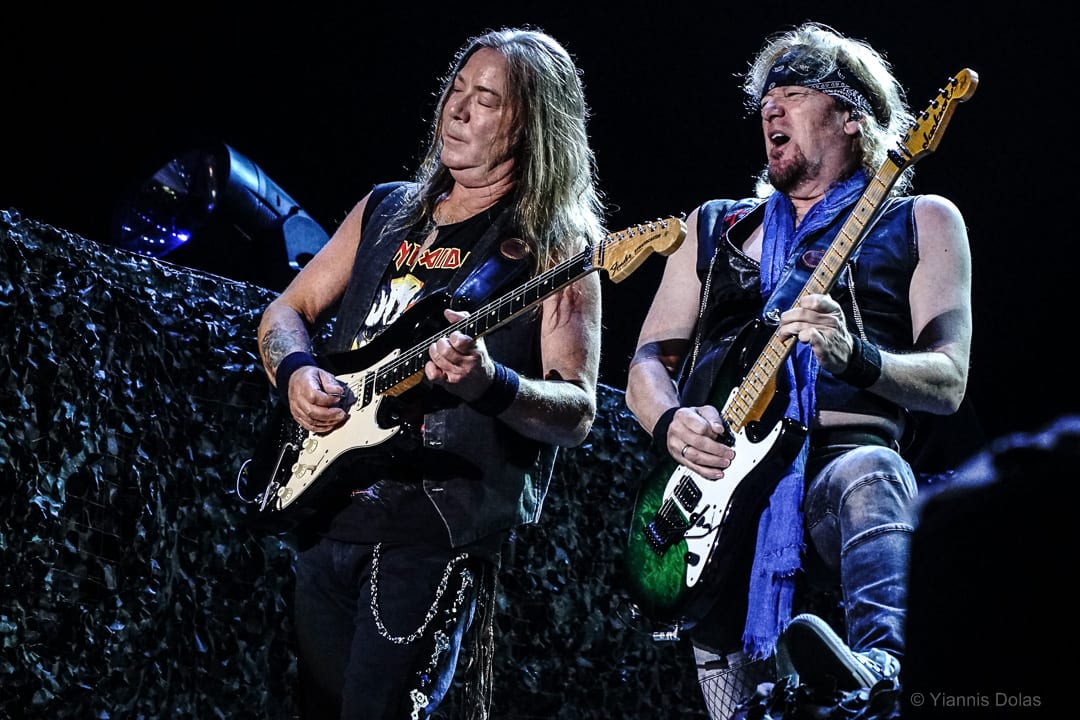 Eddie makes its appearance during “The Trooper” and engages in a fight with swords with Bruce, the Blaze-era songs (“The Clansman” & “Sign of the Cross”) are taken into a higher level while “Revelations”, “The Wickerman”, “The Number of the Beast” and of course “Fear of the Dark” will be permanently marked in our minds!

“For The Greater Good of God” should be already considered a classic number while the encore of “The Evil That Men Do”, “Hallowed Be Thy Name” and “Run To The hills” left us literally and figuratively speechless! Maiden bid us farewell and Dickinson once again teased the Greek audience with a few lyrics of “Alexander The Great”…well, maybe next time! 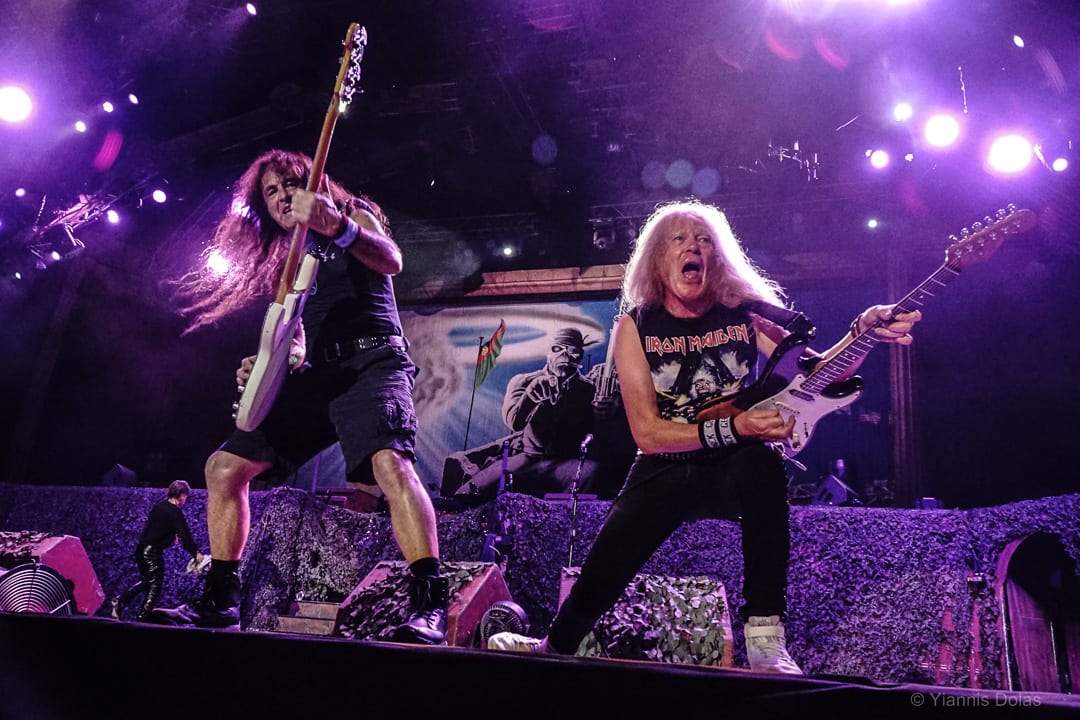 I’ll say it again: this was the best performance by Maiden in Greece! The band’s power is beyond any measure and the younger generations follow them along the way! After all, Iron Maiden is gonna get….all of you! Steve, Bruce, Dave, Adrian, Nicko & Janick…a simple THANK YOU is not enough! See you soon!

Aces High, Where Eagles Dare, 2 Minutes to Midnight, The Clansman, The Trooper, Revelations, For the Greater Good of God, The Wicker Man, Sign of the Cross, Flight of Icarus, Fear of the Dark, The Number of the Beast, Iron Maiden
Encore: The Evil That Men Do, Hallowed Be Thy Name, Run to the Hills 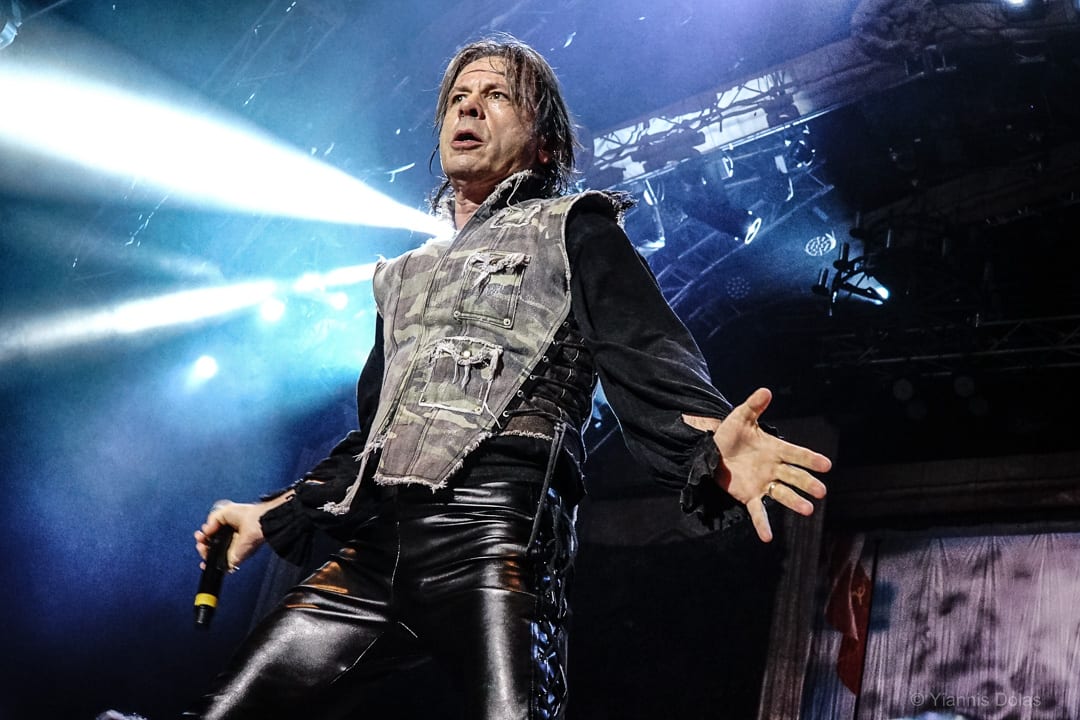 By concluding the second day this year’s Rockwave has come to an end, at least for the metal fans. Honestly, it’s been one of the greatest so far and with a record attendance. The second day was beyond than packed with lines of cars from the National Road to the venue that forced the promoters to postpone the start of the show in order for everyone to be able to get in on time. After the show it took almost two hours for the cars to leave the area because of the heavy traffic jam that was created. At least everyone who was there can say that they experienced a hell of a night until the next one! 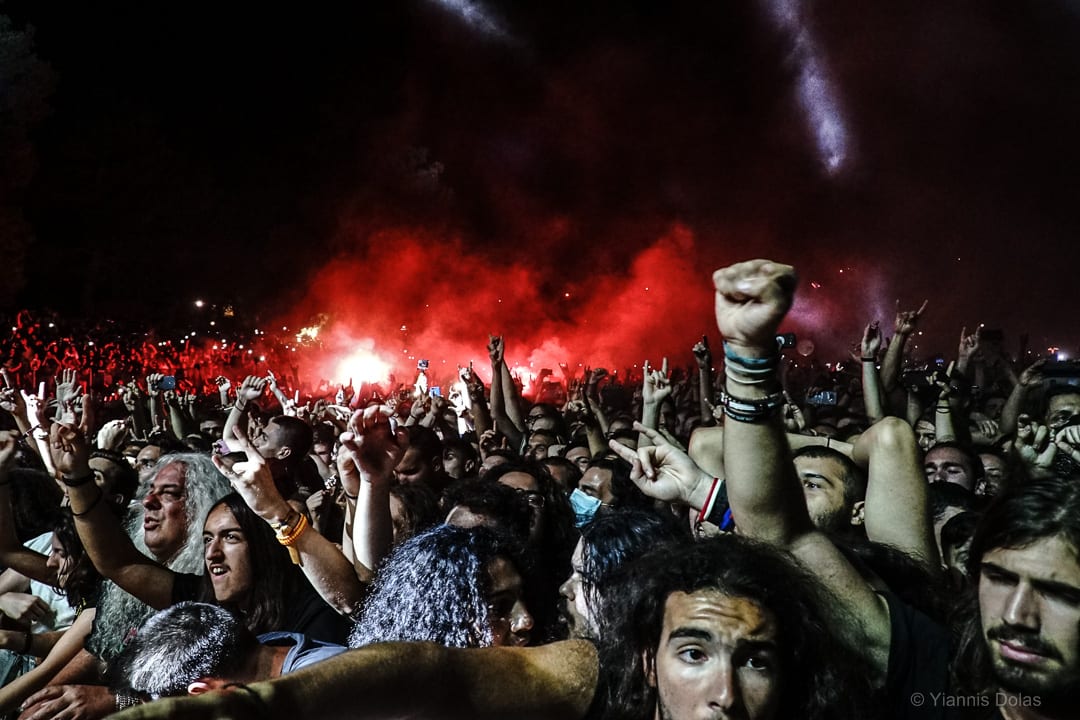