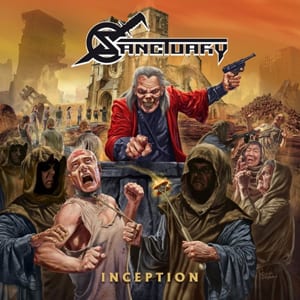 The album of the year 2017 is already out there since February. This fact simplifies the compiling of the top 10 list and gives us a 10 month period to look for the second one. That is the simple truth concerning Inception. It doesn’t matter that it was actually recorded 31 years ago. Its historical and musical values remain huge to this day.

But what is Inception all about? It’s the lost Sanctuary demo containing the recordings that brought the contract with Epic and contained the compositions that comprised the spine of Refuge Denied. The demo was considered lost or even destroyed and only a few terribly sounding bits could be found mostly in YouTube. The accidental discovery of the tapes literally lying in muddy water gave some hope for restoration and with meticulous work the effort paid off and Inception became a reality. The release contains 9 songs, 7 of which are also featured in Refuge Denied plus 2 more tunes that didn’t make it to the album for unexplained reasons.

The first thing that the listener realizes is the amount of damage that Dave Mustaine’s production brought to the compositions. The difference between the demo and the album is immense. But despite his efforts to degrade the material, Refuge Denied will always shine due to the quality of the band and the songs. After all you can gag and chain Cerberus but that doesn’t mean that he ceases to be a fearsome beast of the underworld, ready to devour you in any given chance. Inception delivers the primal shape of the songs as composed and executed by the band, without outside interference. And the thought that a group of 5 young musicians debut in such a way is intimidating to say the least. I am pretty sure that no current band, aided by all the perks of the digital age, can present something similar. The guitars have the proper sound at last, spewing flames and cutting like razors. I dare to say that they sound Painkiller-ish, years before Painkiller. There is a considerable amount of differences in all aspects. Some songs are faster that the album versions, some slower and darker while the cover of White Rabbit is literally a radically different song.

The two songs that actually debut after 31 years deserve a special mention. I am Insane and Dream of the Incubus can easily stand beside the best songs from Refuge Denied and finally after all these years they get their deserved place in the spotlight. Do yourselves a huge favor and obtain this colossal chapter in U.S. Power metal history, preferably in its vinyl edition which contains a wonderful scrapbook featuring the early story of the band and rare photo material.