The interview via Skype with Sanctuary’s Warrel Dane and Lenny Rutledge evolved into a very interesting discussion about the present and the past of the band, but also about Arch Enemy and the Tea Party. Take a look at what they had to say. (Ed the interview was recorded before the Sanctuary shows in Greece). Interview: Romanos Terzis

Rockpages.gr: All the Sanctuary fans are really excited that you’re coming back to Greece, this time with a new album to promote. How have the new songs been translating live, do they gel well with the older material?

Lenny Rutledge: Yes. I think they gel and come across really well, and we have a good time playing them. The band has grown; we like playing all the material but it’s nice to play some of the new stuff, people seem to be enjoying it everywhere we play.
Warrel Dane: I have to reiterate that. I think that the new songs are going over very well live and we really have a good time playing them. This is a new step, a natural progression and it bodes well for the future.

Rockpages.gr: Should we expect an even mixture between the 3 albums as far as the setlist goes? 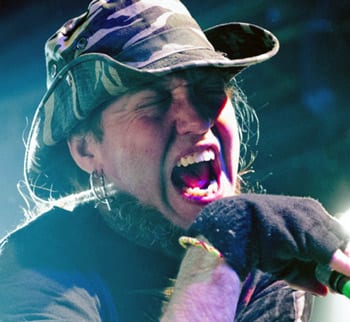 Warrel Dane: Yes, for sure.

Rockpages.gr: Great. So, the album has been out for a few months now, what sort of feedback have you received so far?

Warrel Dane: Well we really haven’t got one bad review. I always look for the bad ones, I like them because they keep me grounded I guess.

Lenny Rutledge: I’ve seen a couple, but even the bad reviews aren’t so horrible. People really responded to it. I was kind of surprised; I thought people would be a little more apprehensive about the release.

Rockpages.gr: I think for some people it has been hard to be objective about the album because they keep comparing it to your older releases. Does this sentimentality and nostalgia bother you or do you see it as a challenge to compete with the past in some way?

Warrel Dane: People cling to the past. It’s not 1988 anymore so the record was never going to sound like ‘Refuge Denied’ which is what a lot of people wanted. Every band, no matter how long they were separated from each other, they grow, they learn and they change. This is exactly what we’ve done and I think we’ve done it proper style.

Rockpages.gr: I agree. Since it has been such a long time since you’ve put out any new material, I imagine it was interesting for you to hear the way you guys sound in the 21st century. Was there a moment during the recording process, when you heard a song back for the first time and said: ‘Wow, this is Sanctuary in 2014!’

Lenny Rutledge: I don’t know if there was a specific time when we actually realized it. We did go into the studio without thinking too much about stuff, except for two requirements: We wanted to write really good songs and not necessarily sound modern, but have a modern production. So once we started listening back to it we felt like we were really close to achieving that, or that we’ve achieved it. We are really happy with it.

Rockpages.gr: This question goes more to Len I guess, I’m curious, during the inactive period of Sanctuary, were there times when you wrote a song or a riff and thought: ‘I wish I could send this to Warrel and see what he thinks about it, if this could be a Sanctuary song’.

Lenny Rutledge: That’s exactly what happened actually. There wasn’t a lot; there were a couple of things that I was working on: One of them was ‘The Year the Sun Died’ the song, and another one was ‘One Final Day (Sworn to Believe)’, which was the first song I sent to him. For many years I didn’t really play electric guitar, I played a lot of acoustic so I had a lot of clean acoustic ideas saved in the back of my head. I was thinking: ‘God, if Warrel and I ever got back together again, these would be perfect for him’. So that’s how it worked out. 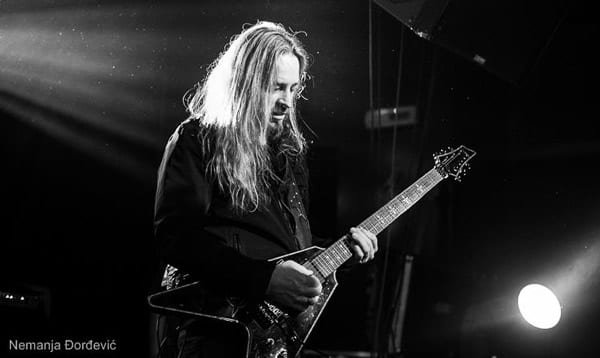 Rockpages.gr: One of the things that make me disagree with all the Nevermore comparisons is that your guitar playing is very distinct. The solo on ‘The Year the Sun Died’ is amazing since you mentioned the title track, but what is it that you look for when you write a riff? Let’s take the main riff off ‘Arise and Purify’ for example, it’s been stuck in my head since I first heard it.

Lenny Rutledge: It’s hard to say. For me, one thing is just that, if it’s catchy and stays in your head, that’s cool. That’s how songs get formed; every riff I wrote didn’t make it on the record. Warrel or Jim or Dave would be sitting around while I’m playing these ideas and somebody would point out: ‘Hey that’s a cool part, we should use that’. Or I’ll present stuff I’ve been working on to the band and it goes through an approval process. Usually if everyone gets something out of it we at least assume that we’re on the right track.

Rockpages.gr: Warrel, either with Len or Jeff Loomis you don’t have to worry about the riffs on your records being good.

Lenny Rutledge: You brought up the Nevermore comparisons, we get those a lot and I appreciate that it sounds like you don’t necessarily agree with that. I understand that people say that because Warrel was in both bands, so there will be some similarities, but I’m not really sure, I think it’s off.

Warrel Dane: Our new record is going to sound like Arch Enemy!

[Everyone laughs. The interview was done before Sanctuary announced that Nick Cordle (ex Arch Enemy) joined the band, so the guys had to fill me in]
Lenny Rutledge: There’s more to that actually. Brad Hull has left the band and Nick Cordle from Arch Enemy is now in. 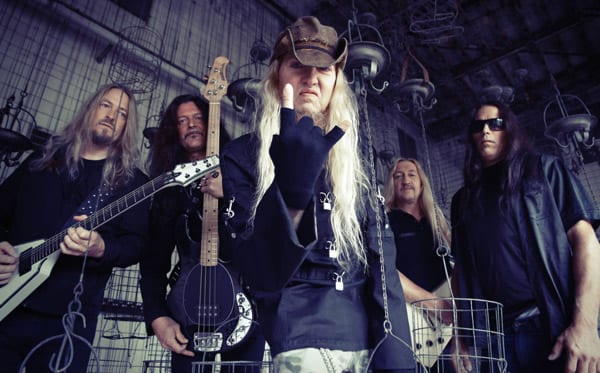 Lenny Rutledge: We’ll make the official announcement next week, but Brad had other priorities, so…

Rockpages.gr: Ok. I want to talk a little bit about the lyrics of the record. What was it Warrel, about the character of Lenore, that inspired you to write some of the lyrics around her?

Warrel Dane: I’m not really sure where the inspiration came from; of course everyone is going to think it’s because of the character of the Edgar Allan Poe story, but that’s not really it. I just envisioned this woman that was a death prophet from the future and was predicting the end of the world and I kind of wrote this little story around it. I became consumed with this character for a while; I really dove into it and made her as visual as possible. I’m happy with the way it turned out. People keep asking me questions about this person, about how she came into power. It’s great because I love it when music is inspirational and makes people think.

Rockpages.gr: Did the inception of this dystopian world precede your decision to use Lenore or was it simultaneous?

Warrel Dane: It was pretty much at the same time, yes.

Rockpages.gr: There is something about the vocabulary that you use in your lyrics that is very unique. I wanted to ask you, you did some shows in South America last year with an amazing setlist with Sanctuary songs, Nevermore songs, songs from ‘Praises to the War Machine’ which is an album that I really like. Would you consider doing a whole tour like that?

Warrel Dane: Of course, I’d love to do that. I just did a show in Israel, in Tel Aviv, doing the entire ‘Dead Heart…’ record and I’m doing that again in Brazil in April with the same band. I’m open to do that anywhere. Right now Sanctuary is my priority but I’m trying to juggle both sides.

Rockpages.gr: There’s also been talk of a new solo album with covers, any updates on that? 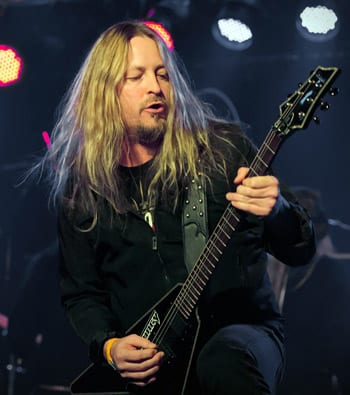 Warrel Dane: It’s going to happen; it just depends on when I’ll have the time from all the touring. It’s going to be mainly 80s goth songs, I think it’s going to come out great.

Rockpages.gr: Would you say that it’s going to come out this year?

Rockpages.gr: Is your cover of ‘Lucretia My Reflection’ an indication about the direction you’re going for?

Warrel Dane: It might be, yeah. We love that song; we even talked about doing that song on this tour.

Warrel Dane: We should do a Nevermore song too. [Jokingly]

Rockpages.gr: But you’re not going to?

Rockpages.gr: Since we talked about covers, I really like the cover you did on ‘The Obsidian Conspiracy’, the song ‘Transmission’ by the Tea Party.

Warrel Dane: No, it wasn’t ‘Transmission’.

Warrel Dane: ‘Transmission’ was the one I originally wanted to do. I’m a huge fan of The Tea Party, as is Len. I love that band to death. That guy, Jeff Martin is such a great lyricist and a great singer.

Rockpages.gr: Did you know that The Tea Party also made a comeback this year?

Warrel Dane: Yes. I heard the new record, I really like it.

Rockpages.gr: Well, you have great taste. That’s it for me; I wish you all the best for the tour.

Warrel Dane: Will we see you in Thessaloniki or Athens?

Warrel Dane: I’m really looking forward to the Thessaloniki show where Black Fate is supporting, because I love Gus Drax as a guitar player, it’s going to be awesome.

Rockpages.gr: I think the support bands for both shows are good choices. You’ll like Sacral Rage as well. 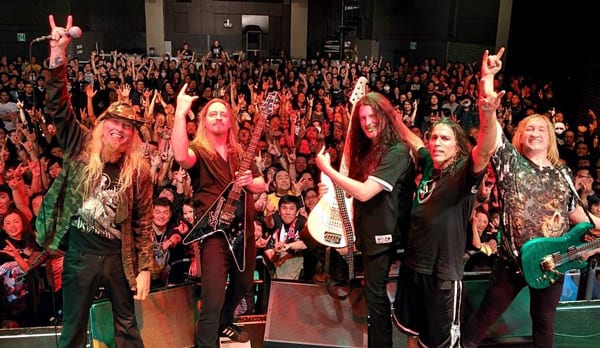