In 1974, Jon Landau checked out a show by the upcoming artist Bruce Springsteen. After the show, he went on to write a phrase that remained classic ever since: “I saw rock n’ roll future and its name is Bruce Springsteen”. This is somehow what I felt when I saw Sleazy Lizards opening for Kip Winger a while ago. No need for any parallelism or comparison with the mighty Boss but the enthusiasm and the overall performance of the band that night can easily justify any resonant characterization. Even if we are living in Greece…in 2016! 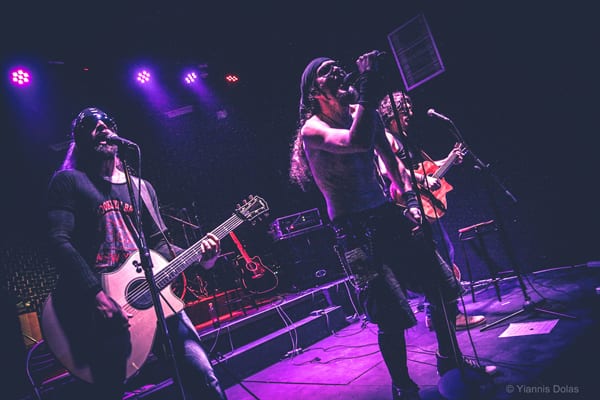 It is pretty rare to be astonished by an unknown, support act. It is even rarer for the Greek standards to experience an absolute professional approach that is accompanied by a romantic amateurism that stems from Sleazy Lizards’ passion for music. And this is exactly the differential point between this band and the vast majority of the other Greek outfits: they are both perfect musicians and flawless 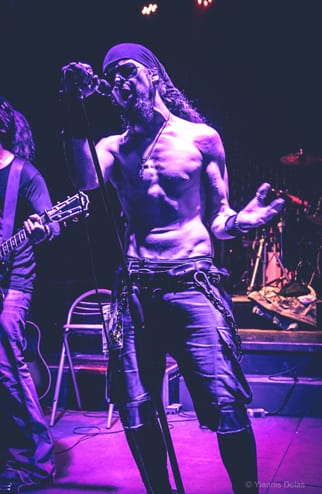 performers. They manage to combine harmonically the catchy (yet well-crafted) tunes with the entertainment factor. So, we decided to meet the guys and learn a few things more about them. If my initial impression on the night when I saw them was positive, after the meeting I was more than happy getting to know this band…hopefully, things will turn out great for them!

Sleazy Lizards is comprised of Jet Papas, Jim V. Serpent and A.d.; three friends (and schoolmates, really) that decided to form a band when they saw another school band on stage playing “Wasting Love” by Iron Maiden (Up The Irons!). Highly passionate and driven, Sleazy Lizards started learning songs by their favorite bands (for the record, “Afraid To Strangers” was the second ever song that they laid down) while slowly got on with writing original material. What really impressed me of the guys was their education in music theory as from a very young age indulged in a…hobby of theirs: learn to play as many instruments as possible! Piano, guitar, flute…you name it! It is somewhere around that time that the idea of Sleazy Lizards matured and the six-string goddess (a.k.a. guitar) stole their heart!
What makes the whole Sleazy Lizards saga more interesting is the fact that they have been around for quite some time yet it seems that only lately the guys have made their presence widely known among the masses. We asked them what they thought about the importance of the social media nowadays. “It is not only important but actually necessary”, they fired back almost unanimously. “Undoubtedly, through facebook, people got to know us really well and come to the shows”. 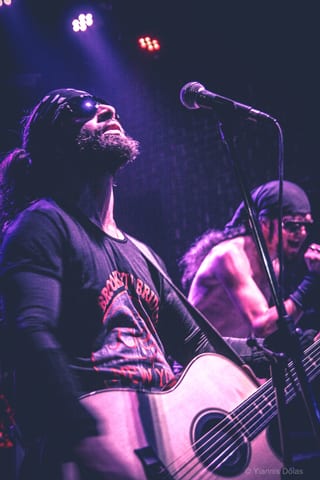 But what does it take to make a difference and stand out among all the others in a country where the buying audience and the overall demand for rock n’ roll music is minimal? Jet has an answer: “That is a very good question; the truth is that we don’t rely only on the Greek market and we make plans for other big capitals around the world”. Jim concurs and adds that New York, Los Angeles and London are top priorities. The guys are fully aware of the difficulties that a rock n’ roll band faces in Greece but they are adamant, they are persistent and confident that they will succeed because they really love music and what they are doing. And this comes for a bunch of guys with college degrees that a few years ago decided to focus on music and follow their dreams!

“Maybe it sounds strange”, Jet underlines, “but we don’t want to get tangled in the reins of the music industry…don’t get me wrong; it is a necessary evil but we don’t want to get distracted by the whole business thing. We want to remain focus on the music. After all, we have other people for that job”, he points down smiling as he shows us the band’s PR manager.

Naturally, we asked them if they’ve ever thought of doing a fully-blown electric show. They didn’t give a clear answer but judging by their mischievous smile, I’d bet my bottom dollar that they will most certainly attempt something like that in the very near future. As a closing note of our chat, we humbly recommended to them to record some of their original material and have it available in their shows as a lot of fans want to relive the experience of the show…at home! “That is also in our plans”, they say and we are already waiting for the next Sleazy Lizards show.

We touched other topics, we laughed, we exchange (war) stories and all in all we got to know Sleazy Lizards. But you know what…? In order to get the full picture of them, you have to see them live! Trust me! It doesn’t matter how many lines I will write about them or how many praising words I’ll include in my article. The one thing that matters is the band’s sheer talent on stage and its natural charisma from a compositional standpoint. As the saying goes: it’s only rock n’ roll…and Sleazy Lizards is the absolute definition of the genre! 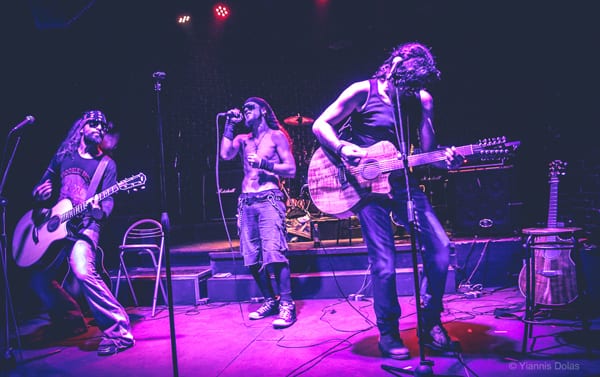