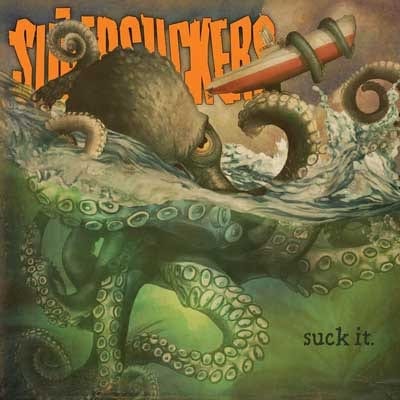 PRESS RELEASE: SOMEWHERE IN NEW JERSEY—”We’ve finally become the band that we’ve always threatened to be,” says singer-bassist Eddie Spaghetti, calling, as ever, from the road. With the Supersucker odometer clicking on three decades this very year, the self-proclaimed Greatest Rock´n` Roll Band in the World is marking the occasion with a loud, resounding Suck It. Off the blocks, this 12th studio album from the band showcases a ruthless, get-it-done trio that sounds rebuilt from Motorhead parts, with a singer-bassist transmuting Lemmy`s mojo to rasp: “You said to grab it, just hook or stab it, and now I gotta have it – all of the time.”

“Once we tapped into that vibe, we really ran with it,” Eddie says of ‘All Of The Time,’ which opens an album he and core ‘Suckers Marty Chandler (guitar) and drummer Chris Von Streicher (drums) recorded early this year at Bismeaux Studio in Austin, TX, cutting all ten tracks in four days. “And it sounds great,” says Eddie. “There’s not a lick I wish we could have back.”

As a whole, Suck It brings to mind that old friend who’s awesome to hang out with even if his life is in the shitter. “I tend to do my best work when I’m feeling good,” Eddie says. “I don’t tend to channel dark stuff into my Rock´n`Roll, but it makes for a more interesting record. I’ve come to realize what we do is not for everyone, but I still feel like we have hit songs. This one sounds like it’s coming from dudes in their 50s who’ve been doing it for a long time and have this stupid hope that someday somebody will hear our song and make it popular like it oughta be. Because that is the truth.”

Suck It will be released in Europe through SPV/Steamhammer on September 21st  2018 as CD DigiPak, LP version, download and stream.
Tracklisting: