Jackie Chambers, guitarist of Girlschool, is surely an energetic and highly motivated musician. Taking a break from the legendary band and finding the most suitable collaborators, she forms Syteria aiming to expand and discover new musical horizons. So, right here, right now (or more suitably right there and a couple of months ago) we have Jackie Chambers, Julia Vocal; the singer of the band and Keira Kenworthy on bass (the drummer and Syteria’s lucky guy are missing) and we’re talking all things Syteria  Interview: Dimitris Kazantzis 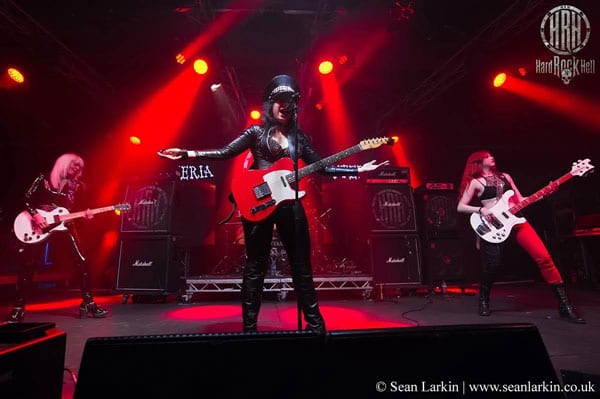 Rockpages.gr: A girl from Argentina and a successful guitarist from England met and formed a band. Tell me more about Syteria’s start.

Julia Vocal: Well, originally we met through a mutual contact in social networks…Jackie was not doing much in Girlschool and she wanted to do something new and write new music. She found me through the internet and we then went on and tracked down all the other guys. That’s how it came along really…

Rockpages.gr: Jackie, what prompted you to start a new band?

Rockpages.gr: So, is it like a new Girlschool for you?

Jackie Chambers: No…not really. I wanted to do something different. Having younger people around you on stage really helps, too. New energy, new enthusiasm…it’s something new for me and I really like it. 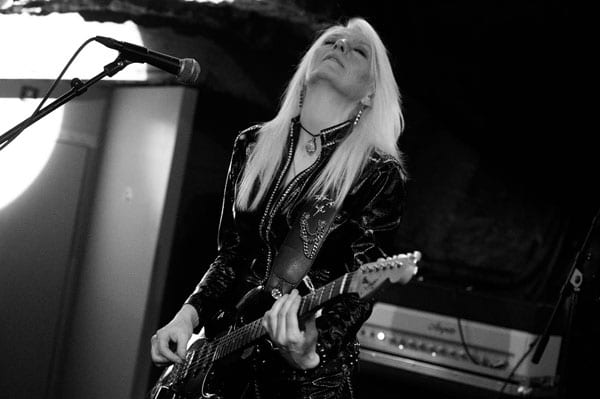 Rockpages.gr: Is there any difference performing with Syteria in comparison with Girlschool?

Jackie Chambers: Oh yeah…it’s both different and similar! Obviously the biggest difference is the fact that with Girlschool we’re playing in front of bigger audiences. But it’s also similar because I enjoy performing in both those bands.

Rockpages.gr: Julia, how is to deal with Jackie who is such an experienced musician? How does it help you?

Julia Vocal: I have learned a lot of things from Jackie…that’s for sure. From practical things of everyday life on the road to how you should act on stage and put on the best possible show for your fans. It’s amazing for me…the amount of learning and things that I’ve experienced these couple of years is really significant.

Rockpages.gr: So, we have the first studio album by Syteria called “Rant O Bot”. What does it really mean?

Julia Vocal: He or she is a cyborg…well actually is of a neutral gender. It was born or created in the rise of the revolution in a future time when all the machines are waking up and start to stand up against the big corporation.

Keira Kenworthy: Fabulous! It’s been really really good. People are genuinely happy with it and there has been a constant airplay in radio stations over here but also in America. As a matter of fact, our song “Revolution” has reached the top spot on a big network radio in USA…that’s really something for us.
It’s getting played a lot in various network radio stations…we can’t complain really; especially for a first album.

Jackie Chambers: We are always looking for a better distribution…we want to spread the word out to the people. We want to be around for a long timeand not just fade away. We have already started work on new songs for a second album…we’ll see how it goes. 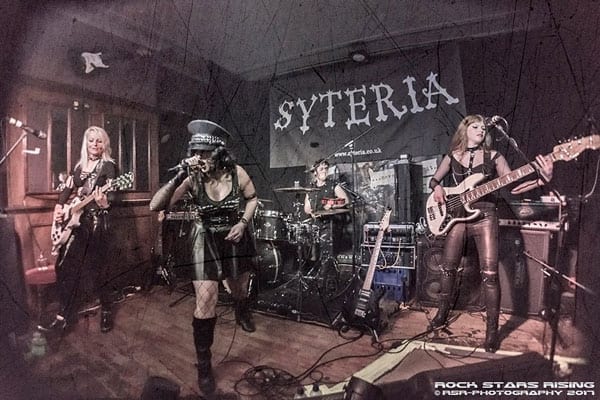 Rockpages.gr: Do you thing that this kind of rock and roll can attract the new generation? I m asking that because the music industry imposes vastly different sounds nowadays…

Jackie Chambers: Oh absolutely! I really think so. There are thousands of people here waiting to hear our rock n’ roll. So, when I hear that “rock n’ roll is dead”, that’s rubbish, right? Look at all those people out there…waiting to hear some loud rock n’ roll music. If it wasn’t for that kind of people, rock n’ roll would probably be dead but thanks to the fans, this music is still very much alive.
The same applies to all those big festivals around Europe like Wacken and Sweden Rock.

Keira Kenworthy: I think that main reason that people keep saying that stuff is because they don’t made as much money as they used to do in the past due to the bad state of the music industry. When you are a rock band you don’t expect to make millions and storm the charts. As long as there are fans out there and you are enjoying it, then that’s all that matters.

Rockpages.gr: You just started your U.K. tour, How was it and what was the feedback from the crowd?

Julia Vocal: I think it was great. People enjoyed it and I really had a great time on stage.

Keira Kenworthy: I think that she’s kinda shocked because she hasn’t played in front of such a big audience. Me and Jackie are used to it. 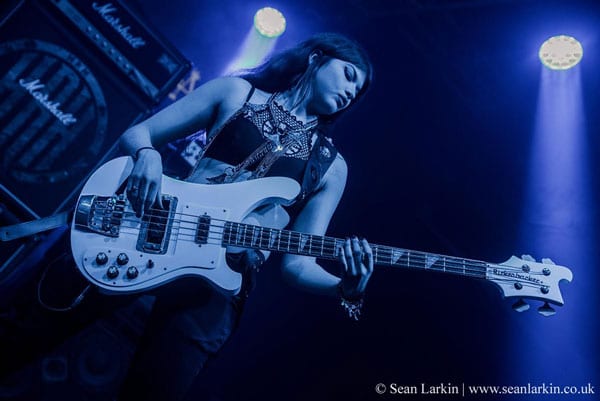 Rockpages.gr: Do you have any plan for a tour in the rest of Europe?

Jackie Chambers: We are working on it. We want to do it…we are desperate to do it. Definitely Germany and Central Europe…we’ll see. 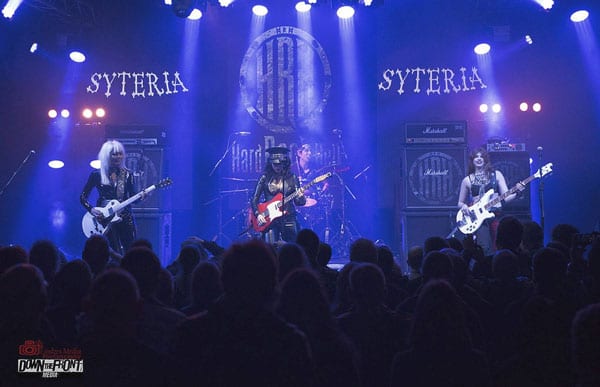