They are three young girls, from Scotland, who have made a big fuss In Great Britain lately. They have already made a new record while they are on a tour with Europe and Black Star Riders. Dimitris Kazantzis tried to call them female Motorhead and here are the results…that were also caught on tape! Camera: Yiannis Dolas, Editing/Post Production: OpenField

Rockpages.gr: What’s the feedback you are receiving so far on your tour with Europe and the Black Star Riders?

Hannah: The feedback has been great so far, and yeah we’ve had such an early stage time, but so far we had a really good crowd, that’s been really buzzy, making an appointment at the merch store afterwards,  and we’ve met some people and heard some good words from those who enjoyed our show. So, the feedback has been very good so far, yeah!

Rockpages.gr: Do you think this experience will help the band for the future?

Heather: Yeah, I think so! This is our first proper tour, so are just getting the swing of it now. We are getting used to playing to bigger audiences, having to make the crowd work because we are on first, and it’s really early. It’s been a really good practice for our stage craft… 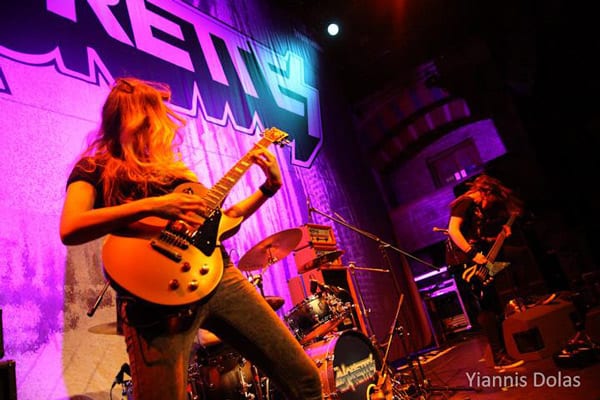 Rockpages.gr: Some people say that these rock’n’roll girls are the new Girlschool, or some others compare you with Motorhead. How does this sound to you?

Gil: We’ve had a lot of different reactions, we’ve read a review a couple of days ago which said that we were like KISS, and another one said that it was like Motley Crue… We get quite a lot of different sort of comparisons, so I think it’s good to have so many because you’ve got your own sort of sound, but with all those influences people kind of hear what they like, so that’s quite well. We’ve been called metal, punk, rock. It’s quite good to be diverse as we are working on getting our sound.

Rockpages.gr: You are three young girls who play old school rock’n’roll music. What are your influences?

Gil: Classic rock I think! Genuinely, your Zeppelins, your Priests, your DC’s we are all grew up on that kind of diet of rock’n’roll… of pure rock’n’roll! But, at the same time we listen to new music as well, and also punk, ‘80s electro we like all sorts of music, but I think that it’s mainly the classic rock that we grew up on, loved and worshipped and tried to emulate… 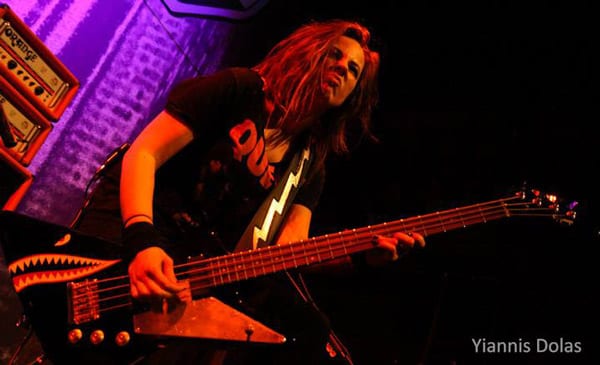 Rockpages.gr: What are your plans after the release of your new album?

Heather: Just playin’, playin’ as much as possible introducing the album to everyone. Getting further afield into Europe. We’ve got a few gigs in the Netherlands, and then France, and then Belgium, so we are doing some more of that. And hopefully we’ll start to work on some new material and a new stage show… towards stuff like that.

Rockpages.gr: Your album will be released by the end of this month. Tell us a few things about it…

Hannah: We recorded the album on the end of last year with Chris Tsangarides who’s done you know “Painkiller” by Judas Priest, Girlschool, Rock Goddess, Gary Moore, Thin Lizzy, and it’s kind of similar to our first album. We’ve kind of moved a little bit… it’s a bit more heavy in some spots. We just tried to expand our…

Gil: it’s quit brutal, angry and quite punchy, that’s because we’ve got such titles as “Shoot From The Hip”, “Son Of A Gun”, “Bull By The Horns”… it’s quite… we wanted to give it a bit more of a kick! More energy!