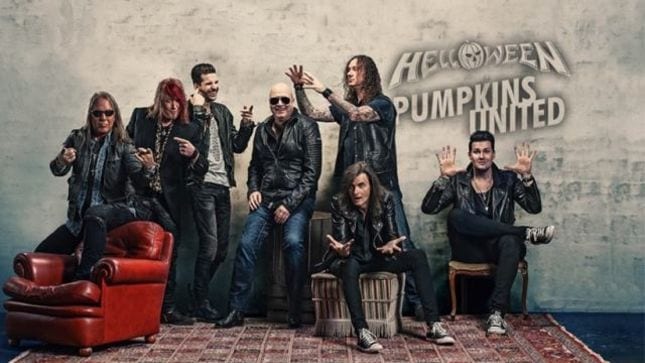 Veteran Japanese rock journalist Masa Itoh recently conducted an interview with vocalist Michael Kiske and guitarists Kai Hansen and Michael Weikath of German power metal legends HELLOWEEN about the band’s current “Pumpkins United” tour, which also features current vocalist Andi Deris, guitarist Sascha Gerstner, bassist Markus Grosskopf and drummer Dani Löble.
On putting the twin “Keeper Of The Seven Keys” albums together:
Michael Kiske: “I think they have a certain spirit. I think, how I remember that time — you probably have a different view, but how I experienced it is, we were fearless, just fooling around, working with the elements of the bands we were excited about, fooling around with it. I think the creative spirit that was going on by that time is captured on the record somehow and you can feel it. It’s stuff you can’t artificially produce. It’s there or not. It was definitely there in those days.”
Michael Weikath: “This is nothing against Deris because he has his own magic, but it’s his voice [Kiske’s] on the ‘Keeper’ records. I heard the UNISONIC [Kiske and Hansen’s now-dormant side project], the last one you’ve done and there were some tracks that sounded close to HELLOWEEN. I heard the producer, he was studying what we were doing and putting things together to create something similar. And there it was. I put in on and I was like ‘Godly sunshine going with choirs.’ It was his voice. I was like ‘Yeah, that’s it.'”