Witchfynde are about to play their second ever show in Greece and we couldn’t miss the chance to sit down and talk with founding members Gra Scoresby and Montalo about the past and the future plans of this legendary band. Their recollections of those early (and more innocent) days are surely something to be cherished by all the metal fans out there while the stories and the mishaps with the record labels (let alone the power failure right before an interview with Tommy Vance) will definitely take you back in time… Interview: Sakis Nikas 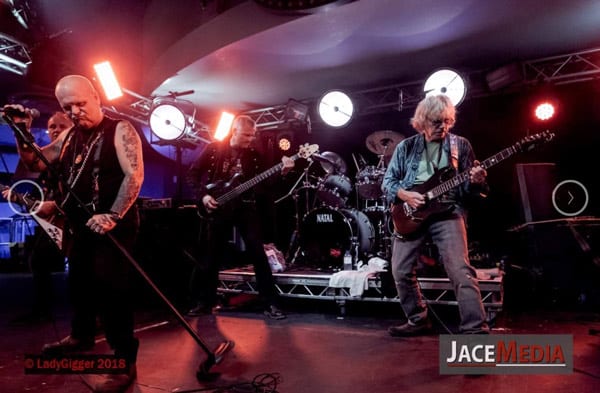 Rockpages.gr: First of all…Gra, is everything OK? We were worried with your accident and then we saw the press release by Metal Nation about the accident in the ancient forest. Pretty mystical, if you ask me (laughs)!

Gra Scoresby: Well, yeah…Jess (Cox) is on drugs (laughs)! I broke my hip on Christmas Eve. I fell off a cliff but now I’m OK. I was in the woods but it was 9:45 in the morning…something like that. I was having a great time and then all of a sudden, I fell! The next thing I remember is a guy, my size…ex-marine…carrying me down from the cliff. So, I spent Christmas in the hospital. It took me 12 weeks to get back on track…I am not running, though (laughs).

Rockpages.gr: Let’s talk about what’s going on with Witchfynde nowadays. Lots of fans are wondering if we will hear new music anytime soon…

Montalo: We would like to. The thing is that we are doing a few shows and we can’t seem to find the space of time to work on some new material. Hopefully after the show in Sweden in early June, we will concentrate on new music.

Rockpages.gr: “Play It To Death” was released more than a decade ago. How do you feel about this album? Do you think that it is a worthy addition to the band’s very good back catalogue?

Montalo: I think most of our material lasts the test of time. Take, for instance, “Give ‘em Hell”…it still sounds great, the production is pretty basic and raw which we really like it that way 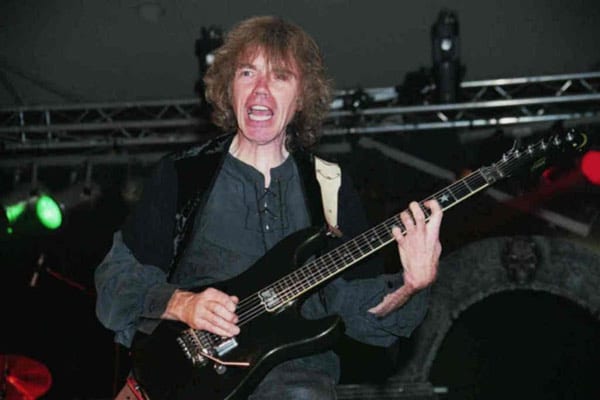 Rockpages.gr: “Give em hell” is rightfully considered a classic NWOBHM record. Would you like to take us back in time and describe to us the whole recording experience?

Gra Scoresby: Well, back then there wasn’t New Wave of British Heavy Metal…I mean the term wasn’t there. We were playing heavy rock in the back of the punk movement, really. Prior to that, prior to the punk movement we had done a few demos, sent them to almost every major record company and got turned down by them. Then punk came with the “Do It Yourself” mentality and we started putting out self-financed singles. That was really how Def Leppard did their first EP and so we went along with that type of approach. Initially, all we wanted was to sell the “Give ‘em Hell” single at our gigs but we signed with a small label and we stuck with them really. At the same time lots of bands started doing the same thing and the music press, particularly Sounds, and a gentleman called Geoff Barton came up with the name NWOBHM. We short of got swiped in that movement.

Rockpages.gr: Well you are an integral part of that movement.

Gra Scoresby: Totally. We were there right from the beginning. There were other bands of course, similar to us but they were London-based. It was even more difficult for us because London was the place where every band was taken seriously. Angel Witch, Iron Maiden, Saxon…lots of bands. Those bands got the recognition that they deserved.

Rockpages.gr: From both fans and the major labels. 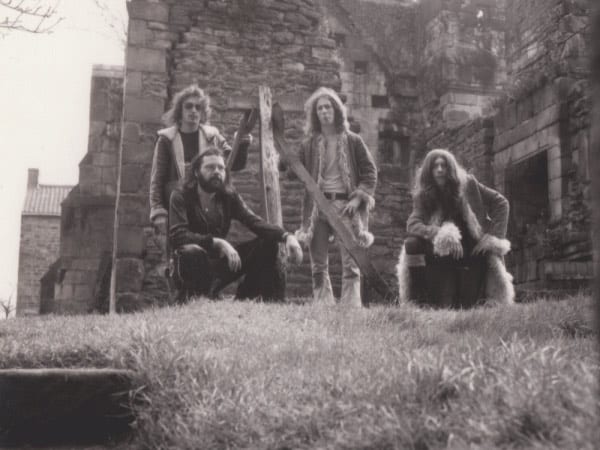 Rockpages.gr: Of course, there were some exceptions…like Def Leppard who were from Sheffield.

Gra Scoresby: We were with them in the beginning. Actually we played together on their first tour.

Rockpages.gr: How was that tour?

Gra Scoresby: It was fantastic…yeah, brilliant. Obviously they went on to greater success. Parallel to that first Def Leppard tour we did our own tour in 1980 for the “Give ‘em Hell” record.

Rockpages.gr: How was the vibe? Did you think that you had something special in your hands with “Give ‘em Hell”?

Gra Scoresby: Yes, we did. Like I said, we were on a small label and we were hold back actually.

Rockpages.gr: It seemed that there was some kind of curse with Witchfynde and the record labels. Bankruptcy was not something rare for the band as it happened with “Lords of Sin” and “Stagefright”.

Gra Scoresby: You are right. People were saying that we were really good and something special will eventually come our way but it never did…at least from a major record label that is. You could also feel it in the air, in the gigs. People were really looking forward to seeing us. 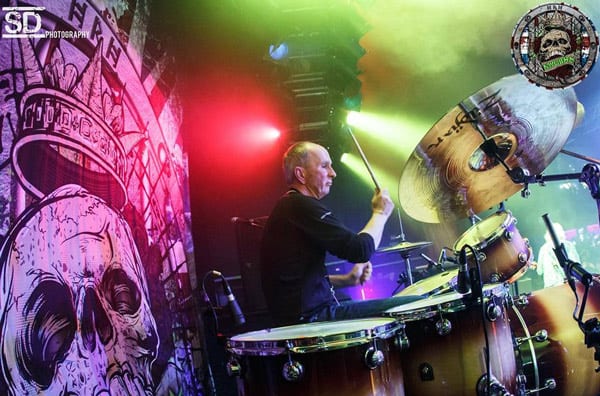 Rockpages.gr: “Stagefright” was more experimental compared to “Give Em Hell”. Why did you try and change a little bit your sound?

Montalo: That’s the exact word…experimental. We were already started experimenting in the studio with different sounds and stuff like that. But at the same time, the same classic Witchfynde feeling is still there on “Stagefright”. “Moon Magic” is a classic Witchfynde song and it’s on that album.

Rockpages.gr: Speaking of Witchfynde albums, do you have a favorite one? I would go probably with “Give ‘em Hell”.

Gra Scoresby: Probably “Lords of Sin”. We spent so much time on that record… 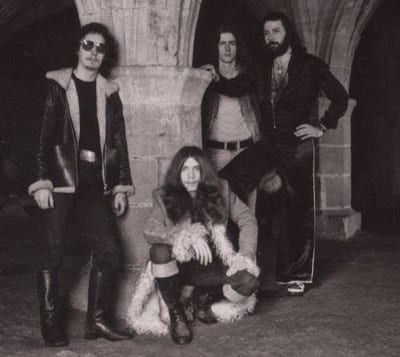 Gra Scoresby: Right. We spent masses of time on that album to get everything right thinking that this would be the critical Witchfynde album. And then again Mausoleum Records went bankrupt.

Montalo: Actually, they went bankrupt on the same day of our album release!

Rockpages.gr: That was the reason that Witchfynde called it quits…?

Montalo: We never made that decision. I guess the only way that we thought was appropriate at the time was to produce another album. But we were so drained by all those things that had happened to us that we sort of drifted away really.

Rockpages.gr: The one thing that I always admired about you is the fact that you never went along with any trend and remained true to your sound. Was there ever any thought of becoming more commercial –especially in the mid-80s- like so many other NWOBHM bands did back then?

Montalo: Not really. We always wanted that raw sound that was evident right from the start.

Montalo: Another interesting fact was that in the intervening years, when we weren’t active or writing songs, the internet happened. After a while, lots of people were talking about Witchfynde and our old records. One of the biggest bands on the planet, Metallica, was praising us. James Hetfield and Lars Ulrich always mentioned Witchfynde among their influences. Obviously all the Metallica fans and not only wanted to know more about Witchfynde. So, we started thinking seriously of getting back together without having any delusions of achieving huge success or something. We just wanted to see how this whole thing will work out and if Witchfynde would be relevant in the current music scene.

Rockpages.gr: Actually I think that Witchfynde is more relevant these days than…let’s say 20 years ago. There is the New Wave of Traditional Heavy Metal with all those bands citing Witchfynde as their influence.

Gra Scoresby: Really? That’s good to hear. It’s also bizarre (laughs)! We met a young fan last night…he wasn’t more than 17-18 years old and he said to us that he learned to play bass from the “Give ‘em Hell” record! When I said to him: “how old are you?”, he said: “I was born in 1991” (laughs)! He wasn’t even born when Witchfynde was around…why would he listen to us and not some modern band or something?

Rockpages.gr: Because great music is timeless. 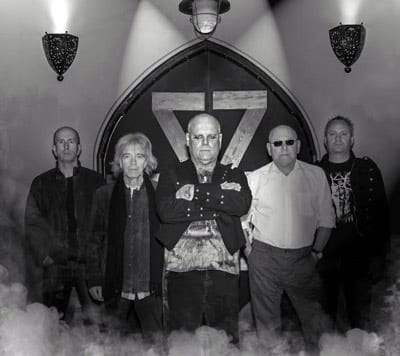 Gra Scoresby: Exactly. In the UK, it’s not the same though. There are so many new bands out there and the fans, at least most of them, are not really interested in the old stuff.

Rockpages.gr: In almost every interview that I have done through the years with English bands of the late 70s and early 80s, they refer sometimes to Tommy Vance’s Friday Rock Show. How important was for Witchfynde this radio show and how important was for the youth of England back then?

Gra Scoresby: It was very important and it helped our career. Here’s an interesting incident. We were playing a show and we were about to do an interview with Tommy Vance…after the concert we went to our dressing room so as to do the interview. But we couldn’t listen to it. When the Tommy Vance show went on air, the whole power in the club went out! True story! So, we couldn’t listen to Tommy who was left saying: “Witchfynde, where are you?” (laughs).

Rockpages.gr: Last question, I will say a band’s name and you will say the first word that come to your mind. Easy, right? Let’s start…Iron Maiden. 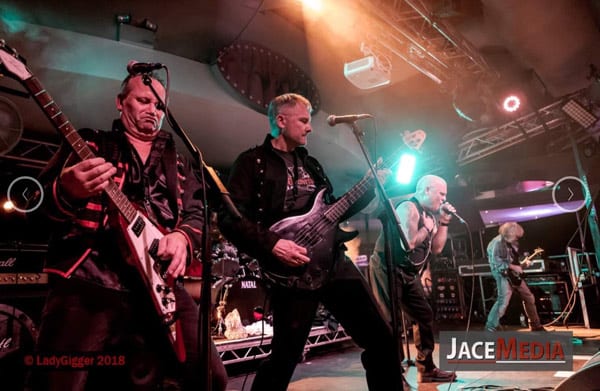