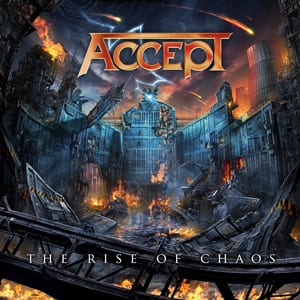 Fourth Accept album with Mark Tornillo and unfortunately is the worst of them all!

The band follows the successful recipe as in the previous three with great production, powerful riffs and Mark’s trademark raspy vocals… but, what lacks is the quality in the songs, which is by far lower than on the previous ones. If “Rise Of Chaos” had to be compared with one of the three that would be “Staligrad” which still had the amazing “Shadow Soldiers” and the self0titled song, something that doesn’t happen on “The Rise Of Chaos”.

Maybe Accept rushed to release another album and fell on the trap of repetition by themselves. Repeating yourself is not crime, because in Accept’s case you are not expecting to listen to anything but teutonic heavy metal, but our expectations are not meet. It’s very difficult to remember any songs of the album after the first spins and that says it all.

Unfortunatelly, my fears of mediocrity that arose when the self-titled song and “Koolaid” were released as the album’s first singles proved right. The only song that managed to stand out from the rest was “Worlds Colliding”  and that was about it. Another example of the lack inspiration is the cliché “Analogue Man” with the lyric “I’m and analogue man in a digital world” with the hilarious bridge “Update, download”… in all fairness only Tobbias Sammet could handle this!