I’m writing these lines while trying to get my head and thoughts together. It’s not easy at all. This is a show that will probably never be forgotten. 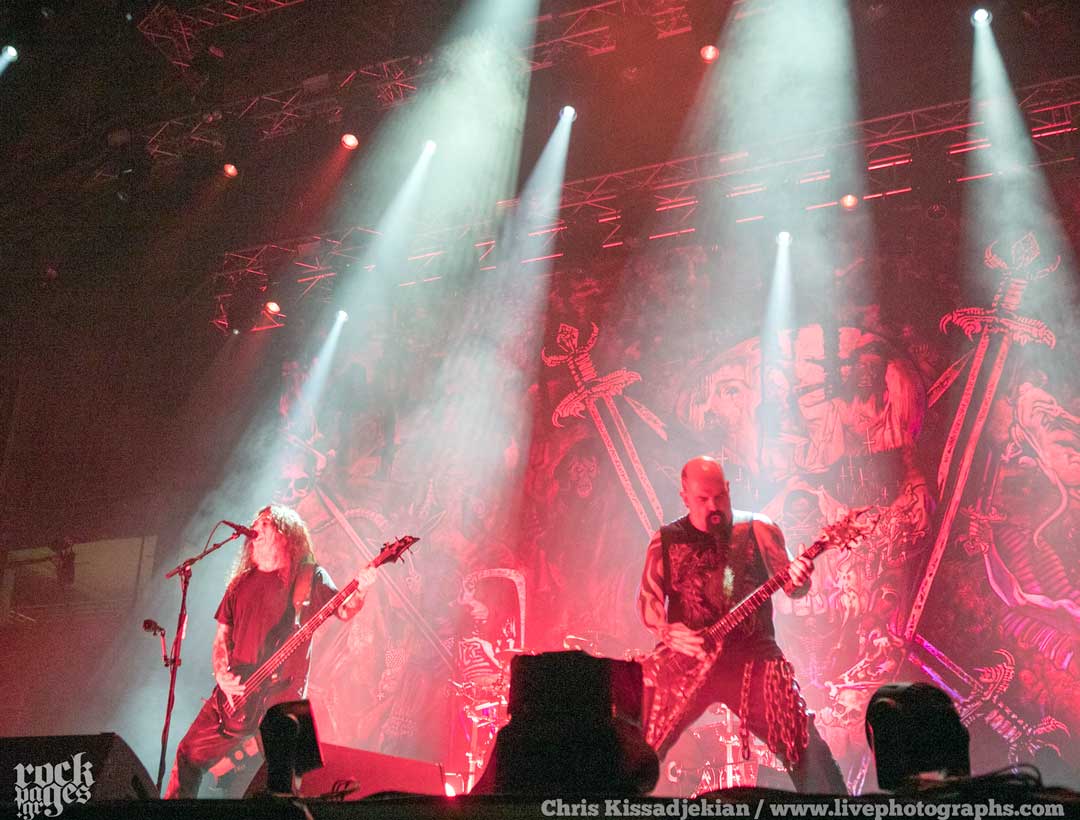 Let’s star from the promoters. It was a very bad timing when they announced the change of venue a few days before the show. In my opinion, a closed arena with air conditioning and proper ventilation is way better than an open arena in the middle of summer. Many stood against this change, but it turned out to be a success.

First band on stage was Suicidal Angels. They started the attack with “Apokathilosis”. They were in great mood and had plenty of space to move around, so they did what they know better. To give people quality thrash metal. Their fans started moshing from the first riff and didn’t stop at all, showing clearly how they like them. As a result of course, the band dedicated the song “Moshing Crew” to them to show their appreciation. During their set, they played also two new songs (that are already released on YouTube), “Born Of Hate” and “Endless War”, showing that their upcoming seventh full-length album, “Years Of Aggression”, will be a killer one. No surprises there, I didn’t expect anything less from them. Great band, strong performance, I can’t think of a better appetizer for what was about to follow. 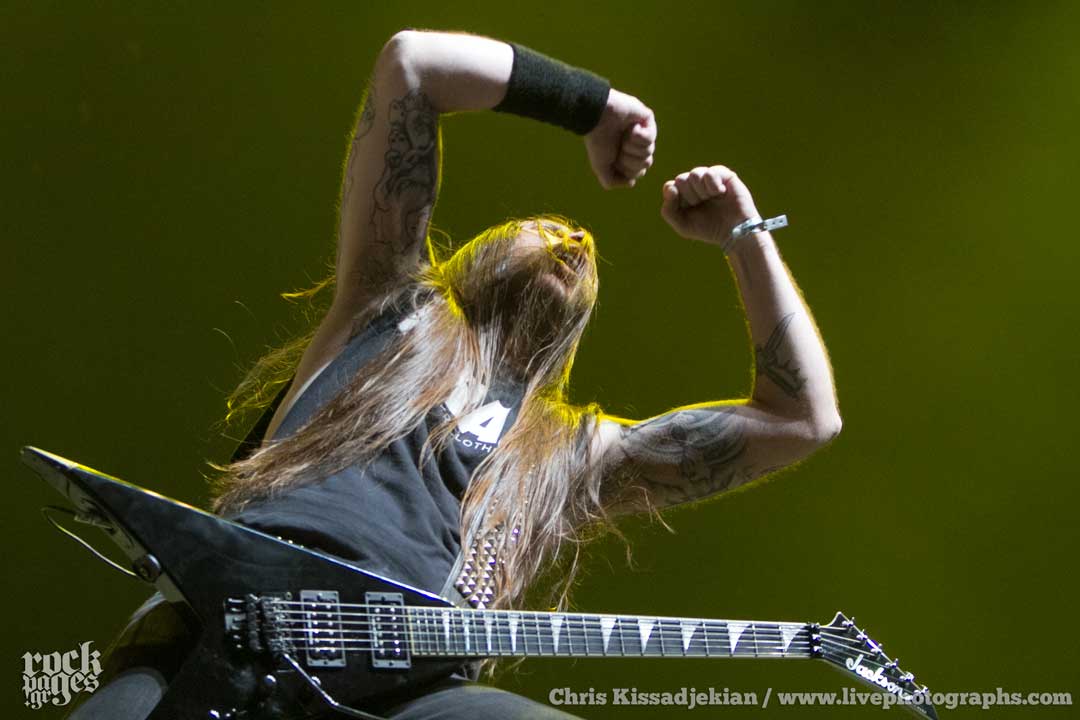 Leprous was for many the band that didn’t belong to this line-up and you can’t blame them for that. Of course, the guys from Norway have done huge steps forward the last years, they are considered one of the most important acts of the modern progressive sound and the fact that nine current and ex members of them are or have been in the live band of Ihsahn, shows a lot about their quality. Their performance was perfect, but the reactions of the crowd were from mild to zero. Some were chatting, others were playing with their phones while but also there were those who were concentrated on watching their show. It was clear that were completely different from the rest of the billing, but this is not bad. One thing is for sure, they gained some new fans.

Setlist: Bonneville, Stuck, The Flood, From The Flame, The Valley, Illuminate, The Price, Mirage, Third Law 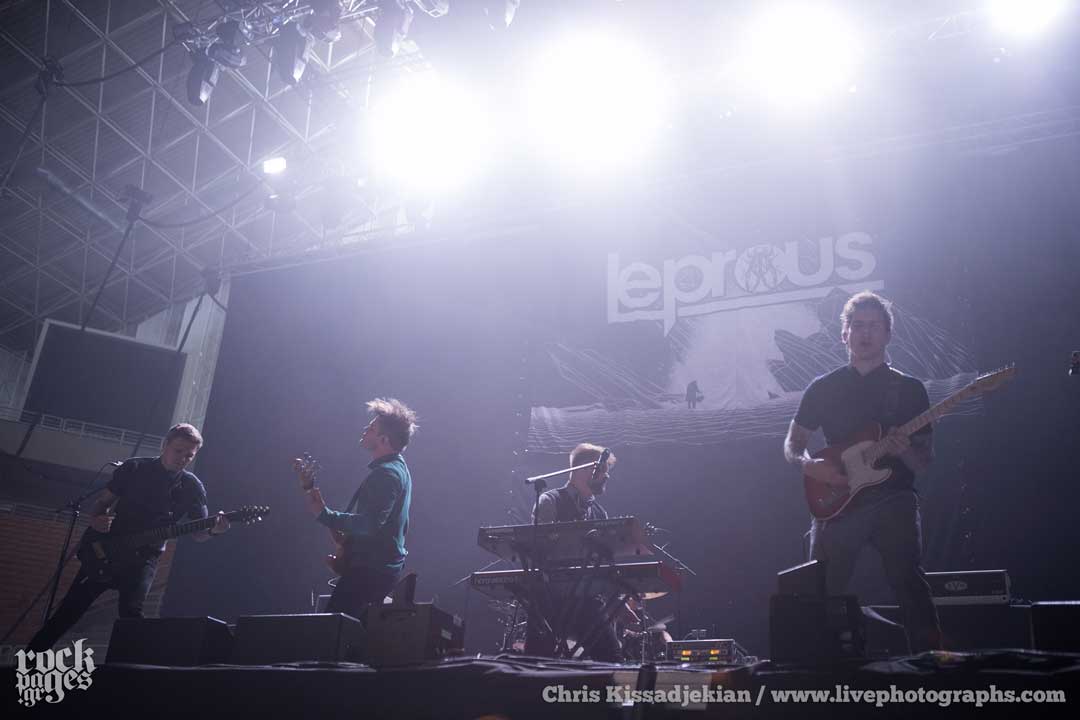 As for Rotting Christ, this was for me the second show in a week after Chania Rock Festival. No problem at all, I could watch them every week without ever getting bored. Their performance was in the usual high standards with the fans participating in almost all the songs, even if some of them are not the best for a live show. There are many who criticize the band’s direction in their latest albums, but I saw most of the audience to react very well and follow every command of their frontman, Sakis. Especially the fastest songs were accompanied with screams and mosh-pits. The atmosphere in classic hymns like “King Of A Stellar War” and “Non Serviam” was amazing. Great performance that involved smoke and fire machines. In the end, they thanked us and said “let’s enjoy Slayer”. 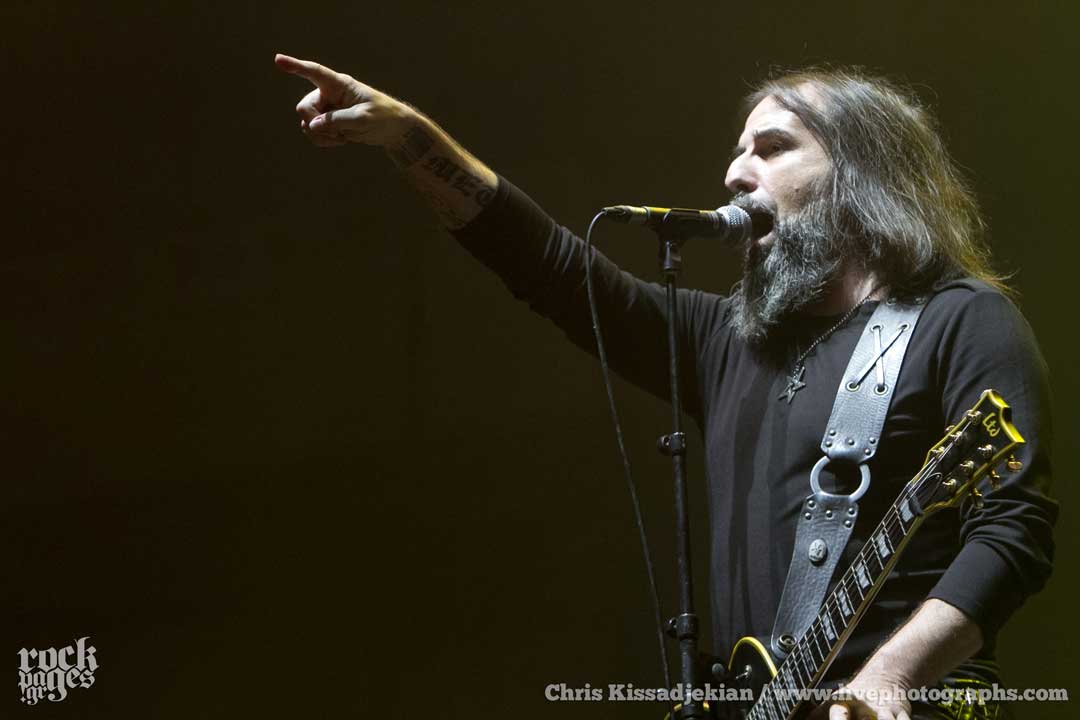 And we sure did enjoy them. Before starting my delirium, I should say that the sound in all the bands was from very good to perfect from where I was standing. And I say that having changed four different spots during this night. Let’s move on. The lights go out. The intro kicks in. On a giant curtain in front of the stage, three crosses are projected that go inverted in the end. After that, the classic logo with the swords appears four times and moves around until a huge SLAYER stays in front and causes paroxysm among the fans. The curtain falls and “Repentless” is the first one to cause panic. What followed, cannot be easily described. Slayer destroyed everything. Without wasting time, the played one song after another. “Evil Has No Boundaries”, chaos. Some minutes after, the iconic opening riff of “Postmortem”. Goodnight ladies and gentlemen and we are just in the first four songs of the set. The pause came after a while, with Araya asking us to shout all together “waaaaaaaaar”. You can easily understand what followed. Very pleasant surprise was “Gemini”, even if its mid-tempo tone calmed down a bit the audience. 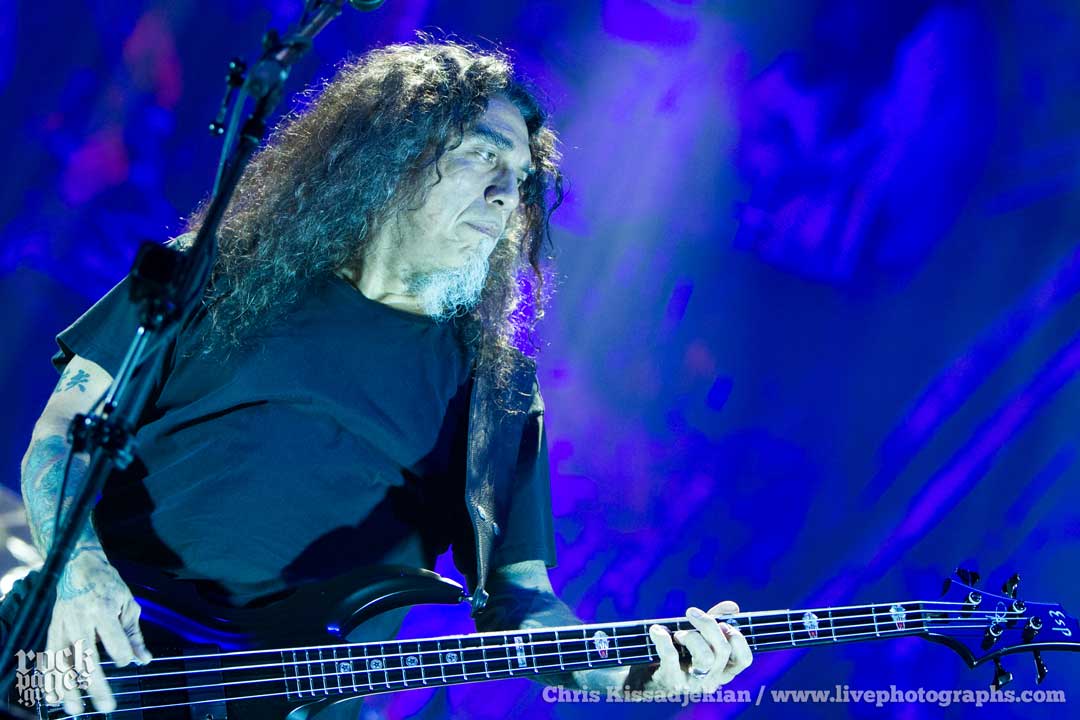 After that, Slayer continued spreading thrash metal chaos. The fans never stopped moshing. At some point I felt a bit sorry for Bostaph, who was playing like a beast and had fire machines right and left of him that were used in almost every song. And when you feel the heat up to the end of the arena, I can’t imagine how the band would feel up there. In “Hell Awaits” three flares were lit from the fans (good job from the security, right?) and thankfully nothing happened. Before realizing what hit us, there goes the riff of “South Of Heaven”. It is probably the most ominous riff in the metal history, even to this day it sends chills down my spine. The fans scream together with Araya “on and on south of heaven” and suddenly, the most menacing drum beating ever leads to “Raining Blood”. Panic. After that, the riff of “Black Magic”. Come on guys, show a little mercy on us, we can’t take much more. The last one was the eternal “Angel Of Death” that led the audience to glorify this band for many minutes after. Araya thanked every member of their crew by name, as this was the last show of this leg of their final tour. But what came next, brought tears in our eyes. The rest of them left the stage and Araya is alone. He just looks at us filled with emotion. The fans shout in rhythm his and the band’s name. He stands there for ten minutes. In the end, he picks up a piece of paper from the drum kit, thanks us and says that he will miss us in Greek. 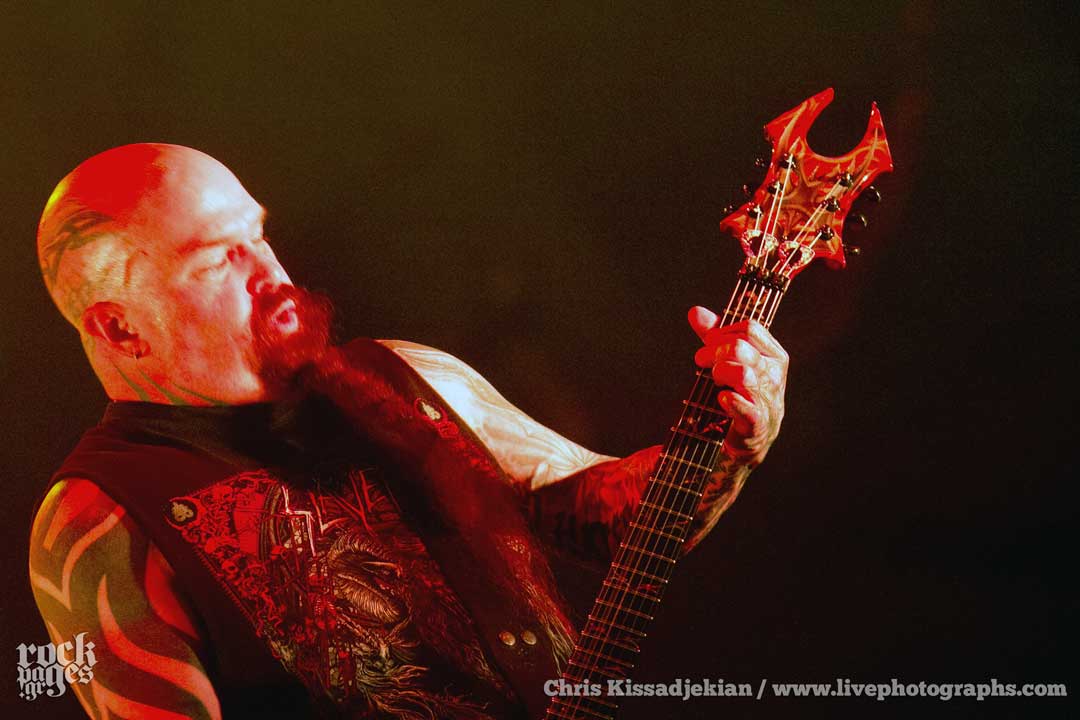 Before that show, I’ve seen Slayer the last three of the five times that they visited our country. That was the best by far. For many, it was better than the first ones in 1996 and 1998. And it wasn’t because of the fires, the smoke machines and the impressive light show or because this was their last performance. It was because they played twenty songs like rabid dogs, without a single mistake. Bostaph was amazing. Holt and King played like there was no tomorrow, despite the stupidity of some people who say that they aren’t good guitar players. Araya was larger than life. The voice that spilled hatred and rage like no other in the history of this music. Slayer came, saw and pulverized everything. To rephrase a well-known saying of Voltaire, if Slayer did not exist it would be necessary to invent them. For you who didn’t show up because of the venue, I’m sorry. You missed the best concert of the year and one of the best ever in our country. Slayer isn’t just a big thrash metal band. SLAYER IS THRASH METAL. 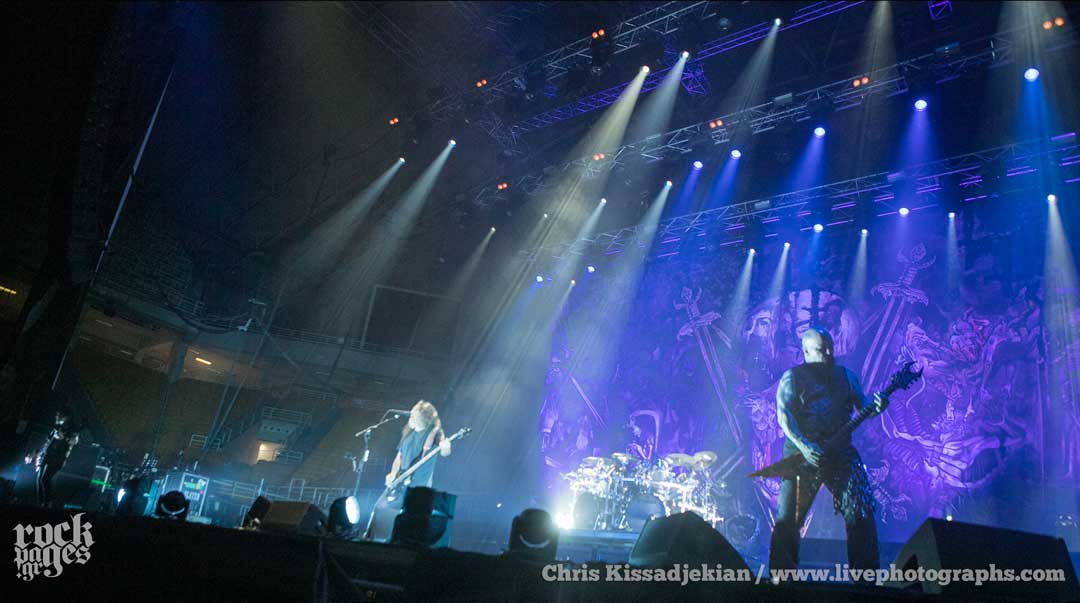