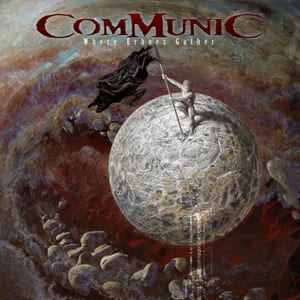 Communic is quite a misunderstood band. They had the bad luck to be characterized as a Nevermore rip-off from the start of their career. Maybe for this reason, and even they always had great music, they didn’t manage to achieve a greater status. The truth is that they have common ground with Nevermore, especially in their debut album, but not so many to be considered a rip-off. The biggest similarity is in the voice of Oddleif Stensland that reminds us of Warrel Dane.

The Norwegians managed to create their own sound and finally their fifth album is here, six years after the darker “The Bottom Deep”. I don’t know if this absence helped them in any way, but “Where Echoes Gather” is by far their best release so far. High quality progressive power metal, without unnecessary parts, without meaningless technique, without stretching the songs until death from boredom, without in general trying to show how good musicians they are. All the things that I despise in the progressive field. Only good songwriting with no weak parts in them. Oddleif did an excellent job with the riffs, the guitar melodies, the lyrics and the production of the album.

After listening to it many times I have to say that all this waiting was worth it, because I didn’t expect it to be that good. This album comes with three bonus songs, all of them from the fantastic “Waves Of Visual Decay”. Two of them from new studio recordings and one from an acoustic live performance, to celebrate last year’s ten-year anniversary since its release. Communic continue not to disappoint and the only thing that remains is to finally achieve the status that they deserve.