Dexter Ward is already on its 6th year in the musical forefront having released a full length studio album, an EP and quite recently a split album with Black Soul Horde. We track down the band’s founding member and guitarist, Manolis Karazeris, who was more than happy to share some of the most interesting details about the past, present and future of Dexter Ward. Narurally, the conversation took a slight turn on the upcoming Up The Hammers Festival as Manolis is the promoter of the prestigious Greek festival. Interview: Sakis Nikas / Camera: Yannis Dolas

Rockpages.gr: Manolis, tell us how did the band start?
Manolis Karazeris: Dexter Ward was born after my departure from Battleroar…there was a time when I didn’t do anything really but when Marco (Concoreggi) left, also, Battleroar we decided to form a new band that will be comprised of members that above all will be friends and in the same thinking wavelength. We would have fun and nothing less than that. So we got in touch with some people that we have played with in the past and we had a really good time. After all, being a heavy metal musician in Greece doesn’t pay any bills so I guess that having fun should always be the guideline for every new endeavor. So, Dexter Ward was born due to the fact that Marco and I wanted to play music and with that in mind we managed to recruit the rest of the guys.

Rockpages.gr: Who’s the avid Lovecraft reader in the band…? Who thought of the band name?

Manolis Karazeris: Marco is the guy that came up with the name. He reads a lot of books and Lovecraft is one of his favorite authors. 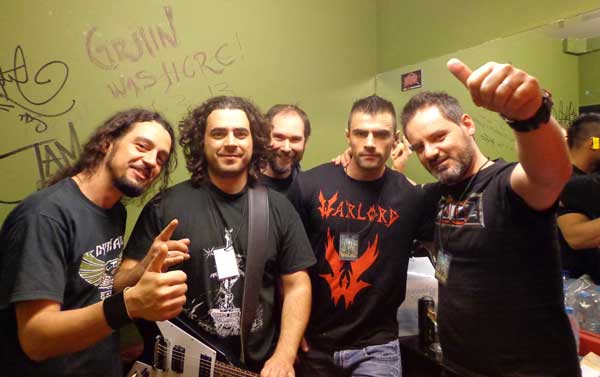 Rockpages.gr: You said that you formed Dexter Ward after you left Battleroar. How hard or easy was this decision for you?

Manolis Karazeris: It was the most difficult decision in my life up to that point because I absolutely adore Battleroar..more than my life really. I was emotionally attached with Battleroar but it was something that I had to do for my own sake. And trust that wasn’t an easy decision as I had been thinking about it for a long time before its realization.

Rockpages.gr: Would you like to elaborate more on this?

Manolis Karazeris: No, not really.

Rockpages.gr: The first promo CD by Dexter Ward included 2 songs and it was extremely limited…I believe that there were only 100 copies available. Is there any chance of reissuing this promo CD in the future?

Manolis Karazeris: No, I don’t think that it has any interest anymore. It was simply a promo CD that was only available the first time that we played at the Up The Hammers Festival and it was actually immediately sold out in that day. So, those who purchased it back then are the lucky ones. Howvere, the songs were later used in the “Antarctic Dream” EP and that aforementioned promo CD has now only a collectible value.

Rockpages.gr: “Neon Lights” is an excellent sample of US heavy metal sound. Why is that genre so beloved to you?

Manolis Karazeris: The album is really a mix of Judas Priest and Iron Maiden; bands that we grew up with. We didn’t set out to play like this but it came out quite naturally for us. Maybe this time around we focused more on our heavy side than the epic side that was so predominant in Battleroar. After all, most of the songs in Dexter Ward had little in common with Battleroar…as a matter of fact some of them were written during my Battleroar days.

Rockpages.gr: Are you satisfied from the production of the album?

Manolis Karazeris: No, not at all! I will always regret that we didn’t have a better production as it didn’t do justice to the songs. Looking back now and given the fact that I don’t want to overpay for the recordings of an album and the band to try to find the financial recourses for that purpose, we did the best with what we had available back them. The truth is that we should have invested more money and bring forth a better produced album.

Rockpages.gr: Was it something that you discovered as you were recording the album or did you realize it after its completion?

Manolis Karazeris: No, I realized it at the end of the sessions. If I had known it before that, I would definitely scrap those sessions and start all over again. But you see…it’s the enthusiasm of the musician that gets in the way and blocks the real picture. For instance, one big mistake was that we didn’t use real drums on the album. We tried to experiment with various things but the result was not what we hoped for. I am not being judgmental but I truly believe that the album deserved more. With the new split album with Black Soul Horde we have done a new remix on three songs and the result is evidently improved. This was the real goal of this split album…something to provide a better sound for those much beloved songs of our. But I would love to re-record this album in the future. 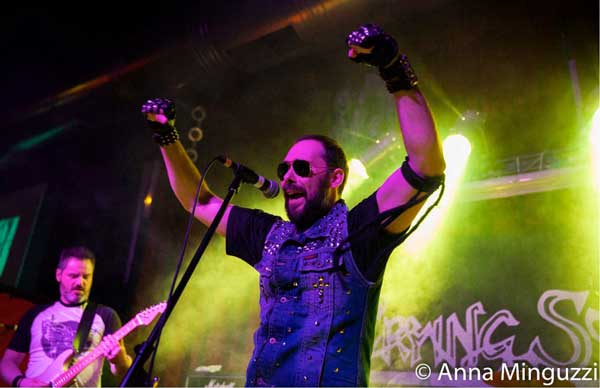 Rockpages.gr: Is there any chance of releasing in CD format the split album with Black Soul Horde?

Manolis Karazeris: No, it’s an one-off deal. We have a good relationship with the guys at No Remorse Records and when they asked us to come up with something new, we didn’t have any problem whatsoever. We had already available a new song, “Rendezvous With Destiny” (that we had performed it live in the past) and we added three remixed songs…I believe it is a well-balanced effort.

Rockpages.gr: Is it top priority for you to re-record “Neon Lights”?

Manolis Karazeris: No, this won’t happen anytime soon…maybe, in the far future for our own pleasure. I wish I would track down all those who have bought “Neon Lights” and give them for free the rerecorded version! But as for now, I am already working on the second Dexter Ward album which I believe is my best effort so far. I am certain that everybody will be enthused and will love the new songs. The new album will combine elements of the first album with some epic traces here and there that will remind you of Manowar (“Sign of the Hammer” era).

Manolis Karazeris: We want to have it out a few days before our appearance at the Keep It True Festival or even at the day of the show.

Rockpages.gr: Is there a fine and distinctive line between being a fan of music and a musician?

Manolis Karazeris: Most of the times, I play the role of the fan in the band. I am trying to be the fan and with that in mind I help us much as I can in the final selection of the songs. It’s not like we are writing 10 songs and all of them end up on the album. We pick up the best ones and please bear in mind that Marco is a prolific composer and he may come up with 2-3 songs per week!

Rockpages.gr: Dexter Ward belongs to the Underground Metal scene as the majority of the local bands here in Greece. Do you think that there is any chance for the traditional heavy metal bands of breaking the boundaries and becoming more mainstream and accessible to a bigger audience?

Manolis Karazeris: No! The reason is quite simple: for instance, Dexter Ward is comprised of 5 members that have their own families and don’t have the luxury of leaving everything behind them and embarking on a big tour. If you can’t play in the big European festivals then you don’t have much chance of establishing a bigger career. It’s not something that I regret as we all know our limitations and with that in mind we carry on. Having said that, there are many thrash bands here in Greece that are actually really good and the fans seem to really enjoy their show. There is a resurgence of that genre and a unity between the fans and the bands. You don’t see that in the traditional heavy metal genre. Maybe it is a trend…who knows? The fact is that this situation is quite encouraging for those thrash metal bands and I couldn’t be happier for them although I must say that I am not a fan of thrash metal music. 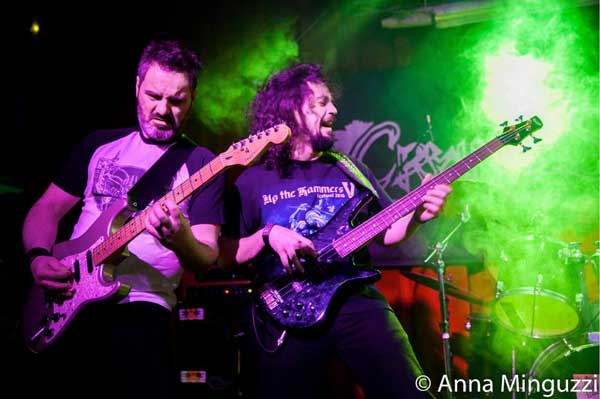 Manolis Karazeris: Yes, I believe so. : Back in the 80s or early 80s, if you wanted to gain some coverage you had to have access to the print media. Now, there are available many online outlets, like Rockpages for instance, that give the chance to up and coming bands to voice their opinions and make their music available to the public. If somebody likes a song, he will share it on Facebook thus much more people will listen to it. I think it’s a good thing.

Rockpages.gr: But nowadays less and less songs are bound to become classics, right…?

Manolis Karazeris: I agree but that’s a sign of the times. There won’t ever be again another…let’s say, “Paranoid” where people will get Goosebumps 40 years later when they listen to it. Every single day you are bombarded with various new songs the majority of which will end up in the obscure zone. That’s why I believe that the future belongs to low budget club shows because the arena bands are slowly yet steadily becoming extinct.

Rockpages.gr: By the way, which was the record that changed your life?

Manolis Karazeris: Manowar’s “Into Glory Ride”. This is definitely the pinnacle of the epic metal sound.

Rockpages.gr: Are you disappointed in them in the last few years?

Manolis Karazeris: Disappointed…hmmm..I am disappointed in their mentality but not in their albums. I can’t ask from them to recapture the glory and the compositional level of the 80s. That’s impossible.

Rockpages.gr: Tell us a few things about the upcoming Up The Hammers Festival…

Manolis Karazeris: We have announced a few months ago the line-up as every big festival in Europe should do so. We have built our own steady fan base and there are many fans from abroad that visit Greece specifically for this event. The upcoming Up The Hammers Festival is almost sold-out yet with the new tax policy, we might even lose money…at the very best, we will break even…that’s sad. I am really looking forward to seeing Eddy Malm from Heavy Load on stage. That will be the very first time where a Heavy Load member will be playing live since the demise of the band.

Rockpages.gr: In the novel where Lovecraft introduces the character of Charles Dexter Ward, he uses various alchemical techniques in order to bring back in life an ancestor of his. If you had the same power, which musician would you bring back to life?

Manolis Karazeris: Brilliant question! Without any second thought, I’d say Phil Lynott by Thin Lizzy…I can’t help but crying every time I listen to his songs. I wish I could have seen them on stage when he was alive and why not meet him and shake his hand. I went to Irealnd a few years ago, saw his statue and paid my respects. It would be a dream come true to me if I had met him in the 80s. 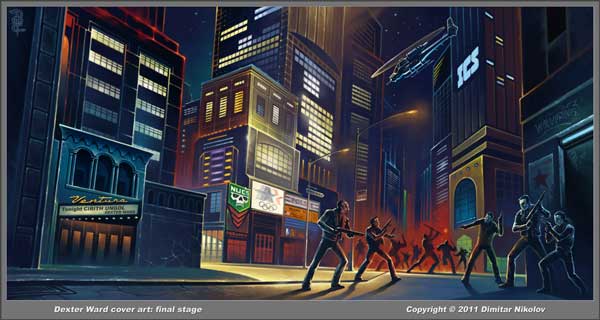