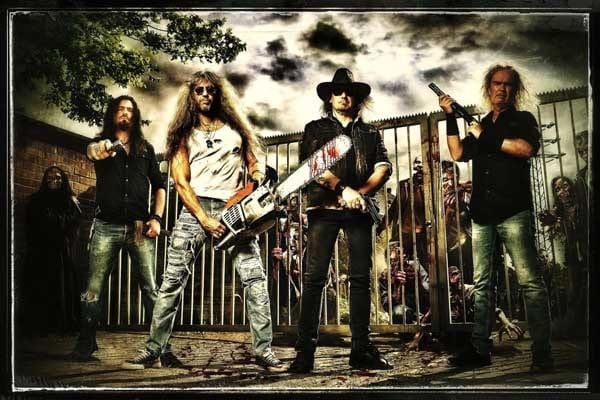 Don’t cross the line or your flesh will be mine!”

It might be the most surprising song GRAVE DIGGER has ever released. After nearly four decades of true German heavy metal, the time has come to reach out to different musical influences. After listening to “Zombie Dance” we know for sure that Polka and Metal fit perfect together. This collaboration with their labelmates Russkaja will make you dance, especially when it’s played live on their upcoming “Tour Of The Living Dead”. Be aware!

Chris Boltendahl on “Zombie Dance”:
“Polka and Metal – is that fitting? With “Zombie Dance” we are opening the gate to hell for every incarnate, true metalhead and GRAVE DIGGER fan. But to be honest … the symbiosis between Metal and Polka turns out to be perfect and calls on everyone to dance and headbang. You wanted PARTY – you’ve got it !!! With “Zombie Dance” and its video we give you a late summer hit in 2018. Whoever stands still or remains seated while this song is played is already dead or not born yet !!”

“Zombie Dance” is the 10th song on their new album The Living Dead which will be released on September 14th via Napalm Records. It will contain 10 songs of True German Heavy Metal that are more relentless than ever…and “Zombie Dance.”

Since their founding back in 1980, GRAVE DIGGER have been leaders in the German heavy metal scene. They created their very own version of Teutonic heavy music – albums like Heavy Metal Breakdown, Witch Hunter or Tunes Of War became classics in the scene.

GRAVE DIGGER will hit the road again in 2019 with a series of headliner appearances on their “Tour Of The Living Dead” opening in Hannover, Germany on January 11th and finishing in Barcelona, Spain on February 3rd. See the full list of dates below.