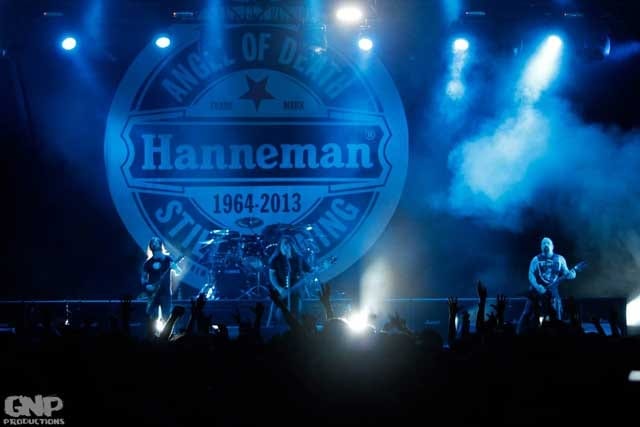 Foteini Paschalidou: I was impatient and curious about the absolute (at least for me) heavy metal event of the summer. After all watching Slayer a couple of months after Jeff Hanneman’s death is a big deal. Moreover another two pioneering monsters of the extreme metal are on the billboard together with Down that are very popular and the up and coming Kvelertak.

This venue is the ideal place (praised many times by the bands), easily accessible as well and the ticket price was rather good. What else would someone want besides bringing Jeff back to life? 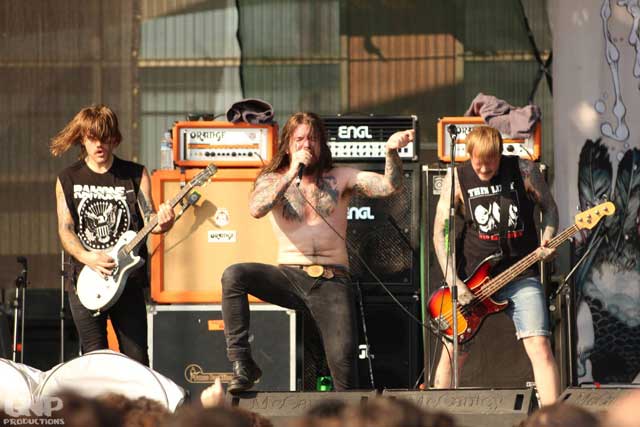 Romanos Terzis: First up on the Heavy by the Sea stage was Norwegian band Kvelertak, who made a good first impression supporting Megadeth at their last Greek show. They did the same now, confirming the hype they have lately in the metal world, with lots of energy and a crowd that grew larger by the minute and reacted positively. Keep them coming.

Foteini Paschalidou: I arrived when Napalm Death was checking the sound. Without any delay the almighty grinders from Birmingham hit the stage with “When All Is Said And Done” while Barney went berserk. By the way this tune has probably become the modern Napalm Death classic that cannot be exempted from the setlist exactly like “You Suffer” and “Nazi Punks Fuck Off” (Dead Kennedys cover). Obviously they were in a mood of causing a stir even if the crowd expectation was not at fever pitch (people were still at work). Of course all eyes were on that jumpy cult frontman called Barney. Mitch’s guitar sound was rather solid; amazing. It was a strong beginning for me as I missed Kvelertak. 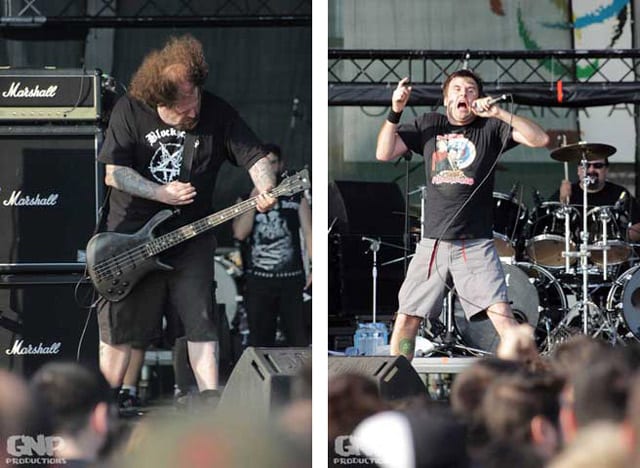 Romanos Terzis: Next up were Napalm Death. The legendary grindcore group presented a blend of old tracks and new stuff from last year’s decent effort ‘Utilitarian’. They went from one two-minute hardcore song to the next, with Greenway performing like he’s on cocaine and has had an epilepsy episode at the same time. They certainly won the moshpit in their honor, plus extra points for their cover of ‘Nazi Punks Fuck Off’ by Dead Kennedys.

Setlist Napalm Death: “When All Is Said And Done”, “Suffer The Children”, “Scum”, “Leper Colony”, “Nazi Punks Fuck Off”, “You Suffer”, “Siege Of Power”

Foteini Paschalidou: Rotting Christ always performs great but this time I believe it was their best show even compared with their atmospheric live performances in clubs. Apparently the music renewal of the last two albums (many folk elements) has a positive effect on them. That could explain the great amounts of energy they had on stage. If they had more time available I imagine we would have listened to more songs from their first pure black metal era (which is my favorite). They caused a stir with “King Of A Stellar War”, “Transform All Suffering Into Plagues”, “The Sign Of Evil Existence” and “Non Serviam”. Same with “Societas Satanas” (Thou Art Lord cover). The younger generation went mad about “Athanatoi Este”, “Chaos Geneto”… The setlist was very well balanced. They were amazing for one more time. 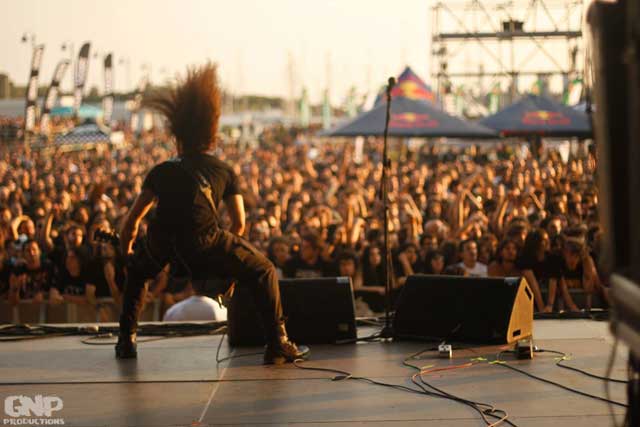 Romanos Terzis: We welcomed Rotting Christ like a big band and they played as one. Tight playing, flawless stage presence and great communication with the fans; those were the elements that characterized their performance. The setlist was ideal for my taste, with three songs from their latest masterpiece ‘Kata ton Daimona Eaytou’, which retained in a live setting the grandeur that they certainly have on record. Chaos erupted thanks to tracks like ‘King of a Stellar War’ and ‘Societas Satanas’ (Thou Art Lord), as well as closing epics ‘Non Serviam’ and ‘Noctis Era’. Congratulations and much respect. 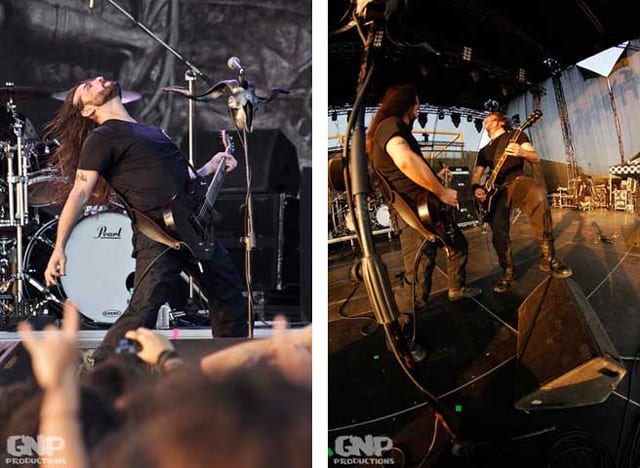 Foteini Paschalidou: I’m not really a Down fan. On the other side I love that crazy Phil Anselmo. The man is able to fill the stage totally on his own and I’m pretty sure he could do exactly the same thing even if he didn’t have to sing a single note. He has a great contact with the audience and gave his on recital of singing while acted like a brat, burping, making fun of everything and after hitting his head with the microphone (which fortunately did not cause him a concussion like he said) he treated us with weed songs (“Bury Me In Smoke”, “Stone The Crow”, “Hail The Leaf”) but didn’t stop there… the rest of the band members (known for being southern/doom metal veterans) were fantastic on stage as well. We are talking about real energy! The crowed went crazy! Especially on the Sabbath-styled  “Temptation’s Wings” or the closing when we all had to sing loud “…and  she’s buying a stairway to heaven…”. In the end Down was the best of all bands and Phil proved himself as the best of all frontmen that night and the other frontment were the mighty Sakis, Barney and Tom Araya, so….. 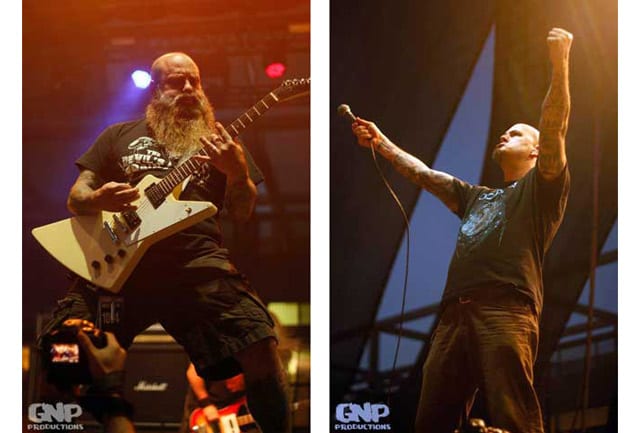 Romanos Terzis: At eight fifteen, with beers in hand, Down casually walked on stage. They happen to have one of the most iconic frontmen in metal though, Mr. Philip H. Anselmo, therefore the beatings in the front rows began immediately. They opened with ‘Eyes of the South’ and ‘Witchtripper’ from their latest EP, but it was the dedicated to Dimebag ‘Lifer’ that really got us in the mood. No words are necessary for the guitar duet of Windstein/Keenan, the night belonged to Phil though, due to his birthday being close, his advise on smoking pot and what was still to come (spoiler alert). The guy clearly had fun and so did we. Down could easily play ‘NOLA’ in its entirety forever and no one would dare complain. The outro riff of ‘Bury me in Smoke’ is still playing in my head.

Setlist Down: “Eyes Of The South”, “Witchtripper”, “There’s Something On My Side”, “Lifer”, “Lysergic”, “Funeral Procession”, “Ghosts Along The Mississippi”, “Pillars Of Eternity”, “Temptation’s Wings”, “Underneath Everything”, “Hail The Leaf”, “Stone The Crow”, Bury Me In Smoke” 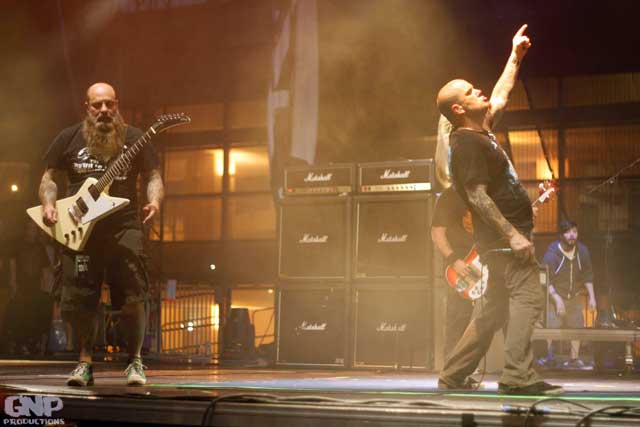 Foteini Paschalidou: We nearly break our necks every time on Slayer shows. The only exception on Greek soil was in 2010 with that ill performance. Having that in mind and given that Jeff Hanneman was a real symbol for the whole extreme metal genre many of us -me included- had a few doubts about the upcoming Slayer gig. Personally I acknowledge what a fantastic drummer Dave Lombardo is but Paul Bostaph and John Dette really complemented him every time needed so I never missed him. On the contrary everything depended on the trinity in the front and that was proved for another time. Jeff cannot be replaced by anyone even by Gary Holt. They kicked off with “World Painted Blood” and “Disciple” in front of a frozen audience and ice didn’t break with “War Ensemble”. Unbelievable, huh? Gary Holt’s guitar sounded like Exodus and extremely loud compared to K. King’s if you attended the show from the left of the stage. They tried hard and did the best they could but still people was left high and dry. 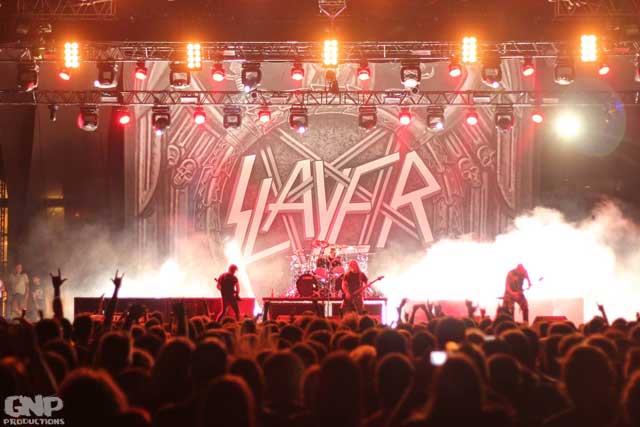 Tom Araya attempted many times to get us moving with his words and classics like“Postmotrem” and “Mandatory Suicide” but it was effortless. Things started getting better with “Dead Skin Mask” and “Seasons In The Abyss” but the situation really changed when the band jammed with Phil Anselmo and they played “Fucking Hostile” (Pantera) as a gift for Phil’s birthday…and there was C H A O S! Right after that a huge flag appeared with the Heineken emblem but it said Hanneman instead dedicated to his memory.  That was followed by the three hymns he wrote and those were “South OF Heaven”, “Raining Blood” και “Angel Of Death”. That caused a huge pit with many us screaming every single lyric. I don’t know how people will accept this line up that seems to me as a permanent line up. When the most important songwriter is gone how far can the band go from now on? I wish them good luck from the bottom of my heart but it seems to me that things are gonna be difficult. 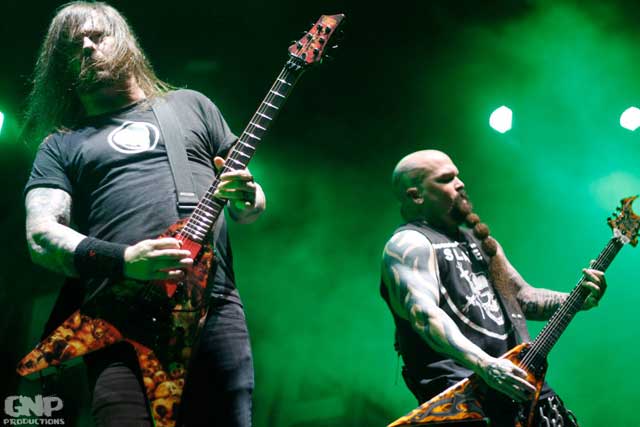 Romanos Terzis: After a short delay, the intro tape to ‘World Painted Blood’ marked the arrival of the headliners on stage. Slayer played like …Slayer, and I say that because they were the ones to set the standard to what a show of otherworldly intensity means. I don’t believe anyone doubts Holt’s and Bostaph’s capability to be in the band, even though we wish two other guys were at their place. Because of those special conditions I don’t think it makes sense to compare the show to previous Slayer visits in Greece. I would expect from the band to put aside their badass image just for a second and mention their fallen band mate, brother and main composer Jeff Hanneman. His name was on one of the backdrops but nothing came from the mouths of either Araya or King. I hoped that the band’s performance would make me forget all that and it pretty much did besides the mediocre sound. 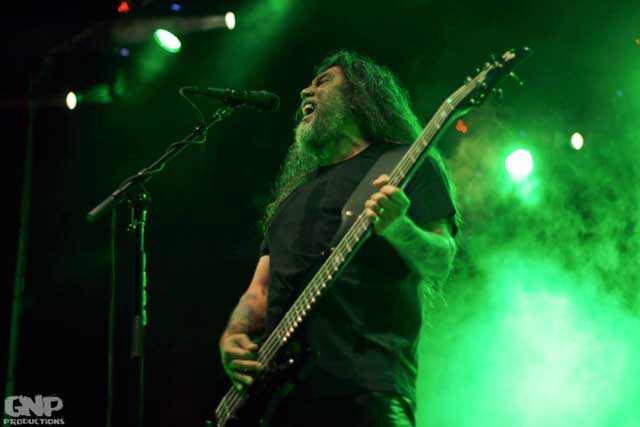 In the crowd there was war throughout the show, most notably on tracks like War Ensemble’, ‘Mandatory Suicide’, ‘Postmortem’ and ‘Dead Skin Mask’. At the side of the stage, huge Slayer fan Phil Anselmo watched, and sang a little on ‘At Dawn they Sleep’, actually bowing before Araya. After ‘Seasons in the Abyss’ he came back though, this time with his own microphone. Before you could say Pantera, ‘Fucking Hostile’ came on… what a shock! Definitely a once in a lifetime moment for those of us who got jealous watching Anselmo sing Pantera tunes with Holt, King, Ian, Benante and others at the Metal Masters meetings. This surprise made up for the lack of rarities on the setlist (they’ve been playing ‘Bloodline’ and ‘Payback’ so far on the tour) and the kind of short performance of 1 hour and 20 minutes. All the classics were there tough; ‘South of Heaven’, ‘Raining Blood’, ‘Angel of Death’ and we were on our way to the nearest hospital in order to be treated. 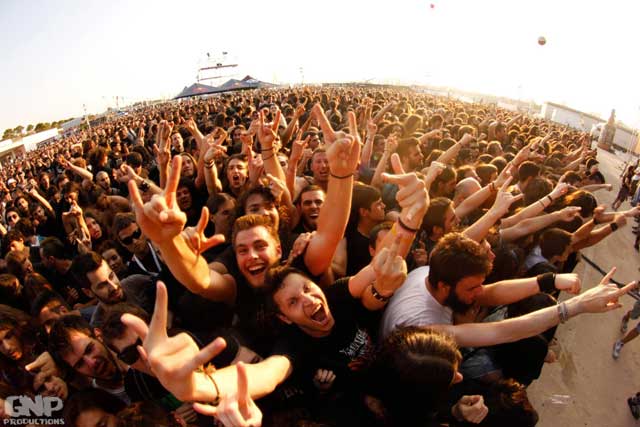