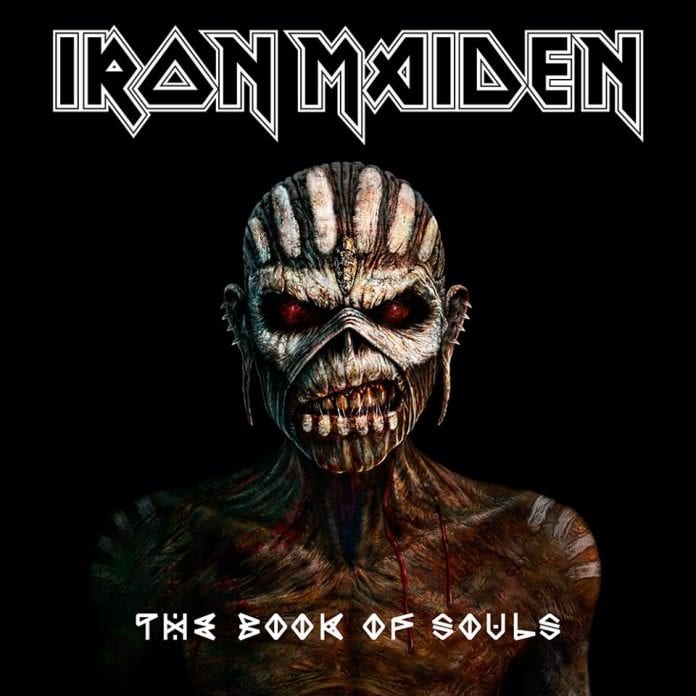 The Book Of Souls – coming September 4th.
IRON MAIDEN’s eagerly awaited new studio album The Book Of Souls will be released globally on 4th Septemberthrough Parlophone Records (Sanctuary Copyrights/BMG in the U.S.A.). It was recorded in Paris with their longstanding producer Kevin “Caveman” Shirley in late 2014, with the finishing touches added earlier this year. However, the band decided to delay its release so that vocalist Bruce Dickinson, who was recently given the all-clear from a tumour, would have time to recuperate sufficiently to join in the preparations for the album’s launch.
The stunning cover art was created by Mark Wilkinson who has worked with the band previously, and because this 11 track album has a total running time of 92 minutes, it is IRON MAIDEN’s first ever double studio album. There’s a broader split on the song-writing compared to previous Maiden records, with bassist and founder member Steve Harris contributing to seven of the tracks; 6 of them with Maiden’s guitarists and one sole composition. This is also the first time since 1984’s Powerslave that an IRON MAIDEN studio album also features two tracks written solely by Bruce Dickinson, one of which is the longest song Maiden has ever recorded! And also two Dickinson/Smith collaborations.
Track listing:
Disc 1
1. If Eternity Should Fail (Dickinson) 8:28
2. Speed Of Light (Smith/ Dickinson) 5:01
3. The Great Unknown (Smith/ Harris) 6:37
4. The Red And The Black (Harris) 13:33
5. When The River Runs Deep (Smith/ Harris) 5:52
6. The Book Of Souls (Gers/ Harris) 10:27
Disc 2
7. Death Or Glory (Smith/ Dickinson) 5:13
8. Shadows Of The Valley (Gers/ Harris) 7:32
9. Tears Of A Clown (Smith/ Harris) 4:59
10. The Man Of Sorrows (Murray/ Harris) 6:28
11. Empire Of The Clouds (Dickinson) 18:01