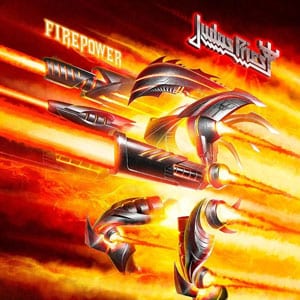 I was anxious and nervous to listen to the new Judas Priest album. On one side it was the great “Redeemer Of Souls” that proceeded in 2014 and on the other was the shock from the news that Glenn Tipton suffers from Parkinon’s and retires from the live shows. Also, after so many losses in our favourite music lately the sorrow and disappointment is evident.

But, the British metal fathers once more stood tall releasing an album that’s worthy of their history and legacy. If you make a parallel with Duke’s speech on “Rocky Balboa” where he says to the 60 year old boxer: “you don’t have speed and endurance, but you know all about the game. So where we focus on is building some hurt bombs that will rattle his ancestors. Every time you hit him would be like kissing the express train”. That’s what exactly “Firepower” is… it’s the wrath of a beast that denies to surrender.

The first songs that surfaces, the title-track, “Never The Heroes” and “Lightning Strike”, was a first taste of something interesting, but the entire album is something awesome. You will find some great tunes in there some of which could have been Priest classics had they been in older albums. All the Priest trademarks are there sprinkled with an enviable freshness. Add the even better production in the mix and you have a massive album darker and more aggressive that “Redeemer…” with some mid-tempos, breaks, melodic solos and a full arsenal of killer riffs. The only song that didn’t move me was “Lone Wolf”. However, “Necromancer” threw me against the wall, “Rising From The Ashes” brings out a different facet of the band which I loved while I noticed “Victim Of Changes” type guitars in the background, “No Surrender” got me jumping and stuck in my head. And that’s not all the stand out tracks…

It’s obvious even for the most skeptical ones that the “injection of youth” with Richie Faulkner’s arrival did the world of good to the band bringing power and inspiration. Priest keep following the path they paved with “Reedemer…”, honoring their past without compromising their quality on album no.18. Will “Firepower” stand the test of time, would it look in the eye “Painkiller”, “Defenders…” and “British Steel”? Only time will tell, but what’s certain is that the fans and metallers in general will embrace this album because it’s amazing to see your heroes still holding the flag up high with majesty, dignity and pride!