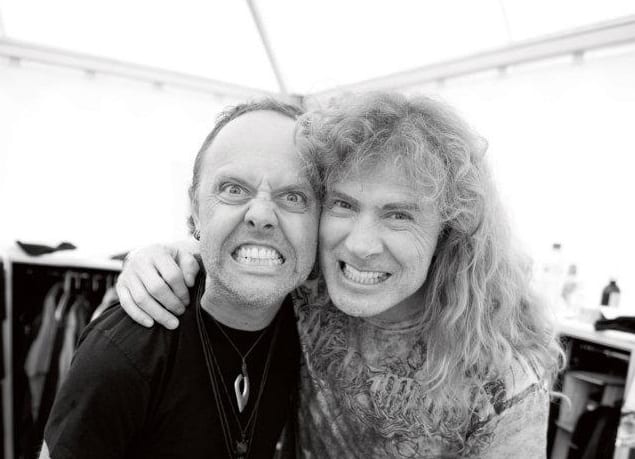 Dave Mustaine has once again commented on the dispute over songwriting credits that apparently contributed to the shelving of the previously announced expanded version of METALLICA’s 1982 demo tape, “No Life ‘Til Leather”.
“No Life ‘Til Leather” was released as a limited-edition cassette for Record Store Day in April 2015, available exclusively in independent record stores. It featured artwork copies from drummer Lars Ulrich’s own personal copy of the original demo, as well as his handwriting. At the time, the band also promised that expanded editions of the demo, which had never before been commercially available, would arrive on CD, vinyl and in a collector’s set.
Last November, Mustaine revealed that he was contacted by METALLICA frontman James Hetfield two years earlier about “officially” releasing “No Life Till Leather” with “27 tracks, pics, the whole enchilada,” but, he said, “the talks broke down because Lars wanted credit on two songs I wrote every note and word to. I have the texts. I passed.”
Earlier today (Thursday, February 8), Mustaine was asked by a fan on Twitter if the disagreement over song authorship is the reason METALLICA refuses to play any more shows featuring the so-called “Big Four” of 1980s thrash metal. He responded: “Who knows. I ain’t giving my songwriting credit to Lars for songs I wrote in PANIC,” a reference to the band Dave was in before he joined METALLICA.