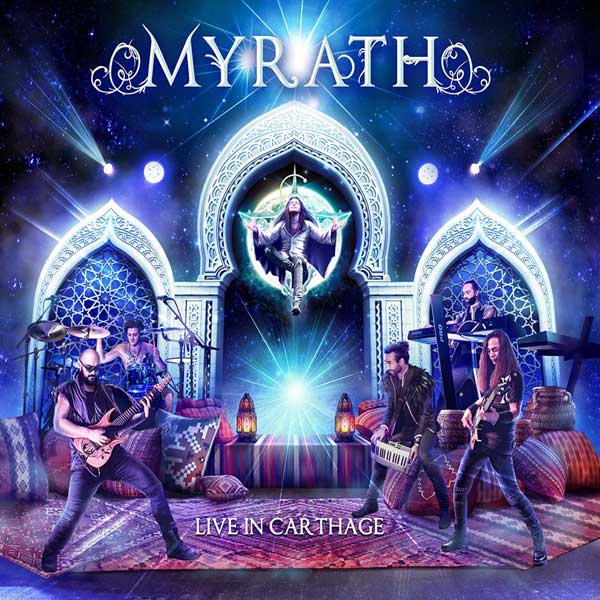 Finally, the time has come. After five studio albums and a growing reputation, it was perfectly normal for Myrath to release their first live release. And they did it impressively.

For those who do not know the band, imagine a combination of prog/power metal and Middle-Eastern influences from their homeland Tunisia. Two bands that immediately come to mind are Symphony X on the one hand and the Orphaned Land on the other, but that doesn’t mean they are copying anyone. Myrath managed to establish their own easily recognizable style right from the start. So, let’s see what they present us in this DVD.

Let’s start from the location. A very nice open-air amphitheater in Carthage, an ancient seaside town near Tunis, the capital of their homeland. Ideal for live performances, with plenty of space on stage for the band, this choice completely justified them. As for their fans, unlike many DVDs I’ve seen lately, they’re perfect. They kept participating with their voices, they lit up the night with their lighters at “Duat” and generally showed that they went there because they really like the band, not to be extras in a live recording.

Now, on to the setlist. Fifteen songs with one hour and a half in duration aren’t much in my opinion. The debut album “Hope” doesn’t have a representative, the second “Desert Call” has only one, the third “Tales Of The Sands” has five, “Legacy” that took them to the next level has seven and the last “Shehili” only three. These are the singles that came out of it, since it had not yet been released when this particular appearance was recorded. There are no indifferent songs, apart from the always annoying drum solo for me, but they could choose three or four more since they weren’t promoting any new work at the time.

As for the stage presence, one word comes to mind: impressive. Video walls in the shape of a pyramid at the back that show various images, carpets and Middle-Eastern decoration, dancers on stage and a band that is flawless. Those who think that all this is graphic, I refer them to those who decorate their stage with swords and dragons. Amazing performance from all the musicians, especially Zaher Zograti behind the microphone is shocking. “Dance” and “Merciless Times”, for example, can confirm this easily.

On the DVD we will also find a making-of of the show, while the CD contains one more track, “Believer”, with the participation of Don Airey of Deep Purple on the keys. An enjoyable release from the Tunisians. Check it out.

Amon Amarth – The Pursuit Of Vikings: 25 Years In They Eye Of The Storm