Nashville Pussy isn’t just another band you will watch at a gig, it’s the essence of rock’n’roll. It’s a guide to this music and its culture. Is a “to do list” for any new bands out there who want to know how it’s done. Their wild performances can raise the dead and those who attend talk about them for the years to come. I am sure that in the Bible of Rock they will be branded as one of its best servants. A few days before they destroy Athens and Thessaloniki Blaine Cartwright talks about the new album, the new drummer and other stuff in a sort but fun –as always- chat. Trivia: Nashville Pussy was the first ever interview that Rockpages.gr did and it was captured on video as well! Interview: Yiannis Dolas 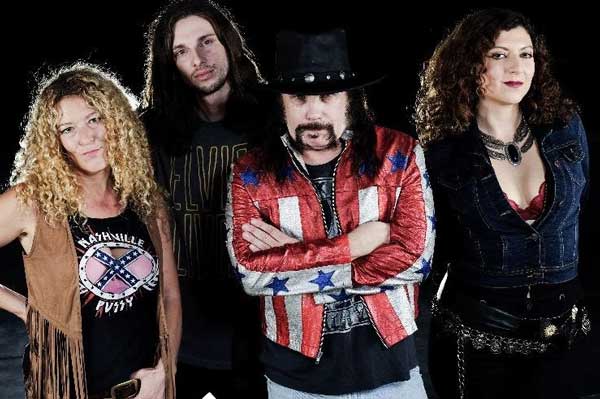 Rockpages.gr: In a previous interview with Ruyter she described the previous album “Up The Dosage” as your “Back In Black”. How would you describe this one?

Blaine Cartwright: Backer And Blacker! Actually I can’t really think of anything to compare it to. It’s really so good and quite unique. I think in the future people will compare other albums to it. Bands will σεbrag that their new album is their “Pleased To Eat You”.

Rockpages.gr: You also got a new drummer, Ben Thomas, how did you hook up with him?

Blaine Cartwright: He was mowing our lawn. No joke. Very cool. Very smart. Young too. He gave us some groove. That’s what everyone is saying.  He was playing in a Guns And Roses tribute band and dance band that played Ohio Players songs. That’s a good combo. Perfect for us! 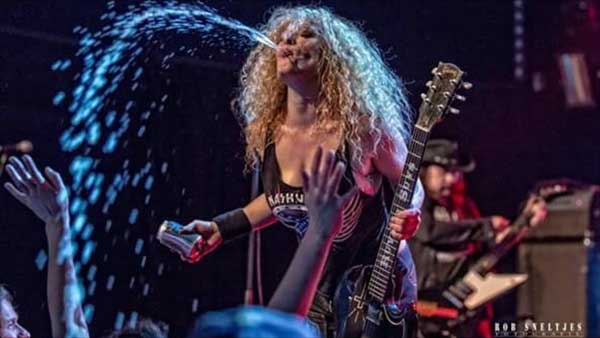 Rockpages.gr: Once more you had Daniel Del Rey producing, what magic tricks did he use this time?

Blaine Cartwright: All of them! I love that guy so much. He’s the new Mick Ronson. He can do it all. His fingerprints are all over this record. Can’t wait to work with him again. He adds something that no one else can.
Rockpages.gr: One of my favourite songs is “Another White Boy”, tell us a bit about it.

Blaine Cartwright: It’s very autobiographical. It started as an actual slow acoustic blues song. The lyrics were cool, but the music was so boring. But I fit them in this cool tune. It’s basically about growing up in the 70’s and learning to play the guitar. There were so many young kids trying to be rock stars when they grew up. Most didn’t even accomplish being in a band. So I guess I did “pretty good under the circumstance”, like the song says. That’s actually a line from the movie Citizen Kane. I see myself as sort of Hillbilly Punk Orson Welles. That might sound weird, but it works.

Rockpages.gr: You shot an interview on your tour bus(?) in France, tell us about that. How did the people react seeing you playing on the bus? Are you travelling with it?

Blaine Cartwright: That was a sight seeing bus for tourists in Marseilles. They transformed it into The Pussy bus for the video. We had no permits to do any of it. We had to constantly dodge the cops. It was quite exciting. Please check out the video on YouTube!

Rockpages.gr: What is your message to the Greek fans who will show up at your show?

Blaine Cartwright: It’s going to be a blast! We’re ready to play. Can’t fucking wait! We’ve always had fun there. Should be crazy! Be prepared to have fun.

Rockpages.gr: On the latest Supersuckers album “Suck It” you are name-checked on the song “History Of Rock’n’Roll”. What is your comment? What can you tell us about Supersuckers after all the adventures you shared together through the years?

Blaine Cartwright: Yeah! They sent us an advance copy. I was listening for our name in the song. They’d be in trouble if they didn’t mention us! I just saw them in Atlanta. Great show. As usual there were Drugs and Rock n’ Roll. That’s happened in several countries around the world with them. No sex though. Just drugs and rock n’ roll. Actually, just remembered about their old guitar player and our old bass player. Whoops! Also, Eddie co-wrote several songs on Up The Dosage. 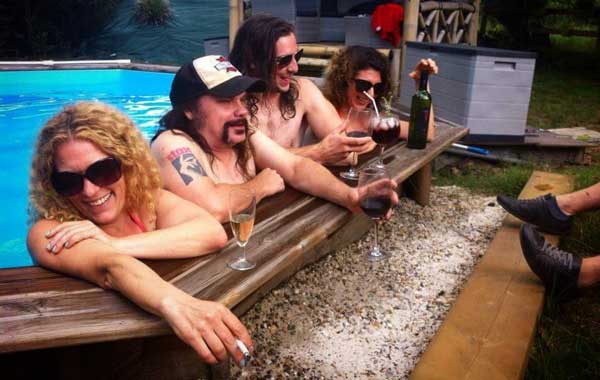 Rockpages.gr: What was the toughest crowd you had to play for, that wouldn’t react to your performance and you weren’t sure if you went down well?

Blaine Cartwright: We opened for The Insane Clown Posse. It was a nightmare. Thousands of dorky teenagers who still live with their parents and probably never had a girlfriend. Seriously. Awful. They hated us. We hated them. Still do. And I usually like everyone. The band was nice, but the fans were useless human jokes. Fuck them.

Rockpages.gr: What is the most weird place you had to play?

Blaine Cartwright: We played a amateur boxing club when we first started. We sat up on the floor and played between fights. It was in Baltimore, I think. 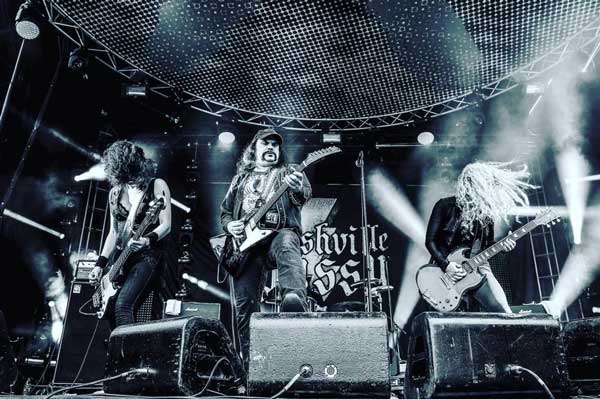 Rockpages.gr: Name one or two bands you like that are criminally underrated.

Blaine Cartwright: More people should know The Johnny Burnette Rock n’ Roll Trio from the 1950’s. They basically invented distorted guitar. The did the Train Kept A Rolling that inspired the Yardbirds. They only recorded for a short time, but it’s very manic and crazy. Timeless fun. I’m also going to say Nine Pound Hammer. That’s my other band. Started 10 years before Pussy. That’s where Pussy got its foundation. We still play. It’s great. Check out Nine Pound Hammer “Bluegrass Conspiracy”. That’s the latest album. It’s so good. Its on YouTube and Spotify.

Rockpages.gr: What would be the perfect job for you if you weren’t a musician?

Blaine Cartwright: If I couldn’t play music, I’d kill myself. Or at least I’d feel like it all the time. I couldn’t imagine doing anything else. It bums me out just thinking about it.  The last actual job I had was driving an ice cream truck. I was the ice cream man! It was fun. But I was playing music too. I guess, if I had to, I’d either be a truck driver or a teacher. Or both. 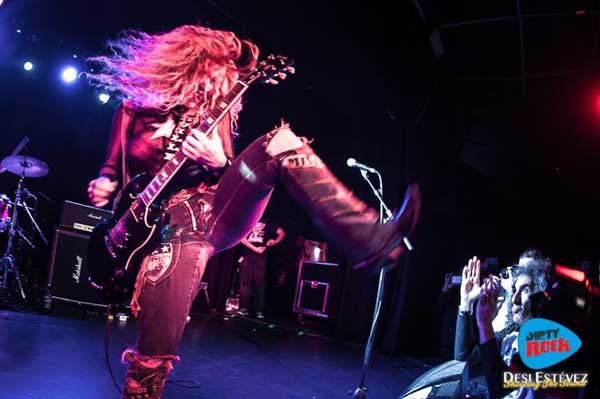 Rockpages.gr: Name a few things you don’t give a shit about.

Blaine Cartwright: I don’t really dig American Football. Just don’t. People here love it. I can watch it if everyone else is. But if it disappeared tomorrow, I wouldn’t care. I like baseball way way better. Go Atlanta Braves! We’re in the playoffs. I’ll probably be trying to watch the games while I’m in Greece. Facebook is another thing. I’m not on it, never have been. Not knocking it, just have no interest. It seems to start political arguments and cause divorces. Everyone looks up old girlfriends and boyfriends on there and sometimes get back together. Also, cell phones and the latest technology. I use an iPhone I was given all the time for work and music. But I have no interest in upgrading or talking about phone plans. It’s boring stuff.   As a band we don’t give a shit about politics. Never have. It’s the last thing we’d ever talk about in the van. Politics is like high school, and I hated high school.

Rockpages.gr: Nashville Pussy walks into a bar… finish the question!

Blaine Cartwright: Nashville Pussy Walk into a bar to have a drinking contest. Which member passes out first? Which member is the last one standing? Come to the show and find out! 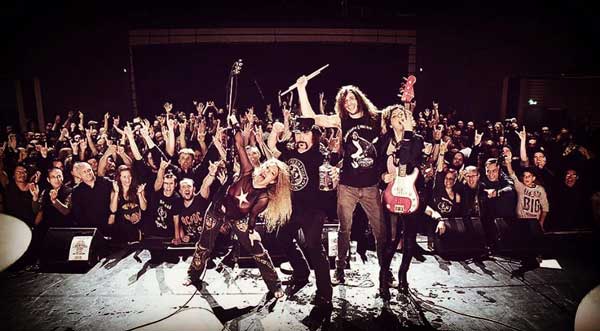