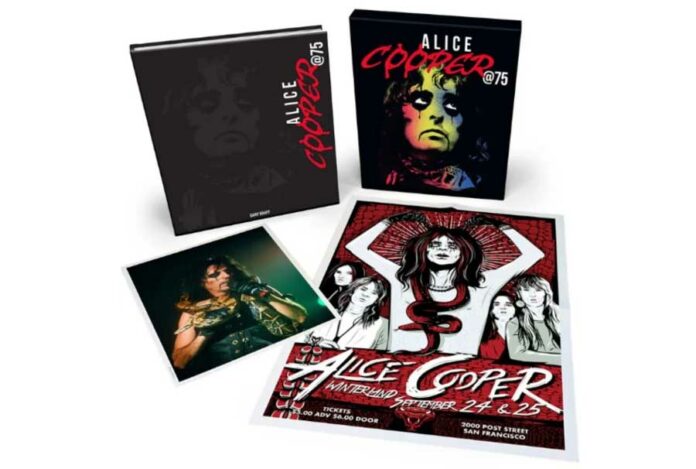 PRESS RELEASE: In this exquisitely produced book, experience the extraordinary life and career of the original “shock rocker” through 75 key releases and events.

Pythons, guillotines, stage blood…Alice Cooper is widely considered the godfather of shock rock thanks to his inventive concoction of vaudeville, horror film conceits, and three-chord rock ’n’ roll. In Alice Cooper at 75, veteran rock journalist Gary Graff shows you this rock icon through the lens of 75 career accomplishments, events, and partnerships:

All 28 studio albums, including those as front person of Alice Cooper the band

A selection of his greatest singles, like the classic-rock standards “I’m Eighteen,” “School’s Out,” and “Welcome to My Nightmare”

Associations with notable guitarists, including Glen Buxton, Nita Strauss, Orianthi, and others

Nonmusical passions like classic cars and, of course, golf

His relationship with wife and entertainment accomplice Sheryl

Beginning with his1969 debut LP Pretties for You and continuing through his latest release, Rock and Roll Hall of Famer Alice Cooper is regarded as one of the most influential performers and musicians in hard rock and heavy metal, influencing countless acts both visually and musically. This book is your unprecedented retrospective of Cooper’s career from teenage garage rocker to international star and celebrity.

The result is a unique and lavishly produced celebration of the iconic and beloved rock star.