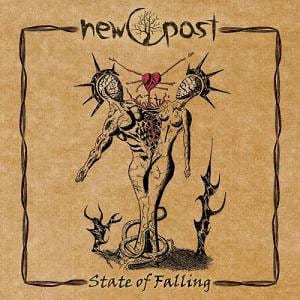 With great anticipation I put on the debut album of New Past, as the live studio videos that they released some months ago showed that something good was on the way. Indeed, “State Of Falling” proved to be a very nice record from a band who did a very nice job.

Alternative/progressive rock with an emphasis on the details of each composition and a very clear sound from the production. The band also seems to be in great from. Kostas Stamatiou on guitars is excellent and Andreas Kapeleris on bass forms a sturdy rhythm section with Manos Agouridis on drums. But the biggest surprise is Andreas Denwar behind the microphone, mostly because he introduced himself in the local scene with extreme vocals in (sadly inactive for some years now) Chthonian Alchemy. But it seems that he has no problem with clean ones, because his singing is amazing in every song.

They work in the lyrics is also great, while the digipak has a terrific artwork (from the hand of their bassist) that makes “State Of Falling” a little jewel for the record case. “Persephone/Descending”, “Break The Fetters” and “Persephone/Ascending” (I could write them all) can prove it easily.

The first try of New Past has a lot of quality and will give them the opportunity to become a distinctive act in the local scene. If the continue like this, they will achieve it in no time.