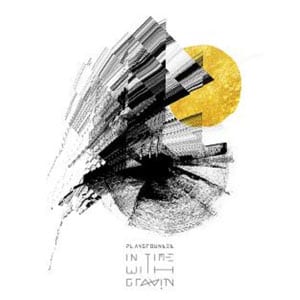 It’s been a decade since Playgrounded was found. It took them five years to release their debut album “Athens” and another five for their new work. During this time the band moved from Athens to Rotterdam in the Netherlands and from there they try to build their name in the scene. A bold move, even if they aren’t the first ones who make this decision.

“In Time With Gravity” is a very interesting album that can be characterized as electronic/progressive rock. The difference between the first album is more than obvious. “Athens” was mostly heavier and in-your-face, while the electronic parts had a more supplementary role. Here we find them calmer, with music that lets you travel, with longer compositions and the electronic parts take the lead to form the final result. The album is twice as long in comparison to its predecessor, almost one hour, something that personally didn’t got me tired because their experimentations kept me interested the whole time. it their influences you will find many different bands, like Riverside, Pain Of Salvation, Anathema and Tool. Some songs that stuck to mind are “Crossing’, “Rotterdam” and the awesome trilogy “The Stranger” in the end.

Playgrounded took the big decision and left Greece for something better. With this release they show that the can make the difference. I hope that the shows that will naturally follow for the support of this release will make their name bigger as time goes by.