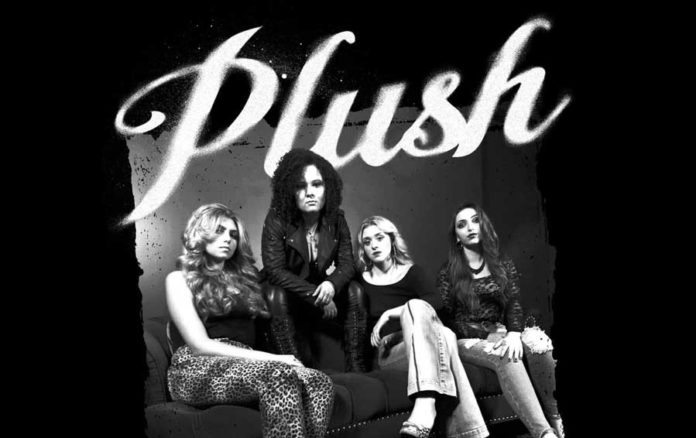 It’s not very often to come across with a band where the average age is under 20 (or is it 19?) but is so mature, with an already established musical identity, talent and inspiration that draws the attention from the very first public appearance, the first gig, the debut album. It’s true that the contemporary Goddess of rock, Lzzy Hale, put her finger in the formation of Plush, as well as the American Voice, where the world was introduced to singer/guitarist Moriah Formica. Above all those four girls are a gang who live their wild dream and is the guarantee that “rock is NOT dead”. Bassist Ashley Suppa and guitarist Bella Perron are interviewed by Yiannis Dolas

Ashley Suppa: I feel like the first album is really just like a picture of who we are as a band right now. And I mean, I feel like all of us are just so open minded to new ideas that I feel like you can certainly see us incorporating new things in the future. I don’t know exactly just what yet, but I’m excited to just continue writing with everyone and still be come up with.

Rockpages.gr: Which bands and artists you’d considered as your influences?

Bella Perron: For me, I really grew up listening to a lot of seventies and eighties rock, and that’s really what I primarily listen to today. So, my favorite bands are Aerosmith, Led Zeppelin. So my guitar heroes as well are like Slash, Satriani, and for Brooke (Colluci – drummer) and Moriah (Formica – lead singer/guitarist) as well I know that they have a handful of totally different influences, so I feel like it’s so interesting writing with everyone. Because, really all comes together.

Rockpages.gr: Most of the songs come from personal experiences I guess, and I see there is a lot of hartbreak and it’s surprising that you are so young but still you had all that experience in getting your hearts broken, but also there are messages about women empowerment in the songs. Was that a deliberate thing? Was in an inspiration coming through a hard time, a difficult relationship, a bad romance?

Ashley Suppa: Yeah, I do feel like a lot of the songs come from very personal experiences, and I love how on the album there’s different songs about the different ways of reacting to these experiences, like “Champion” is about rising above a situation like that.

Bella Perron:  Well, yeah, for sure, and I feel like, you know, the overall message of the album, each song kind of has a different vibe of like how you relate to these experiences and how they make you feel. But I feel that the overall message is just like overcoming this. And that’s why at the end of the album, our last song is “Walk Away”, because it’s really about just kind of getting through things and being able to walk away from the situation and just be a stronger person.

Rockpages.gr: Would you say that being an all-female band and a young band, have you ever experienced sexism against you?

Ashley Suppa: For all of us, I mean, like, yeah, we’re an all-female band, but most of our influences are male, so we  really don’t think of it as a gender division thing. So I mean, you know, we’ll get comments here and there. Sexism is very prevalent in the industry as well as elsewhere, really. But I think if you just don’t let it get to you, if you keep doing what you’re doing, it can’t hurt you.

Bella Perron:  That’s why women empowerment and standing together – not only just women, but people- is so important in times like today.

Rockpages.gr: There is also a song with the title “Athena”, which is a Greek goddess. How did this come up?

Ashley Suppa: Yes, so actually, interestingly, Moriah wrote “Athena” and her pet boa constrictor is named “Athena”, so that was really like the inspiration and then all the lyrics kind of play around that idea that she was is inspired by her snake, but then the idea of the duality between love and war because it touches on the topic of being in love and in a relationship. But, it also symbolizes the goddess of war like having to stand up for yourself, when something like that falls apart.

Bella Perron:  And the metaphor for the snake I find so interesting because it’s a love so strong that it could be constraining, sort of like a boa constrictor.

Rockpages.gr: How would you imagine yourselves 10 years from now?

Ashley Suppa: A year from now? I don’t even know! Ten years? I certainly don’t know that. Hahahah! It’s hard to even know what’s going to happen next week, and I feel like that’s not even just a musician thing, just being a human and existing on this planet that is so unpredictable, it’s hard to tell.

Bella Perron:  I feel like all of us are just taking it day by day. We all have our goals and things we would love to achieve. But, especially right now with how things are… Taking off so fast! We’re going with the flow and seeing where this goes, you know? Yeah, there’s obviously those goals, those values that you keep at your core, but you never know exactly what’s going to happen, whether it’s one year or ten years from now.

Rockpages.gr: Do you have any wild dreams about the band?

Bella Perron: I feel like I’m already living them, to be honest.

Ashley Suppa: Me too, I mean, for all of us, we all started playing so young… Between around the age of five all of us. So, it’s just it’s literally our dreams right now to be out touring and to have an album out.  So I mean, at the moment, I can’t think of anything bigger.

Bella Perron: Yeah, it’s crazy right now. We’re actually on our way to our first show of the Hills from Evanescence tour, and we’re headed to Portland, Oregon, from L.A. So, if you would have asked me this even a year ago, I would have been like, “wait, what?”

Rockpages.gr: Ashley, you had the chance to be a guest on Ace Frehley’s album “Anomaly” when you were very very young (ED she was 6 years old!!!). What do you remember from that experience, recording with Ace?

Ashley Suppa: It kind of came up very unexpectedly, I didn’t expect this to happen, but it was a very good experience. Ace made me feel so comfortable. It was a very professional experience at such a young age, so I thought that was very cool and it was actually the experience that made me want to further my career into music. It really was inspiring to me, and I’m so glad that I could have had that experience because of Ace.

Rockpages.gr: Now, one of Ace’s old bandmates, Gene Simmons, made the famous “rock is dead” comment. What is your comment about that?

Bella Perron: Honestly, I think as soon as you start thinking rock is dead, it’s dead. But when you open your eyes and you start seeing there’s so many new bands, so many kids picking up instruments. And so many kids just love rock and roll… It’s obviously not dead. But if you want to have that mindset, you know Led Zeppelin isn’t playing anymore, so rock is dead, then you’re going to be stuck in that mindset.

Ashley Suppa: If rock is dead, then so am I.

Rockpages.gr: Also, as a band you are influenced by modern artists as well as older ones. The format of your songs is pretty traditional, you have a chorus, a guitar solo. So, would you say that you are old fashioned in that matter?

Bella Perron: I’d say it’s really just a blend of influences, and I think that’s what’s so exciting, I mean, not just about our album, but about so many new bands, because it’s like people are drawing some influence from the ‘60s and ‘70s, but also from, you know… 2015. So, I think you could certainly hear a lot of our influences in this album. It’s like Evanescence, but also you can hear influences from Aerosmith as well. So, it’s kind of just this interesting blend…

Rockpages.gr: Although the band is 2021 and the sound of the band is 2000-something, there are still some ‘70s elements I’d say, that may not be visible in your sound, or the production, but in the making of the songs and the structure of the songs…

Bella Perron: Yeah, I think for a lot of listeners, they might not listen to the album and go like “Oh my God, I could so tell you these are their influences”. I think a lot of structure-wise, like arrangements… And then also for Moriah and I, having a band with two guitar players and going back and forth and layering guitar parts, has some of that old school vibe, you know?

Ashley Suppa: Yeah, as a musician, you sort of grab from all places, all decades and all artists. So it’s really cool.

Rockpages.gr: So, would you say that it’s better to write songs when you are happy? When you are sad? Angry, disappointed?

Bella Perron: I’d say it’s best to write out songs whenever you’re feeling something really strong, no matter the emotion. Because, if you’re feeling not passionate either way, happy or sad or angry, you’re not going to really sit down and write anything powerful.

Ashley Suppa: If it’s coming from a place of emotion, it can be relatable for somebody, and that is a great way to make a good impact.

Rockpages.gr: Outside of the band are you friends? Do you hang out somewhere all together?

Ashley Suppa: Oh, yeah, yeah, we’re all great friends, and we’ve been very lucky that, things really lined up and it was just this instant chemistry, not just musically, but also, all the friendships that have been made through this, especially on the tour, but really just living on top of each other. And we’re just all very thankful that we do get along great because it’s been super fun.

Bella Perron: It makes our days off extra fun, you know?

Rockpages.gr: I left the most difficult question for last… What would you say that are your desert island 5 records, that you’d bring with you?

Ashley Suppa: I’m going to say every Alice In Chains record and then the latest Bruno Mars record.

Bella Perron: I think I’m going to have to go with Aerosmith “Rocks” and Ozzy Osborne “Diary of a Mad Man”.

Rockpages.gr: It was great having you, hope you have a great tour, a great second album, I don’t know if you are thinking and planning about that already…

Rockpages.gr: And maybe we can see you in Greece…